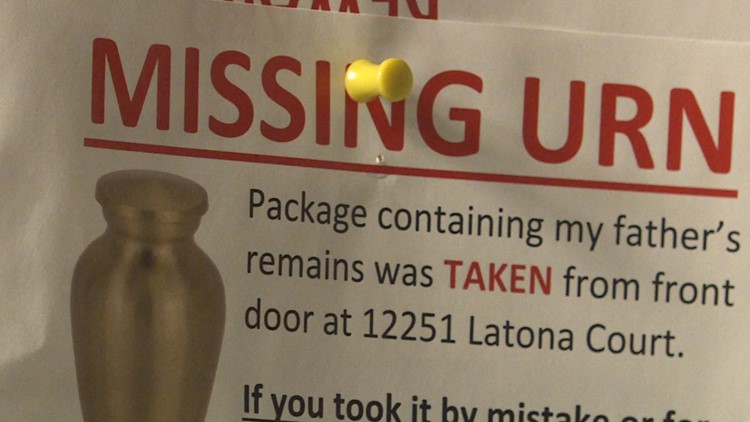 After an urn containing her father’s ashes was delivered to a previous address, a Fairfax Co. woman believes someone took the package with the cherished item inside.

FAIRFAX COUNTY, Va. — Weeks after her father passed away suddenly, a woman in Fairfax County is desperately trying to find an urn that contains his ashes after it was delivered to the wrong address.

June Kim told WUSA9 on Tuesday that her father was 58 years old when he died from a heart attack in December.

After flying down to Texas to organize arrangements, Kim said she put in a request at the funeral home for an urn to be shipped to her home.

However, after weeks of waiting, she became concerned when the package it was in never arrived.

Kim believes the funeral home sent the urn to her previous address after she used a check with that address on it.

Now, with her father’s ashes still missing, she wonders if she will ever be able to find the urn.

“Just losing someone you love very much is very hard. On top of that, you’re going through the healing process and you’re going through it day by day,” Kim said on Tuesday. “Even in death, you want to do the best you can for those you love. It’s difficult to do this for my dad when there’s a part of him unaccounted for somewhere.”

After hearing about the address mix-up, Kim said she rushed over to her previous apartment complex to look for the urn.

She told WUSA9 that other neighbors remembered seeing the package before it disappeared.

“We’ve posted flyers in the apartment complex on all the different buildings. We’ve asked a couple local businesses if we can post our flyer there,” said Kim, who also reported the case to the Fairfax County Police Department and the United States Postal Inspection Service. “It’s just a matter of trying to get the word out.”

MISSING URN:
A woman in Fairfax Co. is desperately trying to find her father’s urn after she believes someone took the package it was in (after it was mailed to the wrong address)

“You don’t even want to think about if someone just threw it away or threw it out.” @wusa9 pic.twitter.com/TP3esLKHcE

During her time living at the apartment complex in Fairfax, Kim said she once had a package stolen while other residents were concerned about thefts.

She believes her father’s urn was taken and hoped whoever took it would return it.

“You’re just disgusted that someone could do that,” Kim said. “Once you open it and you realize what it is, I’m pretty sure it’s pretty clear that it’s an urn with human remains in it. Who wouldn’t just try to return it or at least place it somewhere where it can be found?”

For now, Kim hopes others keep an eye out for the cherished item.

“You don’t even want to think about if someone just threw it away or threw it out,” she said. “Obviously, we would obviously be very happy to have that part of him back.”

Sign up for the Get Up DC newsletter: Your forecast. Your commute. Your news.