A little boy is in hospital in Victoria after falling ill with coronavirus as authorities scramble to figure out how he became infected.

The young child was taken to Melbourne’s Royal Children’s Hospital and is being treated as a ‘mystery case’.

Victoria’s chief health officer Brett Sutton said on Saturday authorities were yet to determine how he had contracted the virus. Health authorities are working to determine how a young boy in Melbourne contracted coronavirus (pictured, testing facility in Shepparton after an outbreak in the town) ‘We haven’t established the acquisition, so we’ll go through that process, as well as finding out who might have been in contact in the 14 days before that child developed symptoms,’ he said.

‘There is no particular concern about childcare but clearly we’re trying to look through all of those avenues around how that infection was acquired.’

Mr Sutton said genomic tracing would be used to help determine how the child was infected.

Victoria recorded just one new case on Saturday and currently has 17 mystery cases.

This followed just two new infections on Friday with the rolling 14-day average falling to 8.1 in Melbourne.

The average however, is still above the target needed for a widespread easing of restrictions. It comes as Victoria recorded just one new infection on Saturday with a string of restrictions set to ease on Sunday (pictured residents walking in Carlton North, Melbourne) Melburnians have spent more than 100 days under the state’s strict lockdown with the city hoping to gain some freedom from Sunday with Premier Daniel Andrews to announce which restrictions will be lifted.

It is understood one of the rules eased would be increasing Melbourne’s 5km limit up to 10km or 20km.

But Mr Andrews said the tough border between Melbourne and regional Victoria would remain.

The changes are expected to be more social rather than economic with pubs and bars to remain closed, with locals instead to be given bigger freedoms to met up with friends and family. 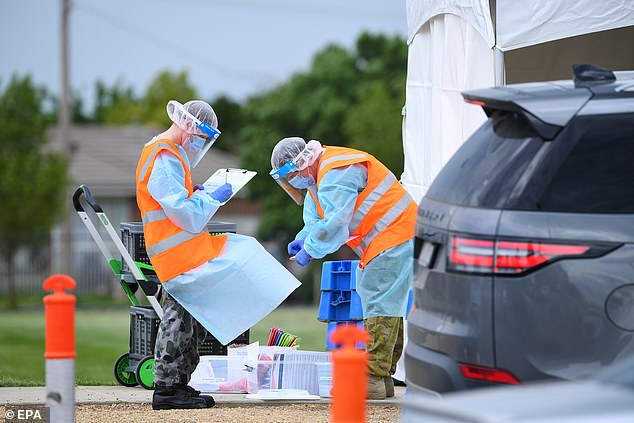 Australian Defence Force workers are seen at a drive-through testing clinic in Shepparton, Victoria on Thursday