A woman who ‘almost died’  from swine flu as a teenager has revealed she still suffers from symptoms 10 years on.

Saffra Monteiro, 26, from Cambridgeshire, contracted H1N1 infection at the age of 15 and believes she caught it from a person in a GP surgery.

She said the virus made her so unwell that she spend months in-and-out of hospital and still struggles to live normally 10 years on.

Saffra revealed she is unable to work full-time because of the after-effects of the illness, telling BBC News: ‘I’m now 26 and nothing has changed. I’m still suffering with the effects that it caused. I’m still very much alone in looking after myself with no other help.’ 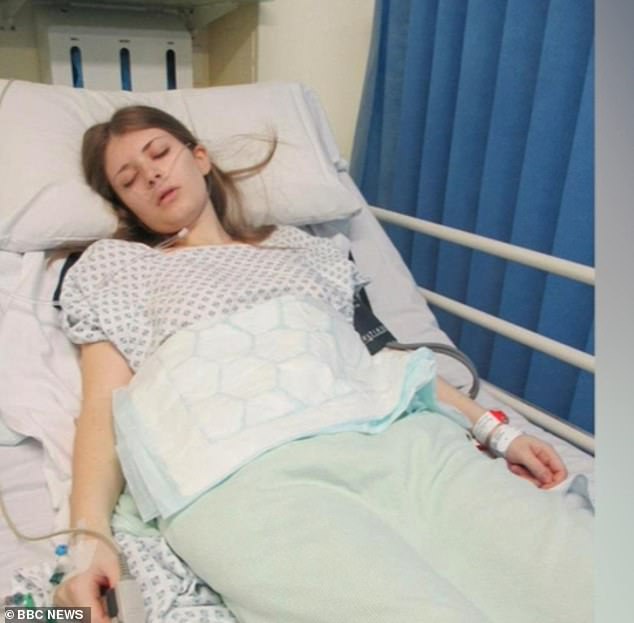 Saffra Monteiro, 26, from Cambridgeshire, who ‘almost died’ from swine flu as a teenager, has revealed she still suffers from symptoms 10 years on 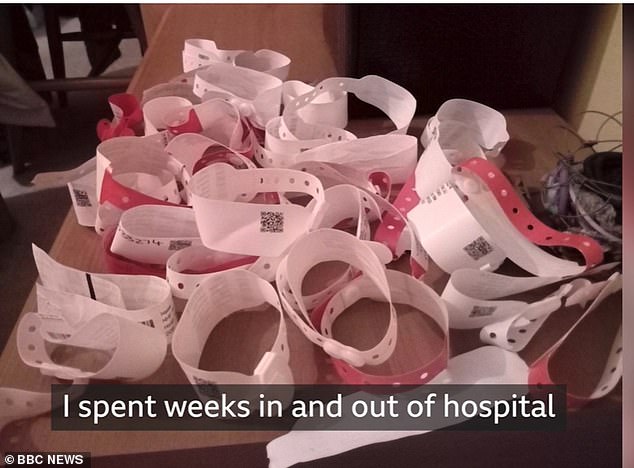 The 26-year-old said her life is still plagued by the after effects of the illness, which she said left her spending weeks in and out of hospital (pictured, her hospital bands)

Saffra explained: ‘In 2010, I caught swine flu and it almost killed me. I was really sick, really sick.

‘It wasn’t what you expected to happen. Bear in mind I was what you would consider a healthy 15-year-old.

Saffra explained she believes she caught the infection while at a GP waiting room, revealing: ‘The guy who was sitting next to me in the waiting room was clearly quite sick. He just sneezed everywhere. It went all over me.

‘It actually only took three days before I felt really, really unwell.’ 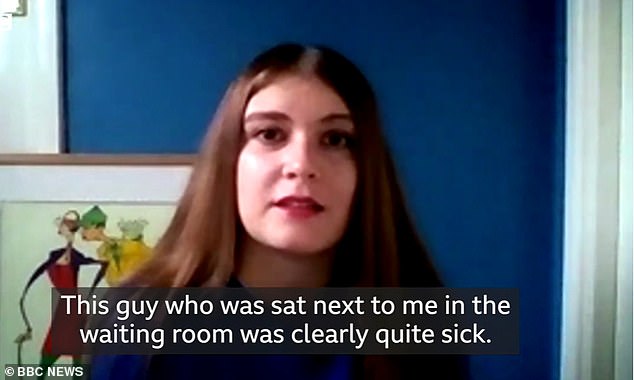 She continued: ‘My mum took me to my GP, they took a swab from me and that came back the next day saying I had H1N1 which is swine flu. It’s not a normal form of flu.’

Saffra explained: ‘At that point, I don’t remember a whole lot because I collapsed and then I was taken to hospital.

‘I spent weeks in and out of hospital and that was like my life. If I wasn’t there, I’d be at home in my bedroom or in my bed or on the sofa in pain or vomiting.’

But despite initially recovering from the infection, Saffra said she faces ongoing health issues caused by H1N1.

What is swine flu?

“Swine flu” was the popular name for the virus which was responsible for a global flu outbreak (called a pandemic) in 2009 to 2010.

It’s a type of seasonal flu and is now included in the annual flu vaccine.

The scientific name for swine flu is A/H1N1pdm09. It’s often shortened to “H1N1”.

The virus was first identified in Mexico in April 2009. It became known as swine flu because it’s similar to flu viruses that affect pigs.

The symptoms are the same as other types of common flu.

They’re usually mild and pass within 1 to 2 weeks.

But as with all types of flu, some people are at higher risk of serious illness, particularly those with underlying health problems.

Overall, the outbreak was not as serious as originally predicted, largely because many older people were already immune to it.

Most cases in the UK were relatively mild, although there were some serious cases.

She said: ‘It damaged my sinus so I cough up all kinds of yucky plegm now.

‘I have all sorts of problems with my digestive system.

‘For two years after I had swine flu, I had seizures pretty much every day. I had a lot of concussions from it.

‘I’m on medication and there are lots of things normal people can do that I can do.’ 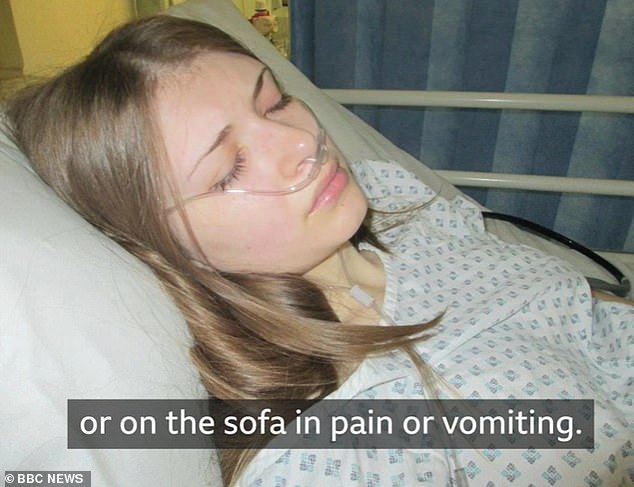 The teenager revealed she was in and out of hospital for weeks after her infection, which she said nearly killed her

The lasting effects have left her unable to work in a full time job and she now spends her time caring for rescued hedgehogs at home.

The 26-year-old revealed: ‘It’s tricky when you’re watching the TV and you see all the attention on Covid and the attention they’re giving everyone suffering from it.

‘And I feel like, I’m standing there waving my arms saying, “Hello, how about me?”

She said: ‘I think Covid victims are going to get a lot of help so that’s very difficult to live with knowing that.’ 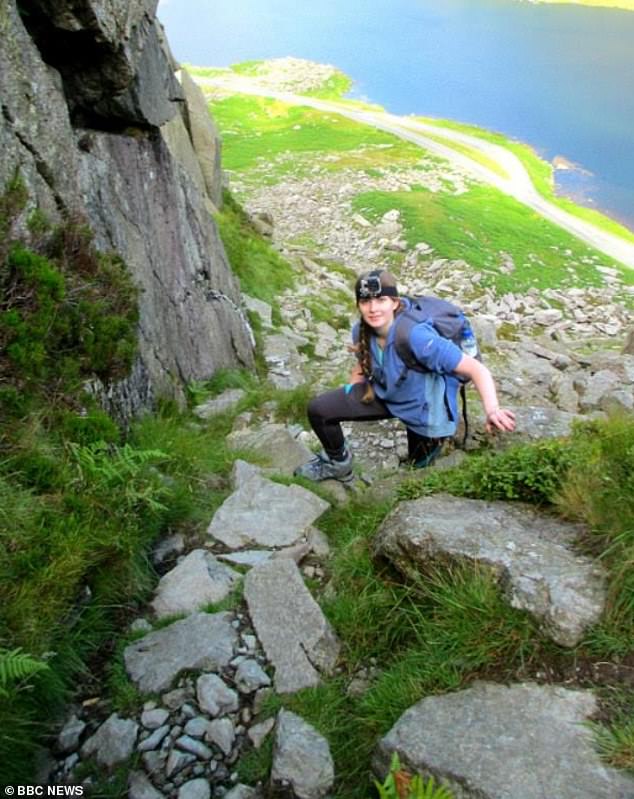 Meanwhile she urged other young people to wear a mask and remain concientious during the pandemic, saying: ‘I still a lot of young people who won’t wear masks or, you know, make jokes about the fact that they’ve got asthma and can’t wear one.

‘It should even be about me, it should be about respecting yourself.’ 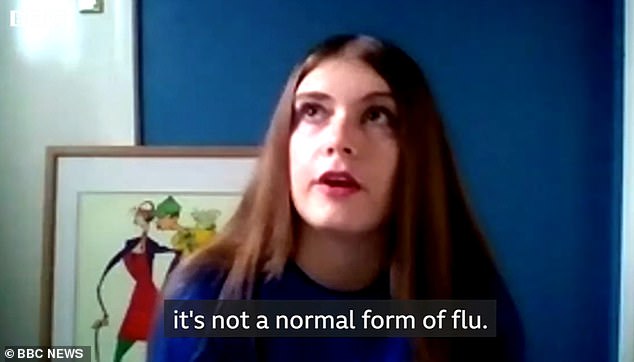