‘The Democratic Party did violence to this country by attacking a president, who I believe was legally elected on November 3,’ Navarro said. ‘If the election were held today, he’d be elected again. And if he runs in 2024, he will be elected then. And I think that’s what the Democrats fear,’ Navarro continued.

Navarro was seething that Trump was impeached by the House of Representatives for a second time Wednesday on charges that he incited an insurrection by telling supporters to march on Capitol Hill, claiming he was the victim of a stolen election. 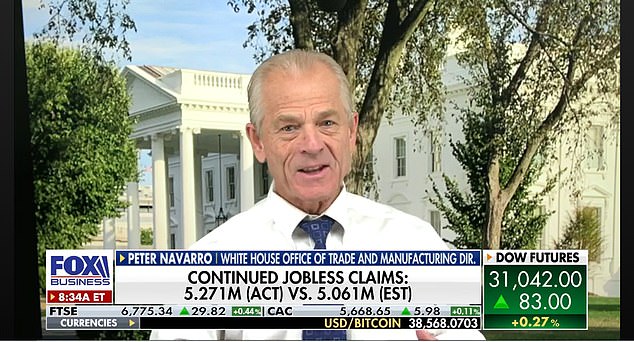 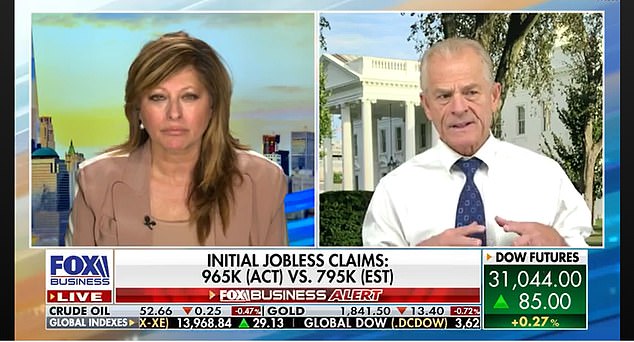 Navarro, the White House’s top trade adviser, continued to prop up those discredited claims by releasing another report Thursday, where he alleges massive voter fraud in key swing states.

The latest volume was entitled, ‘Yes, President Trump Won,’ and counts huge numbers of ballots among the fraudulent – insisting, for example, that Pennsylvania had nearly 1 million ‘possible illegal votes.’

The Trump campaign and other allies were rebuked in court for a number of these challenges.

On Fox, Bartiromo, who’s fueled unfounded election fraud claims herself, started the interview by asking Navarro about the ‘attack on free speech’ – meaning how Trump got booted from social media platforms including Twitter and Facebook after his supporters mobbed the Capitol, in a violent incident that in the immediate aftermath killed five.

Navarro called it a ‘classic collusive oligopoly’ adding that it was ‘kind of new wine in an old bottle.’

The Trump aide said he was angered how Google, Apple and then Amazon took down Parler, which has become an online gathering place for the far right.

‘When Amazon came in for the brutal kill, by taking the cloud away from Parler, as a small company, it was no longer able to access its data and effectively Amazon wiped out that company,’ Navarro said. ‘I think they’ve got a heck of a lawsuit for damages there because of what was done.’

Navarro then turned to Wednesday’s impeachment of Trump, with 10 Republicans joining the Democratic caucus to approve one article.

‘I would be remiss by not saying to you, Maria, that what happened yesterday … was a travesty,’ Navarro said.

He then stated that it was the Democrats who ‘did violence’ by passing the impeachment article.

‘And I’ve never been more pissed off in my life at this place,’ he said. ‘And I think there’s 74 million Americans out there who voted for President Trump who feel exactly the same way.’

Navarro told lawmakers they should give up on impeachment.

Senate Majority Leader Mitch McConnell said Wednesday that he would not bring the Senate back for an emergency session, meaning Trump’s Senate trial won’t begin until after he’s left office.

‘So, I would say to these people on Capitol Hill, knock it off, stop this. Let the man leave peacefully with his dignity,’ Navarro said.  ‘He was the greatest jobs president, the greatest trade negotiator we’ve ever had in the – in this history. And this is just wrong what they’re doing.’