UCLA runner is dismissed from cross country team after video and a text message surface showing him using racist, homophobic, and sexist slurs

UCLA’s Chris Weiland has been dismissed from the school’s cross country and track teams after he was apparently used racist, homophobic, and sexist slurs in a video and a text message.

Weiland was previously suspended from the team over the text message and video, which were never revealed publicly until Monday, but was later reinstated by coach Avery Anderson.

He was then banned permanently on Tuesday after the video surfaced in which he used the N-word as well as homophobic and sexist slurs while complaining that a girlfriend had left him for an African American. According to the Los Angeles Times, the incidents took place before Weiland enrolled at UCLA in the fall of 2019.

SCROLL DOWN FOR VIDEO 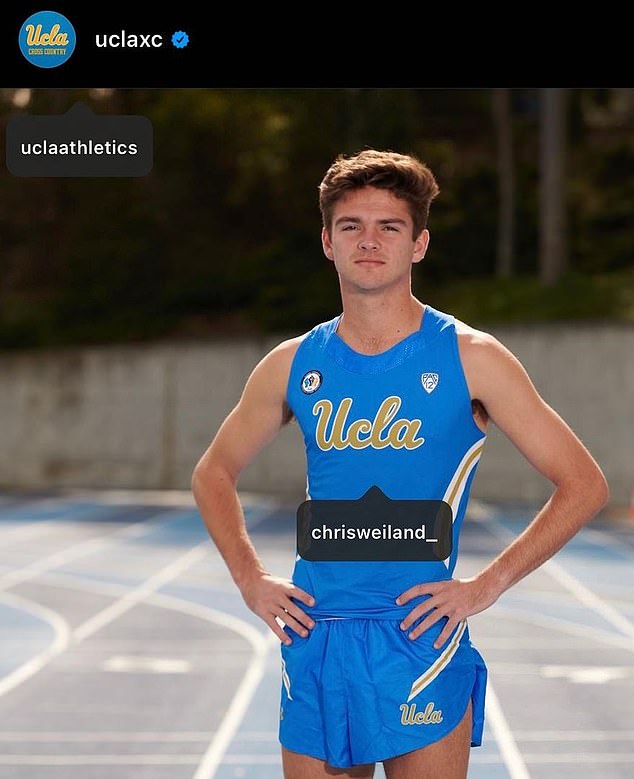 UCLA’s Chris Weiland (pictured) has been dismissed from the school’s cross country and track teams after he was apparently used racist, homophobic, and sexist slurs in a video and a text

‘When first learning of this a few months ago, I was disgusted and immediately suspended him indefinitely from the team,’ Anderson said in the statement. ‘Even in my disgust, as a coach, my intentions are always to lead and educate and make the change happen that I want to see in this world.

‘It became clear that his continued involvement with the team is incompatible with the culture of mutual support and respect we’re fostering,’ continued Anderson, who is African American. ‘I now realize that the decision to reinstate him was not the right decision, and that the action today is best for the well-being of our team.’

On Monday, an Instagram account with the handle ‘@ucla_is_racist’ made several posts showing someone purported to be Weiland making racist comments on video and in a text message. That same account claimed in a caption that ‘this racist behavior was brought to coaches and the athletic director months ago,’ but noted that ‘Chris Weiland is still on the team.’

In the video, which the LA Times has verified, Weiland appears to be complaining about a girlfriend leaving him for someone else: ‘When she said she didn’t want to get back together, why do you think? It’s cause she wants to be with this f***ing f***** who has no future. She’s going to be with a stupid n***** who’s going to be in community college his whole life.

‘He probably lives in the f***ing ghetto.’

At the end of the video, Weiland can be seen with a UCLA sweatshirt.

A text message was also posted by @ucla_is_racist in which Weiland apparently accuses a woman of being unfaithful.

In another caption, Weiland is accused of repeatedly using this kind of language, and not being held accountable by the school.

‘After this racist behavior was brought to coaches and the athletic director months ago, Chris Weiland is still on the team wearing and representing a BLM patch,’ @ucla_is_racist wrote on Monday, before his dismissal.

He most recently ran at Saturday’s event in Tucson, Arizona.

‘As a university that champions itself on the accomplishments of its Black athletes that have broken barriers of social justice, we find it deeply disturbing to learn that UCLA knew about an incident of blatant racism, homophobia, and sexism and did very minimal actions,’ read the statement.

‘We at BSAA refuse to accept the actions of that athlete, as well as the lack of action to address the issue by coaches, staff, and administration.