When filmmaker Garrett Bradley wrapped shooting on her documentary Time in 2018, her main subject, prison abolitionist Sibil “Fox Rich” Richardson, gave her a bag that changed the course of the film. Inside the bag were two decades’ worth of home footage that Rich had made of herself and her six sons for her husband, Rob, during the 21 years she fought to free him from a 60-year prison sentence in the Louisiana State Penitentiary.

Bradley had originally planned for Time, which debuts on Amazon Prime on Friday and for which she became the first Black woman to win Best Director for U.S. documentary at Sundance back in January, to be a sister film to Alone, her 2017 short documentary about a woman whose fiancé is incarcerated. But after receiving the tapes, the 34-year-old director realized that she now had a way to show the long-term and deeply personal effects of the prison system—and more than enough material for a full-length feature. Splicing together her footage from the present day with the home videos, Bradley takes a compassionate, compelling look at one family’s fight not just for prison abolition, but for the hope of reuniting with their husband and father.

“I wanted to show the ripple effect of what it means to incarcerate 2.3 million people,” Bradley tells TIME. “We think about the magnitude of people that are incarcerated, but we have no optics, no sort of visual examples of what that looks like. We’re dealing with an invisible community. In a way, the only way we can bear witness to their experience is through the people who are on the outside.”

The result is a gorgeously expansive, experimental 81-minute feature, with the aesthetics of an art film and a lyrical pacing not often seen in documentaries about the carceral state. Bradley’s velvety footage of Fox follows her tireless work to free her husband from prison, as well as her activism in the prison abolition space and sweet moments with her sons, some of whom are adults now themselves. Bradley chose to focus the film on her subjects’ humanity rather than the details behind the prison sentence. She also presents her footage in black and white, to help it blend with the grainy home videos, which illuminate the personal losses experienced because of incarceration—none of which is felt more than when Fox reflects on how her children have grown during her son Remington’s dental school graduation.

“Time is when you look at pictures of when your babies were small and then you look at them and you see that they have mustaches and beards,” she says, as she looks at her son, now a full-grown man striding across a stage. “And that the biggest hope that you had was that before they turned into men, they would have a chance to be with their father.” 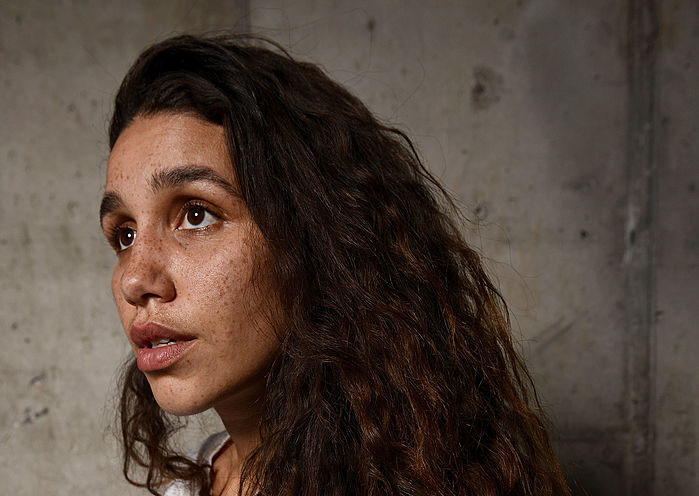 Through the home footage, viewers get a window into the Richardson family’s life over the past 21 years, a glimpse of what Fox preserved for Rob. There are big milestones like birthdays, but the most precious moments to watch are the seemingly banal events of everyday life: Fox as a young woman, hugging her swollen belly, pregnant with their twin sons; their tiny sons screaming with glee on a carnival ride; the boys putting on their socks in the morning; Fox driving the kids to school with the seat beside her empty until Rob can join them. It’s the bittersweet record of a woman and a family who adapted to the absence of their beloved, but who have never stopped longing for his presence.

“Without that archive, we really wouldn’t be able to understand the armor that developed around Fox and around the family,” Bradley says. “Or to see the holistic nature and the revolution that happened within her and the family over the course of 21 years.”

The film’s close focus on the personal moments in Fox’s family’s life, from helping her sons with their homework to her joyful reunion with Rob when he is released early, is a measured decision on Bradley’s part, as is the minimal attention on Rob’s sentence. Viewers learn that Fox and Rob were high school sweethearts-turned-young business owners who resorted to robbing a credit union during tough times, a crime for which they were punished (Fox served 3.5 years in prison, while Rob got sentenced to 60 years without parole). However, the details of the crime come second to the lived experience of the subjects; the documentary is as much the epic love story of Fox and Rob as it is an indictment of a broken system. This was a deliberate choice for Bradley, whose careful consideration can be felt in the intimacy of the current footage and the nuanced approach she takes to framing the Richardsons’ story.

Bradley felt that attempting to explain the reason behind Rob’s harsh sentence would require a full accounting of the role of racism in the U.S. and Louisiana specifically, which then prompted questions about for whom she was making the film. “The film is truly for everybody, in the sense that it’s about love, it’s about the right to intimacy and access to our loved ones, it’s about how love can be a form of resistance. But it is for people who are also directly and immediately experiencing what it means to be an incarcerated family in this country. That’s different than focusing on the trauma and the violence of our history, which is also important, but I find speaks more to people who need to know versus those who already know and don’t want to see that.”

It’s hard not to feel that Time is prescient in this moment, as a national reckoning with race brings issues like prison abolition and racial injustice to the forefront. But Bradley, whose films (including 2019’s America, a dreamy short that reexamines how visual history is told by sampling clips from Lime Kiln Club Field Day, a 1913 film that’s widely believed to be the oldest movie with an all-Black cast) meditate on Blackness and the importance of perspective and reframing history, points out that the need for justice that the film calls for has always been relevant, if not mainstream.

“There’s always been a time for this film. We’ve never experienced a moment in American history where it hasn’t been relevant, where there hasn’t been a call for justice,” Bradley says. “I say that to be optimistic about the future. We are at a major turning point of real radical change and being able to see allyship for the movement in a way that we’ve never seen it before.”

Bradley credits her honor at Sundance to the work of women of color filmmakers before her, and she hopes it is an indicator of the industry moving forward. Next, she’s been tapped to direct a Netflix docuseries about tennis champ Naomi Osaka, and she has a solo exhibit at the Museum of Modern Art debuting next month featuring her film America. When speaking about her upcoming projects, Bradley’s thoughts are often punctuated by her hope for the future during an uncertain time. It’s a continual element running through Time, something she hopes viewers can connect with.

“I think hope can seem really general, but I can’t emphasize enough that there are examples in the film of what resistance can look like, which anybody can achieve—and that is to hold onto your individuality, to hold onto each other as a family and to believe that love is just as powerful as anything else.”