Trees have been brought down as lightning bolts rained down on Sydney on Friday afternoon – while parts of the city were forecast for five-centimetre hailstones and wind speed over 90kmh.

‘Severe thunderstorms are likely to produce damaging winds, large hailstones and heavy rainfall that may lead to flash flooding in the warning area over the next several hours,’ the warning read.

‘The State Emergency Service advises people should move your car under cover or away from trees. Don’t walk, ride your bike or drive through flood water.’

The suburbs of St Clair, Baulkham Hills, Plumpton and Northmead have already been hammered by the thunderstorm. 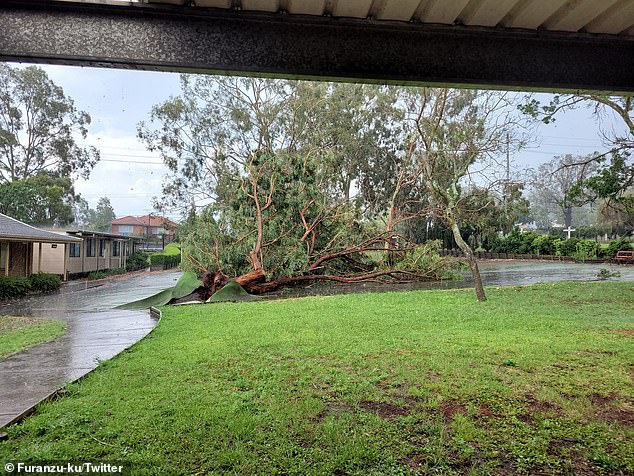 A man filmed a tree (pictured) being knocked over by strong winds and rain during a thunderstorm in Sydney’s west on Friday. The suburbs of St Clair, Baulkham Hills, Plumpton and Northmead have already been hammered by the storm 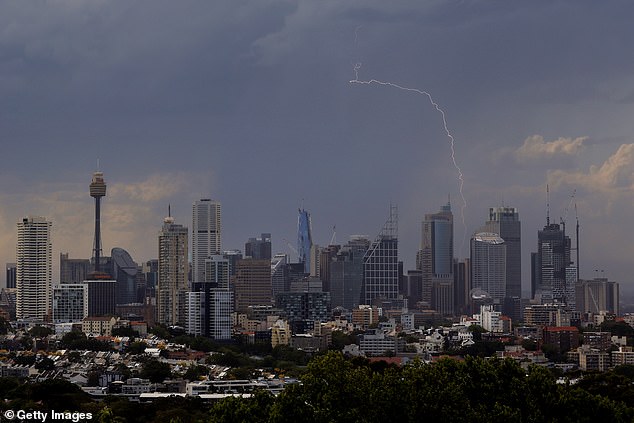 The moment lightning struck across the Sydney CBD skyline on Friday was also captured in a photo, with ominous grey clouds looming in the background

One man in Sydney’s west filmed the storm bringing down a tree and posted the moment to Twitter with the caption: ‘Storm decided it didn’t like that tree.’

The moment lightning struck across the Sydney CBD skyline was also captured in a photo, with ominous grey clouds looming in the background.

Sydney faced northwest and northeasterly winds of 25 to 35 km/h during the day but this is set to switch to gusty southerly winds of 30 to 45 km/h in the evening.

The BoM has issued a specific thunderstorm warnings for the Maitland, Cessnock, Gosford, Wyong and Sydney areas.

It comes after parts of Sydney reached hot temperatures of 30C during the day while Penrith in the city’s west sizzled at a maximum of 38C.

The rest of the NSW coast also sweltered through temperatures in the mid to high 30s while western parts of the state reached temperatures of more than 40C. 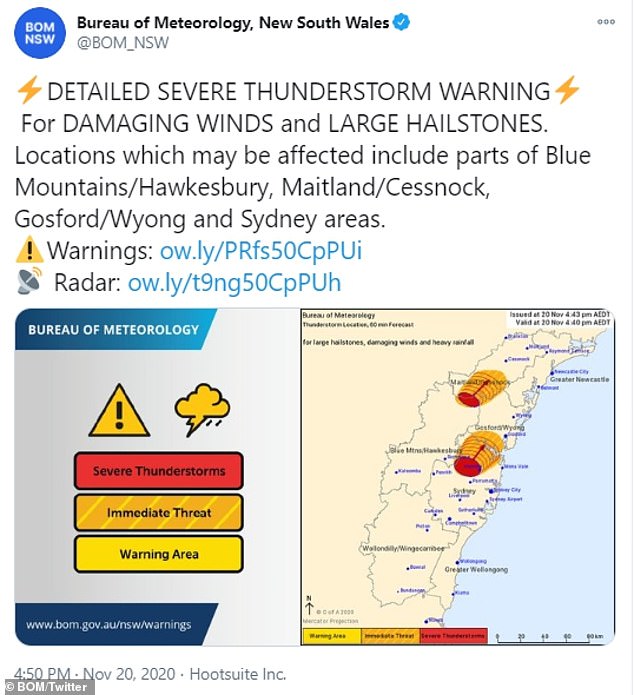 The BoM has issued a specific thunderstorm warnings for the Maitland, Cessnock, Gosford, Wyong and Sydney areas 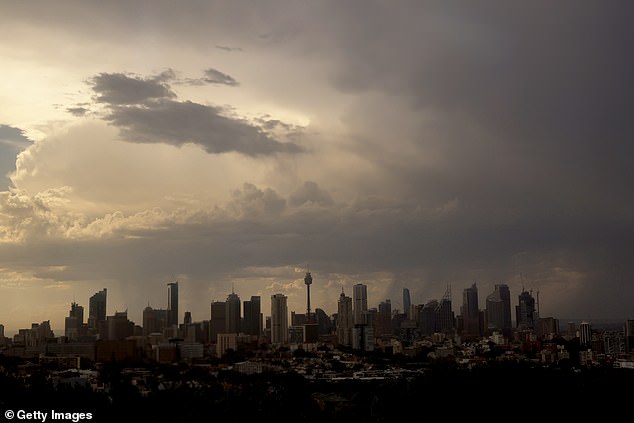 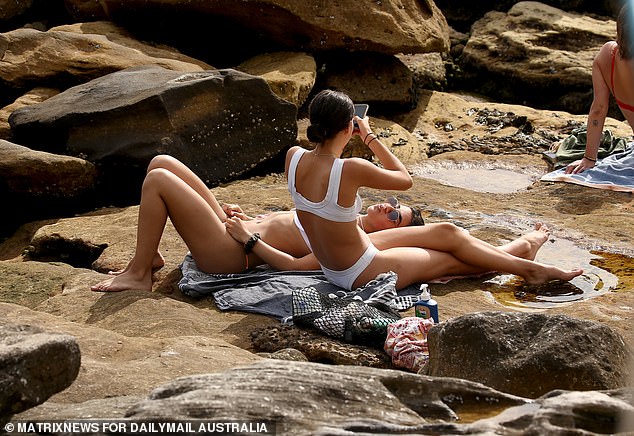 The heatwave is set to continue through the weekend to Monday – providing great beach weather for those near the coast – but temperatures will ease by mid next week.

Monday will see storms sweeping Victoria and New South Wales, with thundery showers and temperatures as low as 13C.

South Australia has already experienced soaring temperatures on Thursday with some Adelaide suburbs hitting 42.2C while the mercury was 5C to 10C above average for the large parts of the state.

The maximum temperature in the state on Friday will be 37C – though Adelaide will escape the worst of the heat with the maximum not quite breaking the 30C mark.

Parts of Victoria had the warmest day since January, reaching 35C, and signalling the southern state is heading into a warm summer.

Melbourne itself will escape the heatwave over the weekend with temperature in the mid 20s and possible showers. 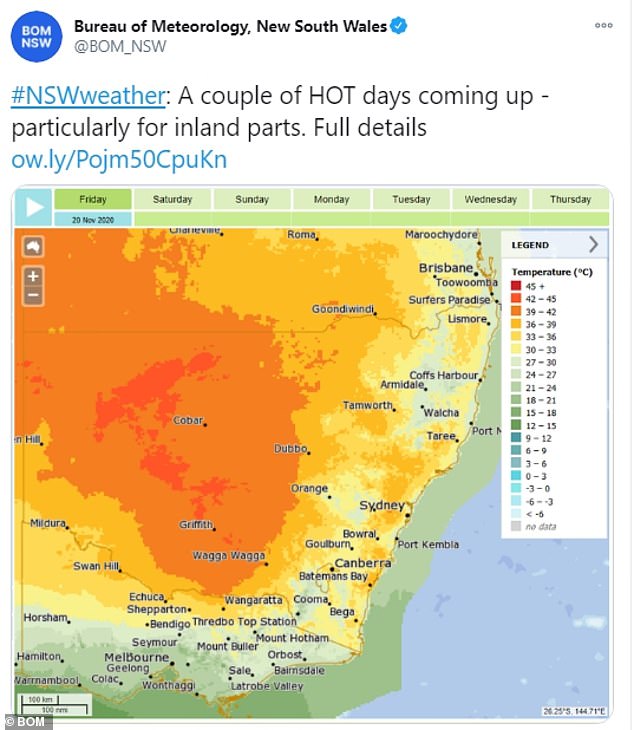 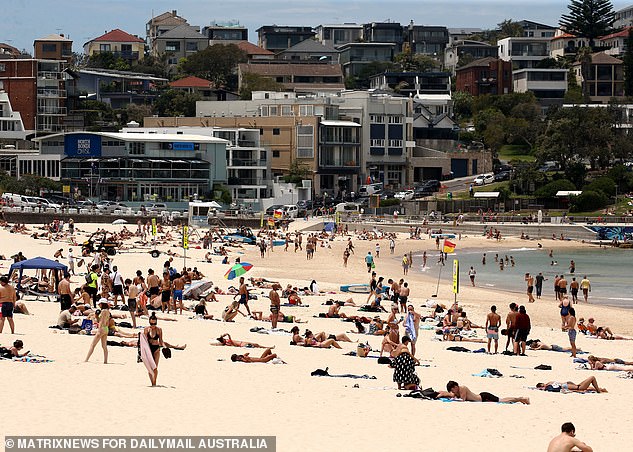 As temperatures warm up heading into summer and COVID-19 restrictions are eased people are flocking to Sydney beaches (pictured, Bondi on November 16) 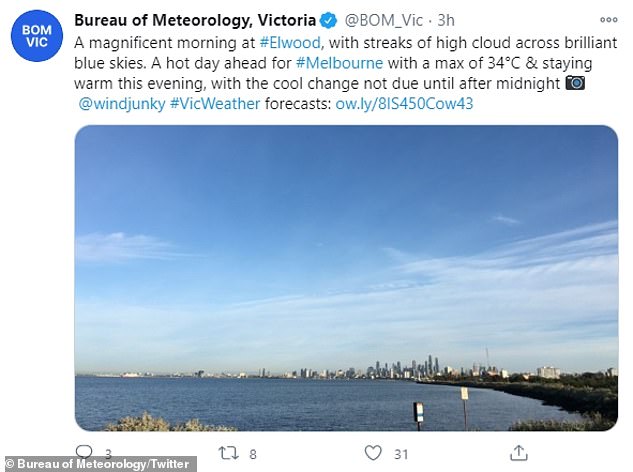 Brisbane will sweat through the weekend with temperatures hitting 30C consistently and climbing to 32C on Tuesday.

The northern part of Queensland will be even warmer with temperatures of more than 30C in Cairns for the next week.

But the real heat will be in the west with Longreach baking at temperatures of more than 40C for the next week.

The northern Territory and northern parts of Western Australia will also see 40C temperatures – though Darwin will be slightly cooler in the mid 30s through the weekend.

Perth will enjoy comfortable summer temperatures this weekend with the mercury hovering around 25C before warming up later in the week. 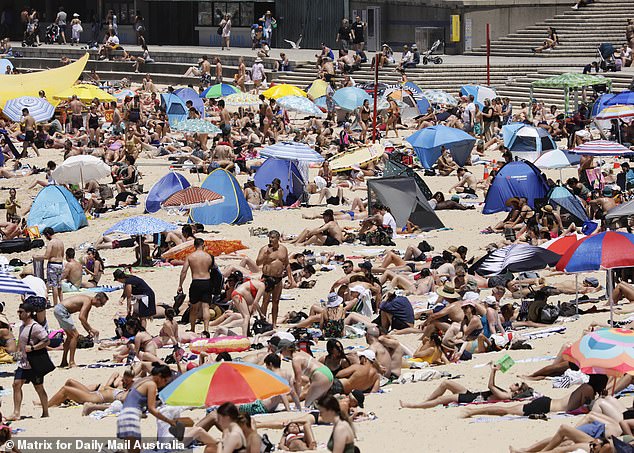 Sydneysiders can expect a hot Friday with a maximum of 30, before the mercury dips over the weekend to highs of 24 and 25 degrees (pictured is Coogee Beach on November 15)