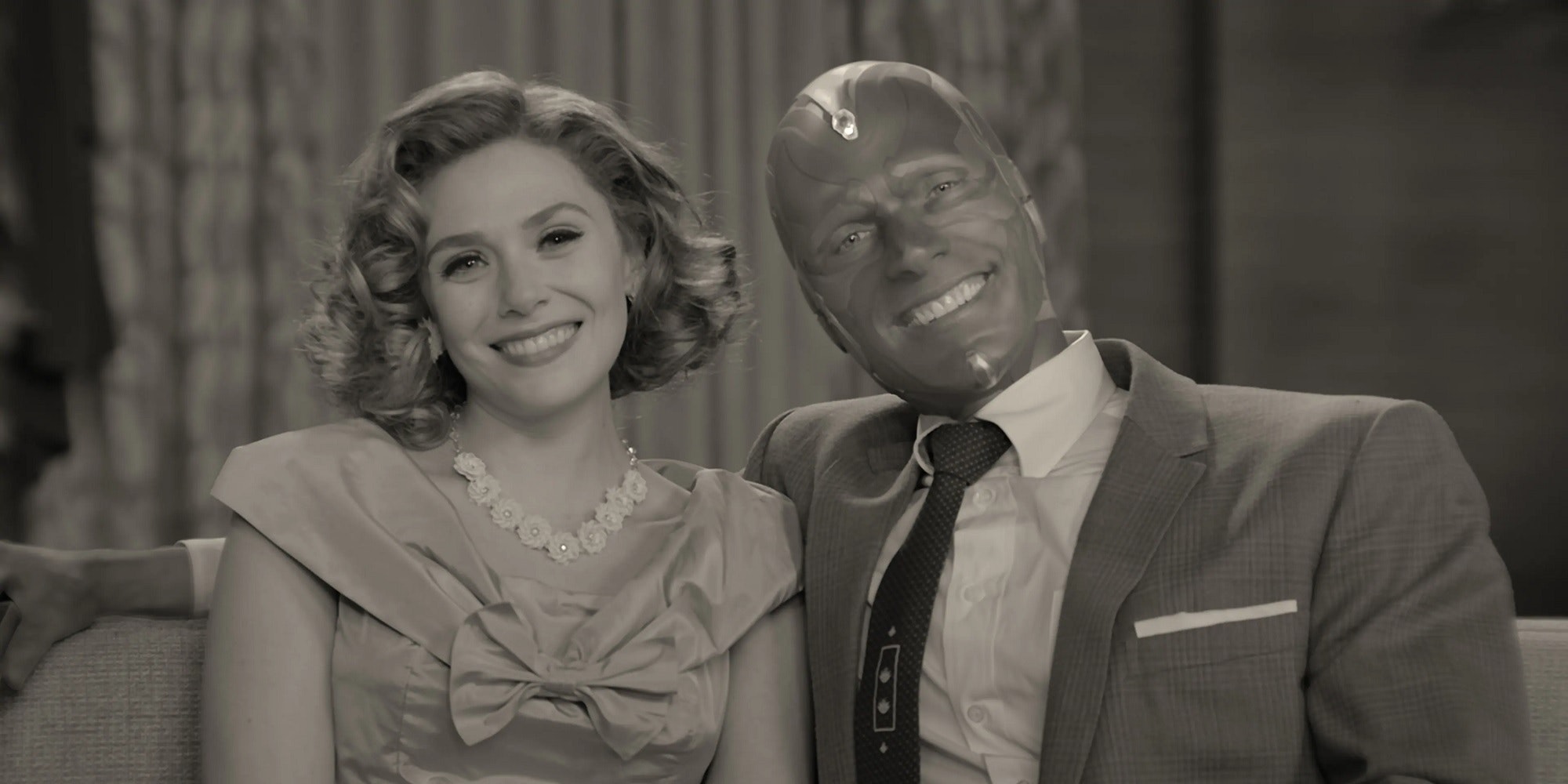 This review is spoiler-free.

What counts as “weird” by Disney and Marvel standards? WandaVision definitely qualifies: A surreal fantasy starring two second-tier Avengers in a series of retro sitcom scenarios, beginning with a black-and-white riff on I Love Lucy and Bewitched. It’s a type of quirkiness that works well for Disney, relying on recycled pop culture references and family-friendly nostalgia. And even as a Disney cynic, I have to admit it’s great fun. Paul Bettany and Elizabeth Olsen are delightful in the lead roles, finally getting their due after some rather limited screentime in the Avengers franchise.

In the comics, Wanda Maximoff (aka Scarlet Witch) and Vision are a longstanding couple: a superpowered witch and an android. Bettany landed the Vision role after years of voicing Tony Stark’s AI butler Jarvis in the Iron Man movies, upgraded to a physical body in the otherwise underwhelming Avengers: Age of Ultron. Meanwhile, the Avengers directors never really knew what to do with Scarlet Witch. Her emotional arc was relegated to background status (not surprising, given the gargantuan cast of those movies), and her superpowers mostly consisted of red CGI light effects and a few holodeck-style illusions. Done right, Scarlet Witch ought to be strange. She ought to be compelling, and powerful, and cool. WandaVision seems like it may actually manage this, at long last.

Created by Jac Schaeffer (writer/director of the great little sci-fi/romcom TiMER), WandaVision borrows from various Marvel comics, including the 2015 reboot of Vision. This comic put its eerily glowing-eyed protagonist in the suburbs, accompanied by a family of matching androids. It followed in the footsteps of Stepford Wives-esque suburban horror stories, as does WandaVision. We’re reintroduced to Wanda and Vision as a happily married couple in 1950s America. Or rather, a squeaky-clean image of 1950s sitcom America, with Wanda as a magical housewife and Vision as an office drone whose punchlines involve hiding his secret life as a robot.

American TV has been revamping and recycling the suburban sitcom for decades, from Leave it to Beaver and The Brady Bunch to Modern Family and The Good Place. TV writers have also been playing with the idea of “nuclear family, but make it weird” since the genre began, with Bewitched and I Dream of Jeannie as the obvious influences here. So yes, Wandavision is riffing on some very old ideas. But what it does, it does well. Joy of joys, Paul Bettany is getting to do comedy again!

It’s wonderfully refreshing to see Vision and Scarlet Witch completely abandon their roles in MCU canon. Obviously, there will be some superpowered explanation for their bizarre sitcom life, where each episode deposits them into a different decade of American TV. The show drops plenty of clues about why they might be trapped in the suburbs, along with numerous Marvel canon Easter eggs. (For instance, Wanda and Vision’s house number is 2800, the code for one of Marvel’s parallel universes.) But personally, I’m happy to just go with the flow and enjoy what Bettany and Olsen are doing.

WandaVision‘s nostalgic pastiches go deep, with careful attention paid to everything from music choices to the actors’ physical mannerisms. Episode 1 gives us a gentle introduction to Wanda and Vision as a comically G-rated cliché of white-picket-fence marriage. Olsen is all wide-eyed charm while Bettany has a nerdy, aww-shucks demeanour, delivering jokes that perfectly fit the 1950s setting. (Naturally, a lot of the humor revolves around marriage and traditional gender roles; something Vision and Scarlet Witch never experienced in their Avengers-era lives.) Things get looser as the show moves on to later decades of TV history, but each era brings a new style of cornball sitcom acting, expertly recreated by the two leads. (We also have several recurring characters including Kathryn Hahn hamming it up as a nosy neighbor, but this really is Bettany and Olsen’s show.)

Arriving in a weekly half-hour format, WandaVision does for vintage sitcoms what the MCU did for Marvel comics. It’s accessible to everyone because we’re all familiar with the basic tropes of the genre. But if you’re someone with a deeper knowledge of classic sitcoms, then you’ll have plenty to chew on.

The post Review: Vision and Scarlet Witch finally get their due in Marvel’s sitcom pastiche ‘WandaVision’ appeared first on The Daily Dot.