Premier Annastacia Palaszczuk has opened the border to residents in regional New South Wales from Tuesday, but decided to lock out Sydneysiders indefinitely because one mystery case of coronavirus was recorded on Thursday.

Mr Joyce said the decision would mean hundreds of flights will not be scheduled and hundreds of his staff will remain without work.

‘Frankly this is ridiculous,’ he said in a statement. 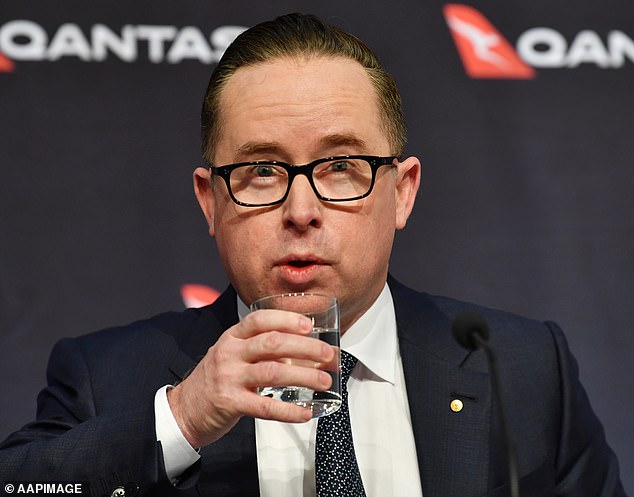 ‘Sydney is the biggest city in Australia and it probably has the best track record globally of managing a virus that is clearly going to be with us for a very long time.

‘Keeping the doors bolted to places that you can’t reasonably call hotspots makes no sense from a health perspective and it’s doing a lot of social and economic and damage as well.’

All other states except Western Australia have opened to New South Wales.

‘Queensland may find that by the time it does open up to Sydney, people may have made other plans.’

Qantas and Jetstar were due to schedule 1,000 flights from Sydney to Queensland in November. It is not clear how many will now go ahead.

Ms Palaszczuk, who faces an election on Saturday, previously said she hoped to ease her state’s hard border with NSW on Sunday after it was re-imposed in August to stop the spread of coronavirus.

But she has pushed the opening back to Tuesday and banned residents from all 32 Greater Sydney local government areas on the advice of Chief Health Officer Jeannette Young.

Dr Young said she gave that advice because Sydney suffered four cases of community transmission on Thursday, one of which could not be traced to a known contact. 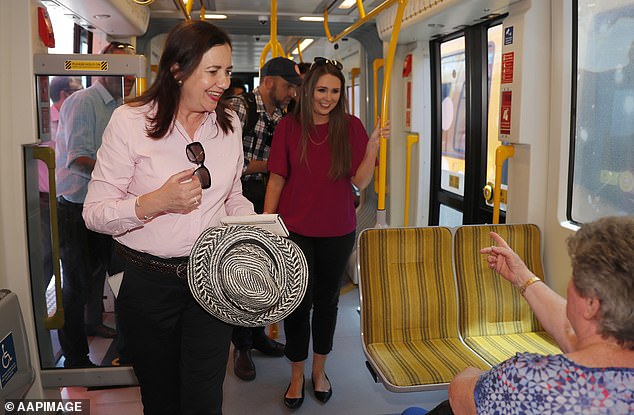 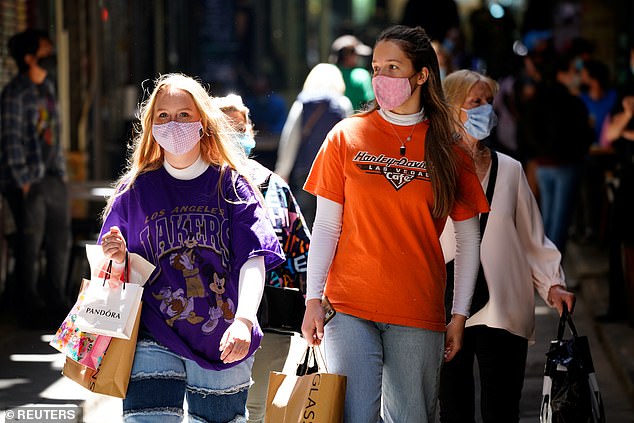 Victorians (pictured in Melbourne) remain banned from Queensland and all other states except the Northern Territory where they must pay $2,500 for hotel quarantine

New South Wales residents who have been outside Greater Sydney for 14 days will be allowed to enter Queensland from 1am on 3 November.

They will be allowed to fly from Sydney Airport but must not stop anywhere else in the city.

Victorians remain banned from Queensland and all other states except the Northern Territory where they must pay $2,500 for hotel quarantine.

Dr Young previously said the NSW border would not be opened until the state went 28 consecutive days without mystery cases.

‘Yesterday they had four new cases and one of those cases they could not link to any other known clusters,’ she said.

‘Sydney is one city and people move around that city. That is why those 32 LGAs all need to be declared hot spots. Outside those 32 LGAs, there have not been any cases in the previous 28 days.’

Dr Young added: ‘They have cases there that they do not know about that are spreading in that community. It is all about unlinked cases.’

Asked when Sydneysiders will be allowed in, she said: ‘You asking me to look into a crystal ball. I genuinely do not know. It depends what happens with the virus.’ 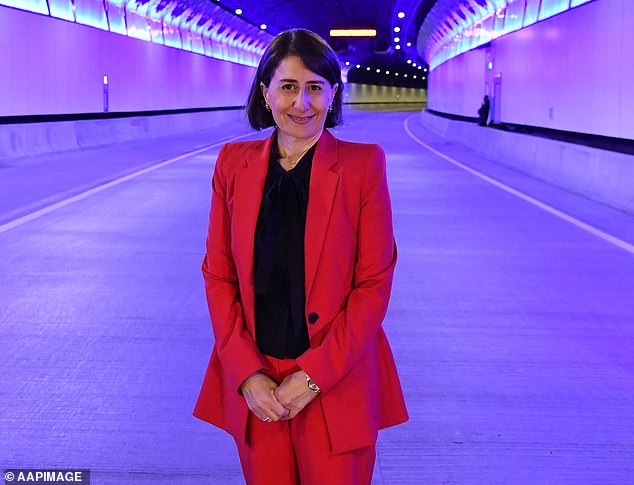 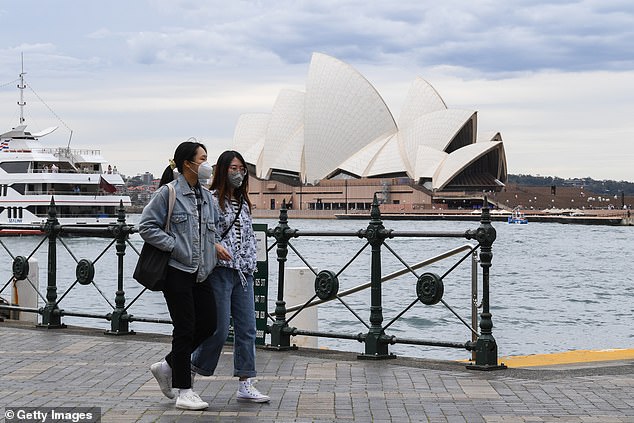 The ban on more than five million Sydney residents will devastate Queensland tourism businesses who are desperate for cashed-up customers while international travellers remain banned indefinitely.

Asked about the suffering imposed on businesses, Ms Palaszczuk said: ‘I know it’s very tough for our tourism industry and that is why we have provided so much support.’

She said Dr Young did not offer any alternative options and she took her recommendation ‘lock stock and barrel’.

Queensland’s rules for keeping the border closed are much stricter than the federal government’s definition of a hotspot, which states a city must suffer 30 local cases over three days to be considered a risk.

New South Wales has only suffered eight local cases in the past week with only five over the past three days.

On Thursday NSW Health issued a serious alert for several venues across Sydney.

Anyone who attended Westfield Bondi Junction, in Sydney’s eastern suburbs, on October 24 between 1.30pm and 4.30pm was told to monitor for symptoms after a confirmed case visited.

In western Sydney, Flip Out Prestons Indoor Trampoline Park, a kebab shop, a chicken restaurant and a marketplace were also put on alert.

On Thursday NSW Health issued a serious alert for several venues across Sydney.

Anyone who attended Westfield Bondi Junction, in Sydney’s eastern suburbs, on October 24 between 1.30pm and 4.30pm was told to monitor for symptoms after a confirmed case visited. 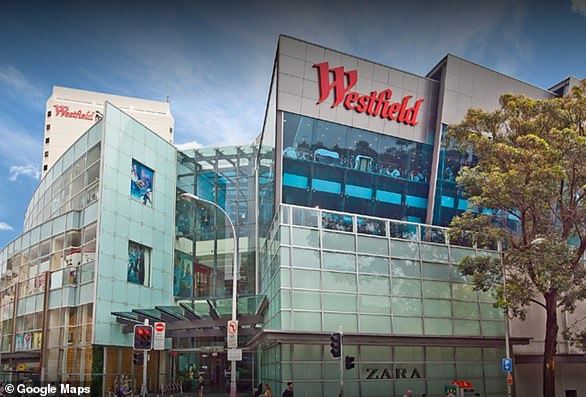 Anyone who attended Westfield Bondi Junction (pictured), in Sydney’s eastern suburbs, on October 24 between 1.30pm and 4.30pm must monitor for symptoms

Meanwhile venues in Sydney’s west have also been put on high alert, including Flip Out Prestons Indoor Trampoline Park and Jasmins Lebanese Restaurant in Liverpool.

The hours for the trampoline park are between 12pm and 1.50pm on October 25, while a positive case was at the restaurant on Sunday between 2pm and 3.30pm.

Anyone who visited the trampoline park or restaurant for more than an hour must immediately isolate for 14 days regardless of their test result.

NSW Health has warned attendees of three other venues to get tested if they experience COVID-19 symptoms:

‘We’ve got to get going again and do it safely.’

He challenged Ms Palaszczuk to release the health advice she took before making the decision.

‘Make decisions on the basis of health advice and be transparent about it. It’s just very hard often to get a clear steer on what’s behind these decisions,’ he said.

‘The length those premiers have gone to is beyond the realm of logic,’ she said.

All states and territories except Western Australia have told the prime minister they want to remove borders by Christmas.

WA premier Mark McGowan, who faces an election in March and has gained popularity with his hard border closure, refused to take part in the plan.