A police marksman shot dead a dog living under a ‘suspended death sentence’ after it mauled its owner, her father, a student and a kitchen worker in a vicious spree.

American pitbull-type Hugo was taken into police custody early last summer so he could be assessed due to his breed, but was deemed safe to remain living with his owner Rebecca Porteous, under a contingent destruction order imposed by magistrates.

Just weeks later, the animal, who could jump up and open door handles with his paw, escaped from his home and garden and tried to attack another, much smaller dog, before then turning his terrifying aggression towards people. 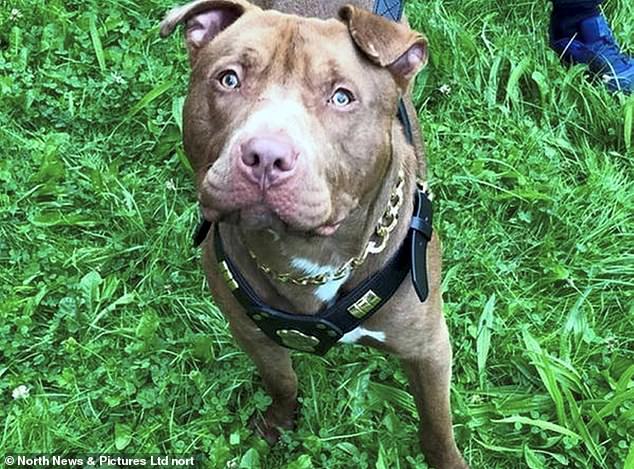 American pitbull-type Hugo, pictured, was shot dead after mauling his owner, her father, a student and a kitchen worker in a vicious spree

Newcastle Crown Court was told Hugo bit the finger of a young student who had been walking the ‘very small’ dog in Hebburn, South Tyneside.

When school kitchen worker Michelle Green, who lived nearby, saw what was happening and stepped in to help, Hugo bit her thigh and caused extensive damage to her arm that needed plastic surgery.

The court heard when Porteous realised what was happening and tried to stop the attacks, Hugo then mauled her hand, forearm and thigh.

And after she called for help from her father Mark Porteous, he too was attacked when he arrived at the scene and suffered a bite to the forearm that required antibiotics.

The court heard specially trained police marksmen were drafted in and Hugo was shot as he tried to get back into his house, where Porteous lives with her young child.

Porteous, 22, of Whickham Road, Hebburn, admitted being the owner of a dangerous dog that has caused injury.

The court heard Hugo had originally belonged to Porteous’s partner, who died last August, and she assumed responsibility for the animal.

It was early last summer that Hugo was taken into police custody, where he was assessed by expert vets, and it was determined he ‘was not an immediate danger and was of a particularly calm temperament’.

A contingent destruction order was issued by magistrates on August 14 last year, which meant Hugo could live under a ‘suspended death sentence’ as long as he was muzzled in public, underwent castration and a fee of £90 was paid to DEFRA.

It was concluded Porteous, who has never been in trouble before, was a fit and proper person to look after the animal.

The court heard she complied with all of the requirements but struggled to pay the £90 fee due to financial difficulties.

It was on October 15 Hugo carried out the attacks.

The court heard the teen who was bitten needed antibiotics to treat his injury and the dog he was walking was also injured.

Michelle Green suffered pain and inconvenience and has been left scarred. 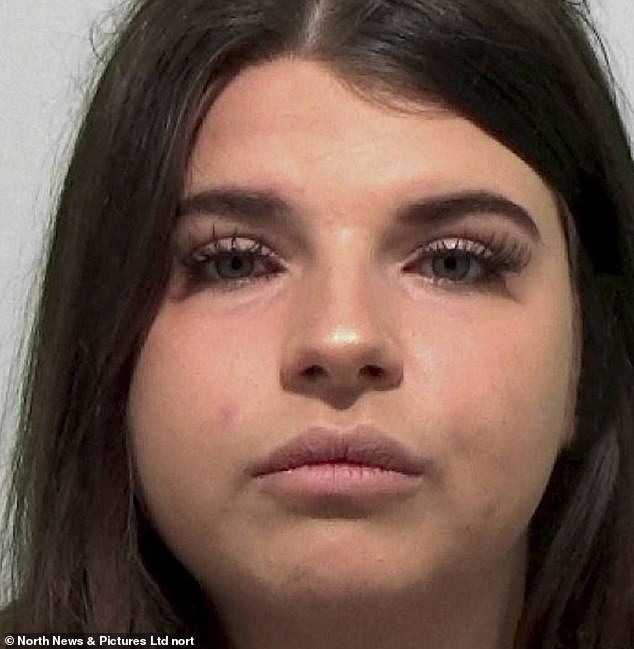 Rebecca Porteous, 22, of Whickham Road, Hebburn was sentenced to eight months imprisonment, suspended for 18 months, with 80 hours unpaid work, after admitting being the owner of a dangerous dog that has caused injury

She said in a statement: ‘I have flashbacks and should I see a dog come towards me I freeze and raise my arms.

‘Previously I had no issue with dogs but now even when they’re on a lead I become apprehensive.’

The judge said he accepted Hugo had not been deemed to pose an immediate danger and being of calm temperament but told her: ‘I have to query whether it is right for any responsible parent, ever, to keep such a breed when they have young children about.

‘I acknowledge Hugo’s temperament here but in 30 years of working in these courts I have repeatedly heard owners of such breeds saying they are so good and they are no problem around young children or my family.

‘But, when there is a problem, they are of such build, strength and force of bite that when they do react violently, when they do demonstrate aggression, there is almost always serious consequences and sometimes a fatality.’

Judge Gittins said ‘a combination of unfortunate events’ led to the injuries being caused and accepted Porteous had tried to intervene as quickly as she could.

Fiona Lamb, defending, said Porteous has had a lot to deal with for someone of such a young age and had been with her partner for seven years before his death, which left her a single parent to their young child.

Miss Lamb added: ‘She had no concerns about that dog at all. She said he was a loving family pet.

‘There was no concerns with him being around her daughter. He was also around other children and was absolutely fine.

‘This case has had a profound effect on her.’

The court heard Porteous has also been left with scars and feels upset about the injuries the dog caused to others.

A Northumbria Police spokesperson said: ‘The dog was seized because it had characteristics similar to that of a Pit Bull Terrier which is a banned breed under the Dangerous Dogs Act 1991.

‘The animal was housed in kennels and assessed by a dog expert. It was acknowledged that it was a cross-breed and had shown no previous signs of aggression, so was therefore returned to the owner on an interim basis.’