Cannabis infused sweets have become the latest craze among teenagers with authorities warning parents that they pose a serious danger because of their strength and if consumed to excess. 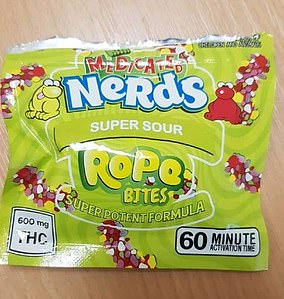 Known as ‘edibles’ they are freely available on the internet for around £20 for a packet of 30.

But street dealers are selling individual sweets for as little as £1 each, prompting a surge in popularity amongst school pupils, particularly in London and other urban areas.

The ‘edibles’ are attractively packaged in a way designed to appeal to young people while making it difficult to distinguish them from regular sweets.

One London schoolgirl told MailOnline: ‘All the kids are taking them, during school time and outside of it. They’re easy to get hold of and they’re very cheap, especially if you get them off the dealers. If you buy them on the internet, they’re delivered to your house.’

The ‘sweets’ come in a variety of different strengths of THC – the active component in cannabis, ranging from 75mg to a mind-bending 300mg, which can cause vomiting and other side effects.

Concerns have been raised however, that not all the packaging contains adequate information as to their strength and simply state ‘infused with cannabis.’

Some of the ‘sweets’ market themselves as a health treatment with one British website claiming: ‘Eating marijuana works better for LONG LASTING pain relief muscle spasms and similar conditions.’

Amongst the ‘edibles’ it lists are: Gummie Bears; Cherry Candy; Watermelon Rings and Peach Rings. THC laced fruit syrup is also available. All of it comes in stylised, colourful packaging.

While it is illegal to sell items containing THC in the UK for recreational purposes, it is legal for medical reasons, providing a dangerous loophole which many youngsters and dealers are exploiting.

They warned that the cartoon-covered Stoner Patch packets did not contain details about how strong the ‘sweets’ are and whether or not they are legal.

North Yorkshire PC Lauren Green said: ‘We want to make parents and carers aware that we have seen a rise in young people being in possession of drug-infused sweets known as ‘edibles’.

‘They can look very similar to well-known sweets such as Haribo, Smarties and chocolate bars. Edibles can be laced with illegal drugs such as cannabis and MDMA.

‘Unregulated sweets like these are dangerous as we don’t know what levels of drugs they contain.’