By Harry Howard For Mailonline

A man and woman who allegedly abducted a neighbour’s eight-year-old daughter have been charged with a child abduction offence.

Avon and Somerset Police said Ismail Qurba, 25, and Annmarie Lawton, 29, both of Bristol, have been charged with detaining a child so as to keep her from a person having lawful control of her, which is an offence under the Child Abduction Act of 1984.

The pair will appear at Bristol Magistrates’ Court virtual hearing on Saturday, the force said.

Police said the girl was ‘safe and well’ and in the care of specialist officers following the incident in Bristol. 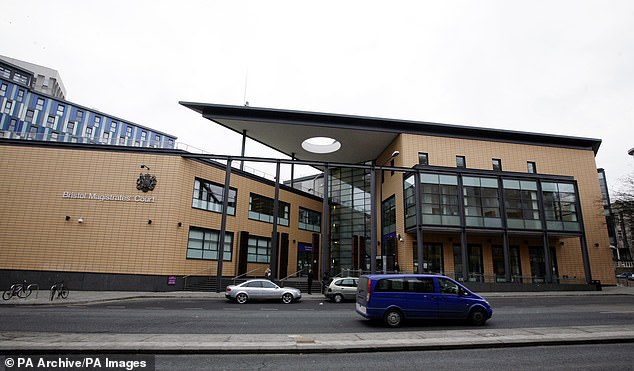 Ismail Qurba, 25, and Annmarie Lawton, 29, who allegedly abducted a neighbour’s eight-year-old daughter have been charged with a child abduction offence. The pair will appear at Bristol Magistrates’ Court (pictured) virtual hearing on Saturday, Avon and Somerset police said

The girl is thought to have vanished with Lawton and a man called Adam after the pair allegedly offered to take her to McDonald’s on Wednesday, sparking a 16-hour manhunt.

They were said to have later been seen on CCTV eating their fast food in front of a shop.

An urgent appeal was launched to find the girl after her mother had alerted police on Wednesday night when she had not returned home.

A force statement said: ‘Officers are grateful to the public and the media for sharing their earlier appeal to help trace the child.

‘We continue to ask for your help and support in considering the welfare of the child involved and in view of the active legal proceedings.

‘We therefore ask everyone to avoid intruding on the families of those involved and any speculation on the case in social media.’

A passer-by took photos which showed Lawton and her friend being stopped by police in a Bristol shopping centre shortly before 9am.

Adam was escorted away before Lawton was put into the back of a police car.

The pair were also seen carrying a Sainsbury’s bag which had what appeared to be toys and a pink umbrella inside.

It is believed the police were called by a member of the public after the trio were seen shopping.

Before Lawton and Adam offered to take the girl to McDonald’s videos of the child which were apparently filmed in Lawton’s property were posted on Facebook live.

A man could be seen in the background sitting on a sofa as Lawton talked about baking a cake.

Neighbours said Lawton had been placed in her home by the council earlier this year.

One said: ‘She lives here on her own, but people come and go all the time.’