A ‘womanising’ officer sobbed in a police interview and admitted ‘it’s clearly my fault’ his lover died in his car, but claimed she broke the ‘unwritten rule’ of an affair by demanding to know about his home life, a murder trial heard today.

PC Timothy Brehmer, 41, told officers it had ‘all gone so wrong’ in the interview the day after Claire Parry’s and repeatedly said ‘all I wanted to do was kill myself’.

The police officer also expressed his guilt over how his wife was ‘going to be so hurt’ and revealed how he and Mrs Parry sent secret messages using an app called Telegram.

In the police interview, Brehmer said: ‘I’ve got nothing to hide at all. I’ve never intended in any way shape or form to hurt her, not one bit. The only person I should have hurt yesterday was myself.’

He added: ‘She was just so angry and I don’t like saying this because I don’t like speaking ill of the dead. I can’t believe she’s dead, I genuinely can’t.’

The court has heard that Brehmer ‘angrily and deliberately’ strangled mother-of-two Mrs Parry in his Citroen on May 9 of this year after she threatened to reveal their 10-year affair to his detective wife.

Recalling the events of the day she died, he said: ‘I made an excuse to get out of the house, I didn’t want to meet her but she was so angry that I had to.

‘I was in a state of panic really and had already been trying to buy some rope to tie it round a tree… all I wanted to do was kill myself.

‘My penknife was in the car, I take it everywhere. Because I could not pick up the rope I wasn’t sure how I was going to kill myself but I was going to get some wire from a fence or drive into a tree.

‘Never for one second did I ever intend to hurt her, we’d been seeing each other on and off for 11 years, I can’t say that I loved her but I definitely cared for her.

‘Things had changed recently, it had all gone so wrong.’

Salisbury Crown Court also heard today how Brehmer left his nurse lover with ‘unsurvivable’ brain damage after he strangled her with ‘significant force’ and fractured three parts of her neck. 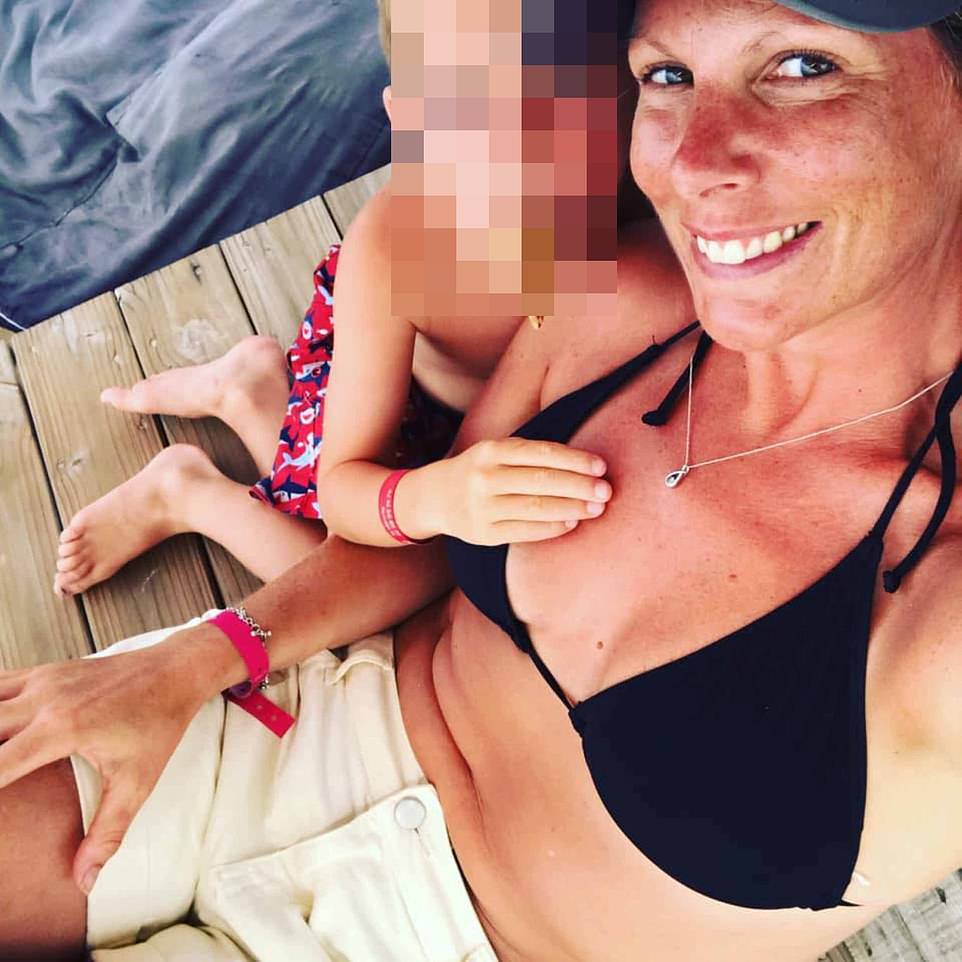 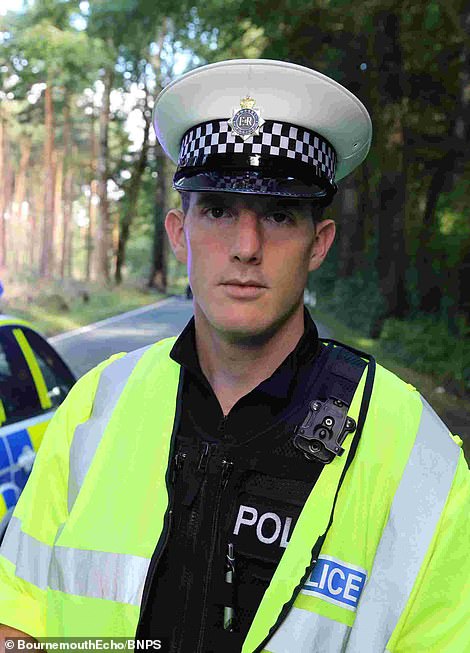 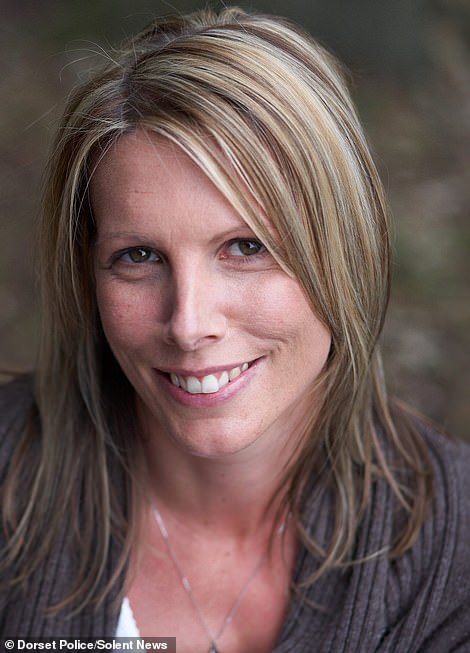 Dr Amanda Jeffery revealed to jurors the catalogue of injuries Mrs Parry suffered during what she called a ‘sustained’ compression on her neck.

The Home Office-registered pathologist said the 41-year-old nurse suffered ‘severe’ and ‘prominent’ neck injuries, including fractures to a bone and two cartilages.

Based on scientific reports, Mrs Parry may have been strangled for 10 to 30 seconds for facial haemorrhaging to appear, Dr Jeffery suggested.

Mrs Parry, who was throttled in a pub car park in West Parley, Dorset, died from what is known as a hypoxic-ischemic brain injury — the deprivation of blood to the brain.

The court also heard today that Brehmer’s mobile phone was wiped around the time he allegedly murdered his nurse lover.

Dorset Police mobile device examiner Sophie Millington said Brehmer’s iPhone was given a factory reset at 3.05pm, meaning experts cannot obtain any information from it. It has been alleged that he murdered his mistress at around 3pm.

Brehmer said Mrs Parry demanded he hand over his phone to look through social media and messages to his wife so she could learn about ‘his perfect life’.

He added: ‘It was always the unwritten rule of the affair that you don’t ask about the other people but all of a sudden she wanted to know all about my life.

‘She got hold of my phone and looked through my messages, she wanted to see if I was talking to anyone.

‘The app we had been messaging on was Telegram, it had to be something that was not normal and not used by everyone else.’

Brehmer said she was ‘nasty and vindictive’ and would ‘sneer’ at photographs on his phone. ‘I was feeling helpless at that point, I just wanted her to go so I could go and kill myself, it was all I wanted to do’, he added.

‘I got my knife, I wanted to show her how desperate I was… the blood came pouring out and she didn’t even bat an eyelid. I just wanted to drive a car into a tree as fast as I possibly could.’

After she sent a ‘I’m cheating on you’ text to his wife, Brehmer said he walked around to her side of the car to get her out.

He said: ‘I tried to pull her out but she’s quite strong, she leaned back in the car, lying across the gearstick. I pulled her legs but didn’t have the strength to pull her out.

‘I piled into the passenger side to try to move her and push her, she turned away on her tummy.

‘I managed to move her, I was lying across on her… I was trying so hard to pull her out the car. 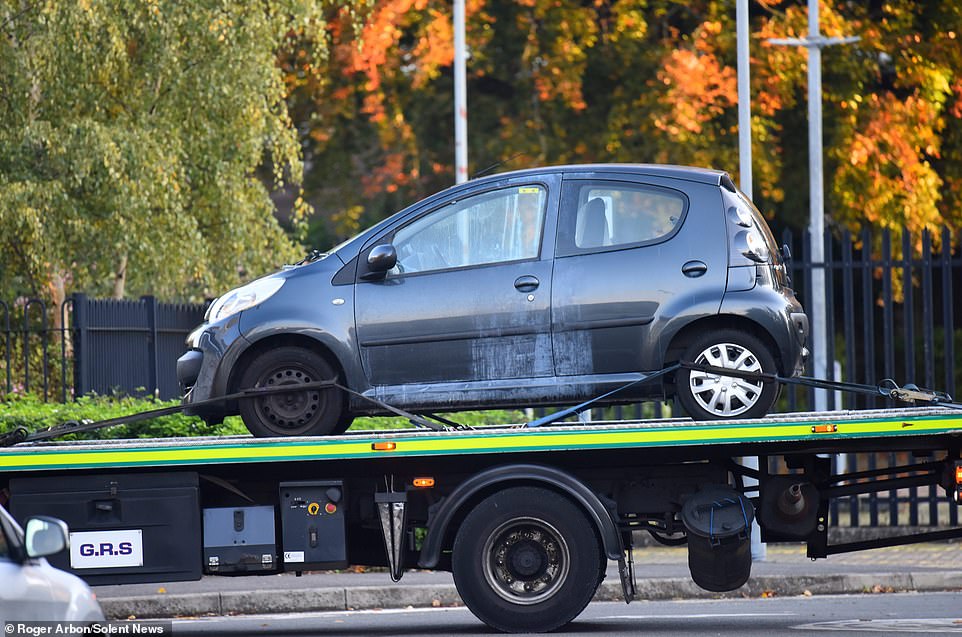 The court has heard Brehmer, 41, ‘angrily and deliberately’ strangled mother-of-two Mrs Parry in his Citroen after she threatened to reveal their 10-year affair to his detective wife 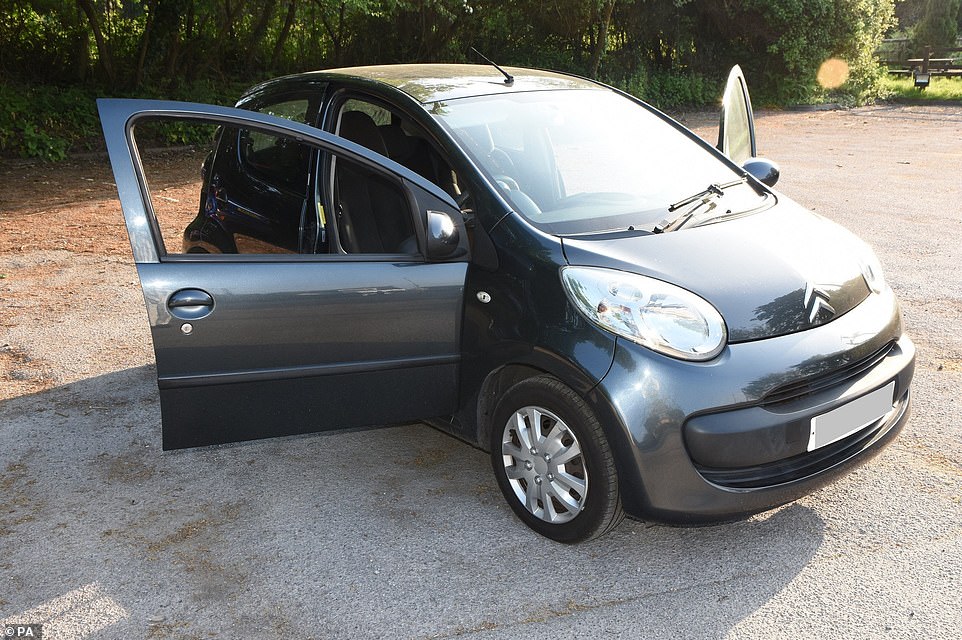 The court has heard Brehmer, 41, ‘angrily and deliberately’ strangled mother-of-two Mrs Parry in his Citroen after she threatened to reveal their 10-year affair to his detective wife

‘I don’t know how long that went on for, she was trying to stay in the car.

‘I managed to roll out of the door… I didn’t look at her but she was not moving. I didn’t really notice her at the time, I didn’t see anything, I didn’t mean to hurt her but I obviously have.

‘I was bleeding so much, I was scared and it was like self-preservation, so I ran to the road and there were people on bikes, I was just saying ‘please help me, please help me’.’

At Salisbury Crown Court, Dr Jeffery said: ‘There had been death as a result of hypoxic-ischemic brain injury that was consequent on her neck being compressed.

‘Mrs Parry was found slumped out of the door.. she was unresponsive and in cardiac arrest. After several attempts at resuscitation her heart was restarted but she had unsurvivable hypoxic-ischemic injuries to the brain.

‘This is damage caused by the reduction of the supply of blood to the brain.’

After listing a number of other injuries Mrs Parry sustained, Dr Jeffery said: ‘The most prominent (injuries) were around the neck.

‘In summary, the most significant finding was the severe neck injuries caused by bruising and fractures.’

She added: ‘I choose (the term ‘severe’) carefully, as on a scale of mild, moderate to severe, I would consider they were severe injuries. The findings were indicative of significant force to the neck.’

The pathologist also demonstrated to jurors how Mrs Parry might have been strangled in the crook of a forearm, and explained this leads to bruising around the jaw — as found in Mrs Parry’s body.

‘If an assailant’s arm is against the neck and the person is struggling, to get away the person’s jaw could be brought down to help wriggle free,’ Dr Jeffery said.

She could not say for certain how long Mrs Parry was strangled for, but said scientific reports suggest it takes 10 to 30 seconds of compression for small facial haemorrhaging to appear, as was found in her body.

Dr Jeffery insisted time estimation is ‘a controversial area’ but added: ‘It’s clear that sufficient force has been applied for a sufficiently sustained duration to result in these injuries.’

It was heard Mrs Parry was 5ft 9ins and weighed 14 stone while Brehmer, of Dorset Police, is 6ft and weighed just under 14 stone.

Dr Jeffery said she couldn’t rule out manual strangulation but said she did not find bruises consistent with it.

Brehmer, described as a ‘man w***e’ by Mrs Parry in messages before her death, seduced other women in the emergency services including DC Kate Rhodes, also of Dorset Police.

He admits manslaughter but denies murder, claiming he was trying to get his lover out of the Citroen C1.

It was also revealed Dorset Police’s investigation was hindered because they couldn’t obtain much information from Mrs Parry’s phone, and software won’t be able to extract it for 19 years.

A four-digit password on her smart watch prevented them from discovering when her heart stopped beating. 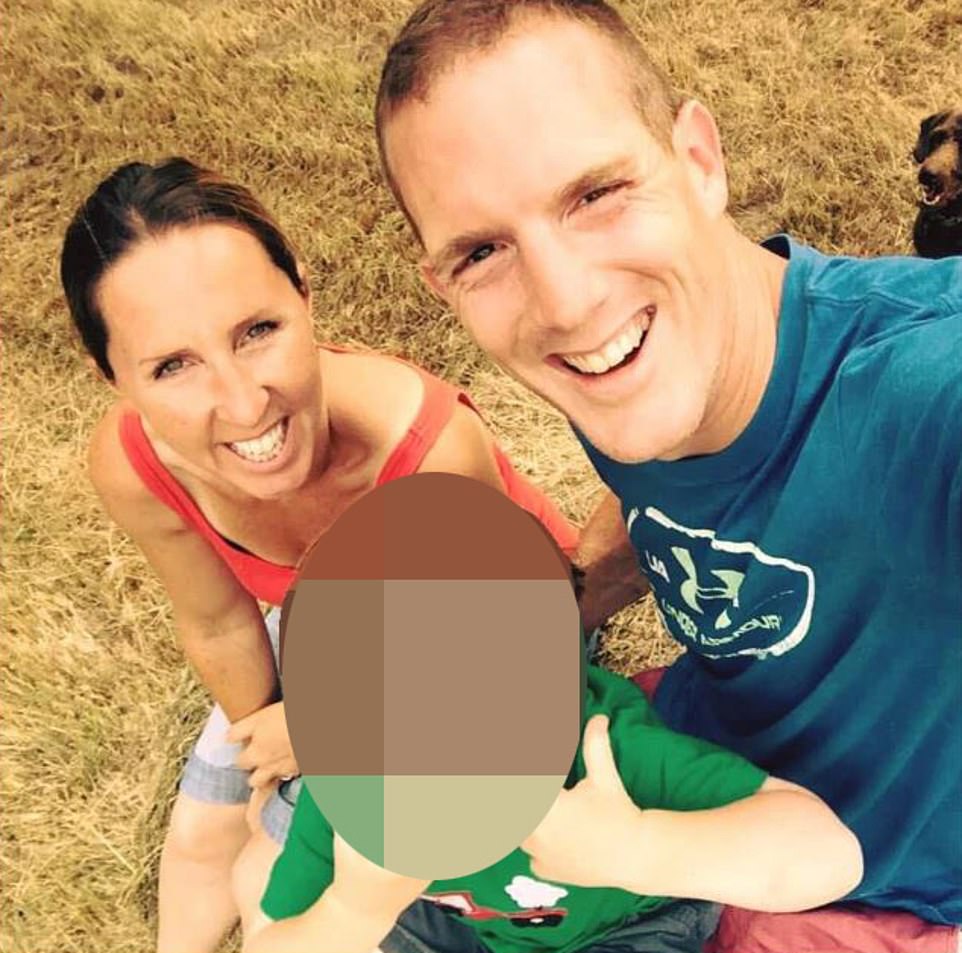 PC Timothy Brehmer (pictured with his wife) is accused of murdering nurse Claire Parry, a mother-of-two, in a grey Citroen C1 after she threatened to reveal their 10-year affair

Speaking about Brehmer’s phone, Miss Millington said: ‘When it came in I examined the sim card. I didn’t examine the handset… nothing valuable had been recovered.

‘When powered on it displayed the welcome screen. The device had been reset, no personal data was on there.’

Miss Millington attempted an iCloud extraction however she could not recover any messages, including any from WhatsApp and another application called Telegram.

She said her investigation showed the phone was wiped at 15.05 on May 9.

When Miss Millington examined Mrs Parry’s iPhone, she was only able to extract a limited amount of information because of its six-digit pin code.

Since August, an advanced technological machine has been trying to crack it, but won’t be able to until 2039.

She said: ‘I used a software… it tests different pin codes and can take days, months, or even years. The phone is in the lab and is still running the application, it’s been running since August. We have still not yet got the pin code, the software said it should take around 19 years.’

A partial extraction was completed from Mrs Parry’s iPhone, which showed notes on her phone including the draft message she prepared for Brehmer’s wife, DC Martha Brehmer, in which she described him as a ‘man-w***e’.

The police force was hindered by also not being able to obtain data from Mrs Parry’s Apple smartwatch. 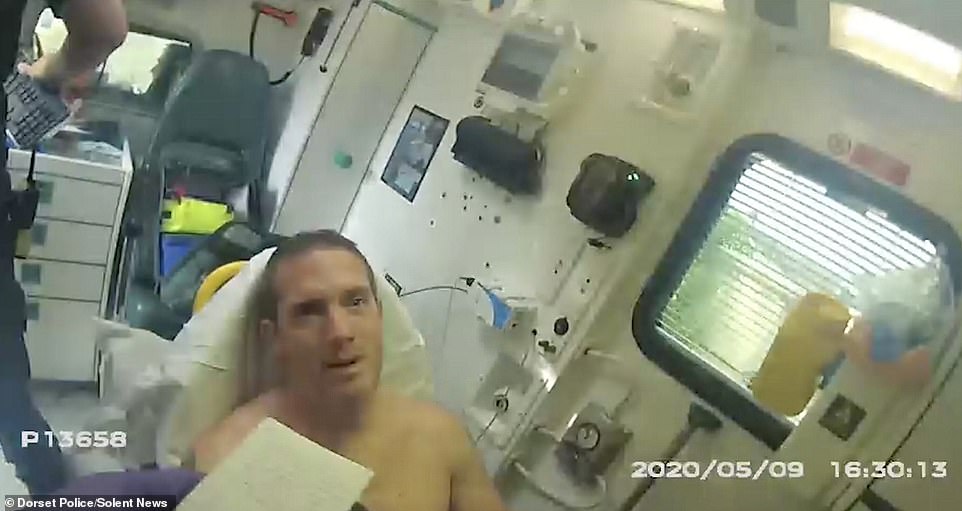 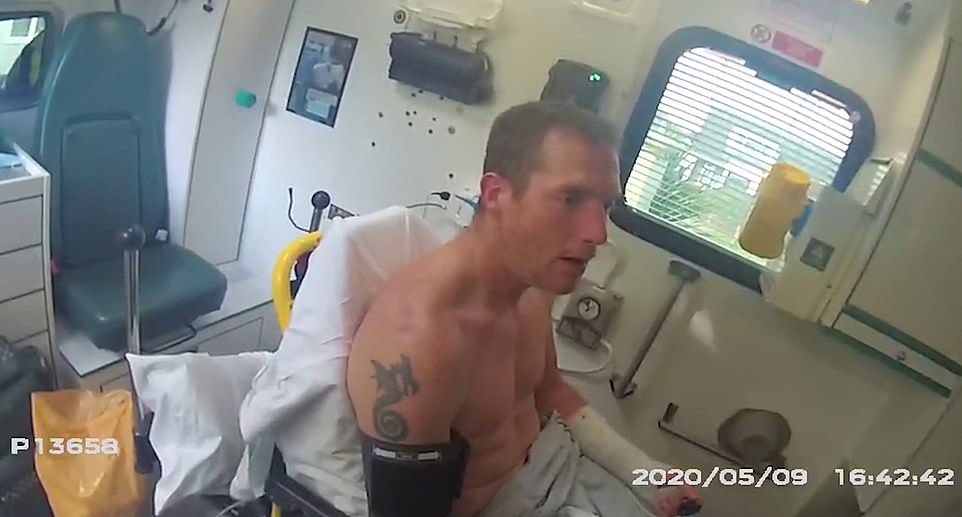 Miss Millington said: ‘Unfortunately we have also liaised with other police forces but we have no way of getting the pin.’

Brehmer’s iPad, which did not have a passcode, revealed messages from former lover DC Kate Rhodes from 2016.

Brehmer is a former traffic officer who was seconded to the National Police Air Service (NPAS) and lived with his wife, Dorset Police DC Martha Brehmer, and their nine year old son in Hordle, Hampshire.

Mrs Parry, who had an eight-year-old daughter and a six-year-old son with her husband, was a nurse practitioner at a medical centre in their home town of Bournemouth, Dorset.

It follows bodycam footage being shown to jurors this week showing the topless Dorset Police officer sat on the ground at a pub car park, sobbing and surrounded by emergency crews.

Video shows the inconsolable Brehmer being questioned in the back of an ambulance, having allegedly stabbed himself in the arm with a penknife.

The court was told how he insisted ‘I’m a good man’ and asked ‘what’s my mother going to say?’ in the aftermath of the tragedy.