This is the moment Manchester City striker Sergio Aguero grabs a female assistant referee around the back of the neck during a dispute over a throw-in.

The Argentinian forward is seen putting his left on on Sian Massey-Ellis during last night’s 1-0 win over Arsenal.

Today it has been revealed that the striker will not be punished for the incident, which has prompted anger from those in football, as well as sports writers and an MP.

He said: ‘Come on guys, Sergio is the nicest person I have met in my life. Look for problems in other situations, not in this one.’

Guardiola leapt to Aguero’s defence, claiming the Argentine is the ‘nicest person’ he’s ever met 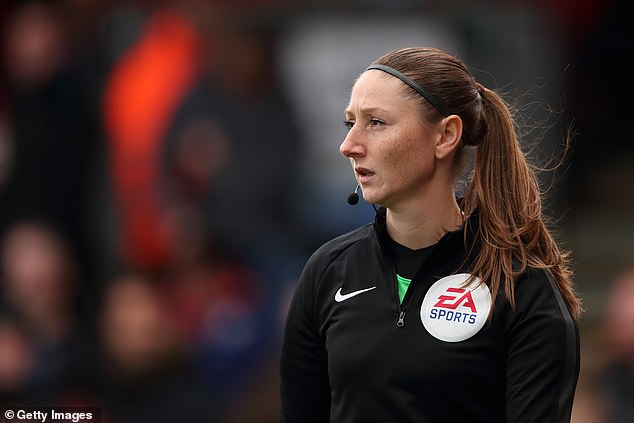 Sian Massey-Ellis was the assistant referee running the line in the game between Manchester City and Arsenal. Here she is pictured during a Premier League match between Bournemouth and Manchester United in 2019

Though Guardiola leapt to the defence of his player, Ian Wright, speaking on Match of the Day was less impressed, and branded Aguero’s actions ‘unnecessary’ and ‘patronising’.

Aguero was certainly taking a chance. Chris Foy, the former Premier League referee, said: ‘The key words are “aggressive” and “confrontational.” The laws state, “it’s not unusual for players to come into contact with officials.

‘As long as this is done courteously and not in an aggressive or confrontational manner there is no requirement for a referee to take action”.’

Others on Twitter also reacted, included Good Morning Britain presenter and Arsenal fan Piers Morgan, who said: ‘Erm, what is Aguero doing here? And why wasn’t he sent off for it?’ 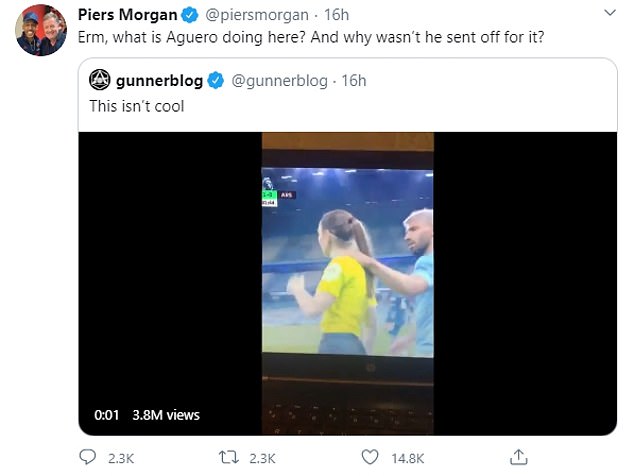 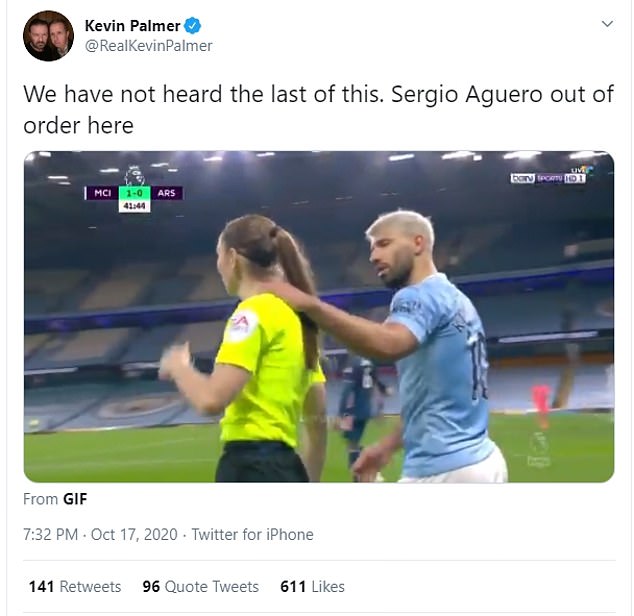 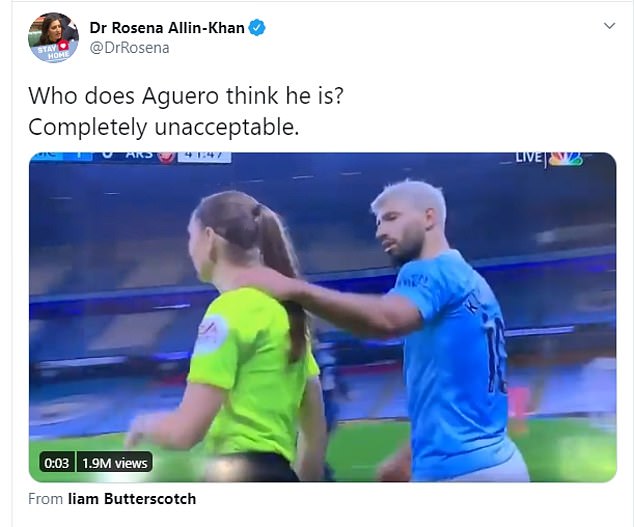 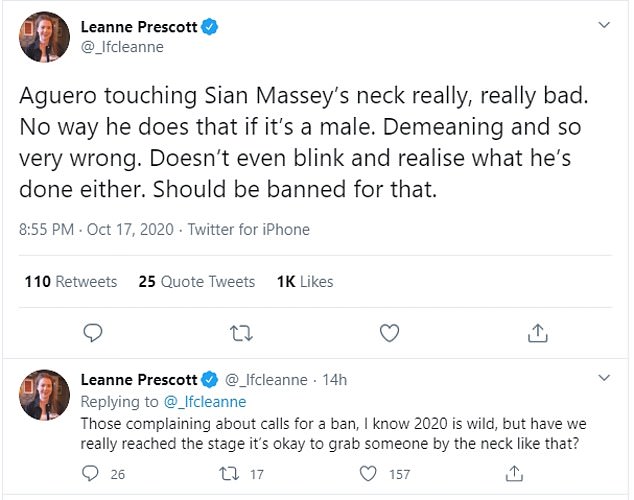 Sports and entertainment writer Kevin Palmer also tweeted about the incident, saying: ‘We have not heard the last of this. Sergio Aguero out of order here.’

Others to tweet about it included Labour MP for Tooting, Dr Rosena Allin-Khan, who described his actions as ‘completely unacceptable’, while British singer Anne Marie added: ‘Sorry but not sorry why is Sergio Aguero touching the lines woman like that! Ergh disgusting.’

The incident was also a talking point after the game on Sky Sports.

He said: ‘He didn’t need to do it really. You have to respect the officials. I think she deals with the situation really well.

‘He’ll know better. I don’t think we need to go over the top on it but he shouldn’t be touching the officials, it doesn’t look good.’ 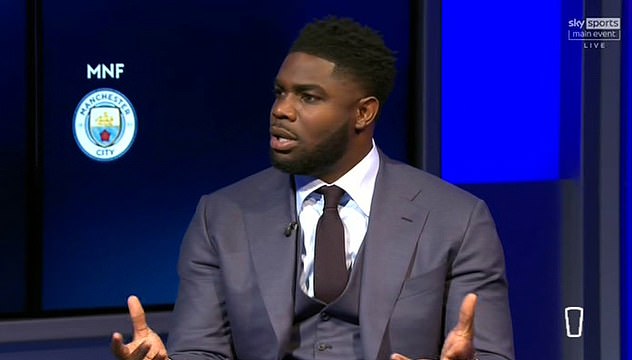 Massey-Ellis was the subject of sexist jibes which cost presenters Andy Gray and Richard Keys their jobs at Sky Sports in 2011.

Keys and Gray left their roles with Sky after derogatory off-air comments about the female official’s ability to run the line, and the ability of women to officiate football matches in general, were picked up in January 2011 when they thought their microphones were off.

‘Somebody better get down there and explain offside to her,’ Keys said prior to the Premier League match between Wolves and Liverpool.

Gray replied: ‘Can you believe that? A female linesman. That’s exactly why I was saying; women don’t know the offside rule.’

Keys then added: ‘Of course they don’t……urrghhh. The game’s gone mad.’

Massey-Ellis later spoke in depth about the incident during an interview with the Times, where she says she told Keys ‘he should have known better’ when the presenter called to apologise. 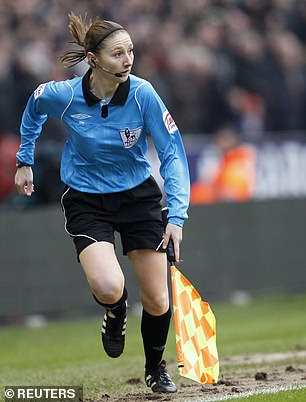 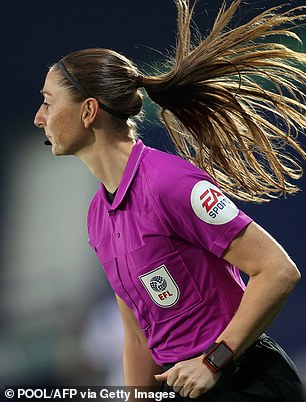 Massey-Ellis was the subject of sexist jibes which cost presenters Andy Gray and Richard Keys their jobs at Sky Sports in 2011. She was awarded an MBE in the 2017 New Year Honours for her services to football

‘When Richard rang to apologise on behalf of both of them, and he said, “I’m sorry”, I just said, “For me, I thought you would know better”, Massey-Ellis told The Times.

‘In their position, they should have known that just to be on that pitch I must have gone through so much. So much scrutiny, so much training, so many challenges, so much game pressure. I’m not there without being tried and tested over many years.

‘I wasn’t really angry. I am not really an angry person. I was just disappointed in their attitude.’

However, Keys tweeted in response to the article to insist the assistant referee dismissed the incident as ‘only banter’ during their conversation before claiming she also thanked him for ‘not showing the one I cocked up really badly’.

Massey-Ellis was awarded an MBE in the 2017 New Year Honours for her services to football.