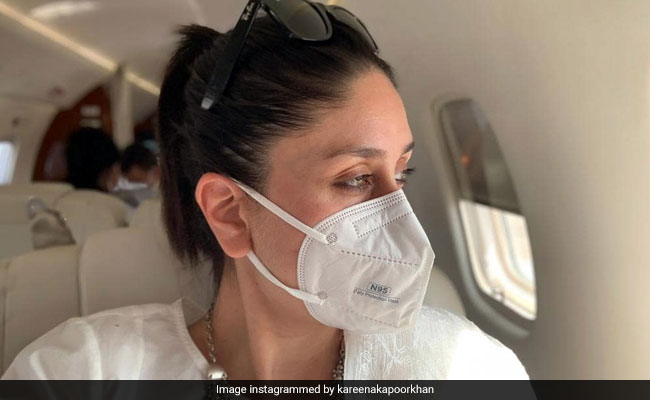 Kareena Kapoor is taking the Internet by storm, one post at a time. The actress, who was photographed at Mumbai’s airport on Wednesday, posted a picture of himself from the flight and her caption is winning the Internet. In the photo, Kareena Kapoor, 40, can be seen sporting a face mask and looking outside a window in plane. She looks beautiful in a white outfit, which she paired with a neckpiece and sunglasses. Sharing the photo, Kareena Kapoor wrote: “Mask peheniye aur bahar dekhiye.” Reacting to her post, Punit Malhotra, who directed Kareena in Gori Tere Pyaar Mein, commented: “Breaking the net, ma’am.” Take a look at Kareena Kapoor’s post here:

Earlier in the day, Kareena Kapoor shared a no make-up photo of herself. It has been trending on social media since then. In case you haven’t seen the picture yet, take a look:

Kareena Kapoor recently wrapped the shoot of Laal Singh Chaddha. She even shared a fun-filled boomerang from the set and wrote: “Now you see me… Now you don’t.”

Kareena Kapoor is married to actor Saif Ali Khan. The couple, already parents to a son named Taimur, are expecting their second child.

The actress will next be seen in Karan Johar’s period drama Takht and Laal Singh Chaddha, in which she will share screen space with Aamir Khan. Both Laal Singh Chaddha and Takht are slated to release on Christmas next year.