By Elliott Mulligan For The Daily Mail

Veteran activist Swampy is among a group risking their lives by burrowing into the ground in a bid to thwart their eviction from a makeshift protest camp.

The HS2 Rebellion squad set up the ‘Tree Protection Camp’ in Euston Square Gardens in September to protest against the multibillion-pound rail project.

Members say the tunnel, codenamed Kelvin, is 100ft long and has taken two months to dig.

Video footage from inside, filmed by activists, shows a cramped, winding passage with wooden props against its walls. In some parts they can be seen removing loose earth with just a trowel. 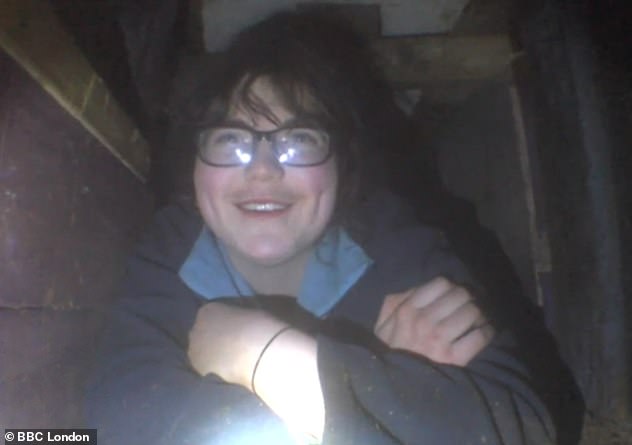 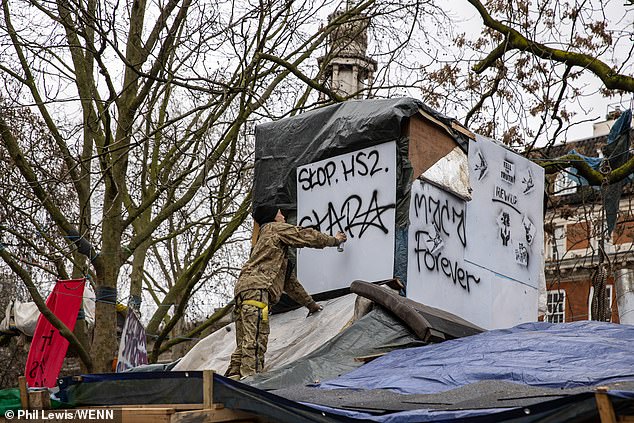 The HS2 Rebellion squad set up the ‘Tree Protection Camp’ in Euston Square Gardens in September to protest against the multibillion-pound rail project.

A spokesman for the group said Swampy, real name Daniel Hooper, had been an ‘invaluable source of expertise’ in helping to dig the tunnel. The group said last night that it expects to face eviction ‘imminently’.

It said tunnellers ‘worked around the clock, using pickaxes, shovels, buckets and shifts of two to 12 people at a time’. The entrance is concealed by a ‘fortified stronghold’, complete with a tower built from pallets, which activists have nicknamed Buckingham Pallets.

Activists are living in a main chamber of the tunnel, with stashes of tinned food and vegetables stored along its length.

One 18-year-old protester, identified only as Blue, told the BBC the tunnel was ‘very dangerous and life threatening’ but it was their ‘best defence’ against being evicted.

Blue said: ‘It is not about us martyring ourselves, it is about delaying and stopping HS2. This is the only way I can effect change, I would sacrifice everything for the climate ecological emergency to not be happening.’

Swampy, who has been involved in several anti-HS2 protests, became a household name in 1996 after digging a series of tunnels in a failed attempt to prevent the building of the Newbury bypass in Berkshire. 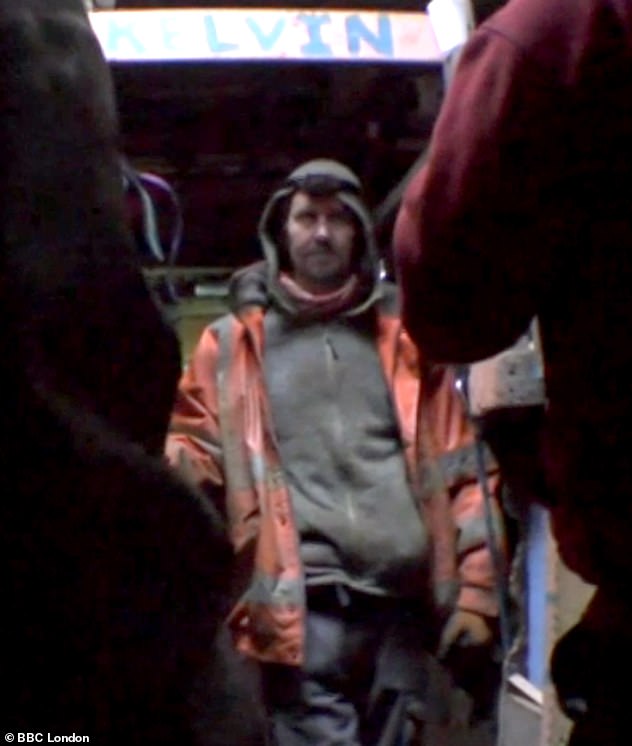 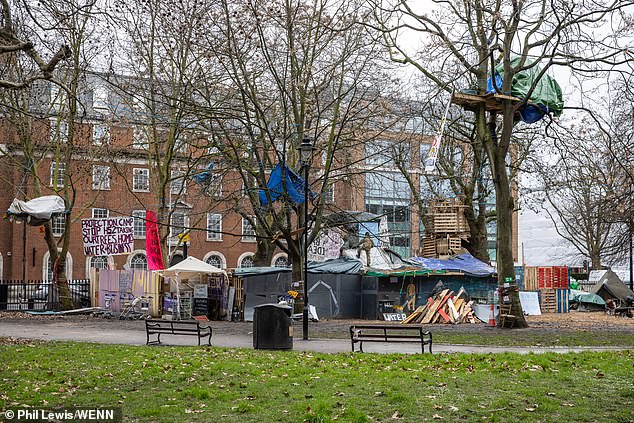 The group claim the tunnel, codenamed ‘Kelvin’, is 100ft long and has taken two months to dig

More recently tunnels were used by environmental campaigners in 2017 to prevent fracking in Coldharbour, Surrey.

In an online environmental protest guide, written by ‘Disco Dave’, tunnelling is described as ‘the ultimate and desperate tactic of desperate people in desperate times’.

The £170billion HS2 rail project is set to link London, Birmingham, Manchester and Leeds. It is hoped it will reduce rail passenger overcrowding and rebalance the UK’s economy.

An HS2 spokesman said: ‘Protests such as these are costly to the taxpayer and a danger to the safety of the protesters, HS2 staff, High Court enforcement officers and the general public, as well as putting unnecessary strain on the emergency services during the pandemic.’

HS2 Rebellion claims it is the ‘most expensive, wasteful and destructive project in UK history’ and is set to destroy or irreparably damage 108 ancient woodlands and 693 wildlife sites. HS2 bosses say most ancient woodland will ‘remain intact’.

The first phase of the rail link between London and Birmingham will not open until 2028. The second, to Manchester and Leeds, has been delayed until 2035-40.