Householder, 65, is fighting for his life after being stabbed by intruder breaking into his home as police arrest 55-year-old suspect

A pensioner has been left fighting for his life after he was ‘stabbed by an intruder who broke in to his home’ in Nottinghamshire.

Police said the victim, 65, suffered puncture wounds to his abdomen and chest following the alleged attack in Halam, near Southwell, at around 4.15am today.

It is understood the resident had gone to investigate the sound of breaking glass before being stabbed by the suspect, who then fled the scene.

The victim suffered serious injuries and was rushed to the Queen’s Medical Centre in Nottingham for surgery, where he tonight remains in a serious condition.

A 55-year-old man has been arrested in connection with the incident. 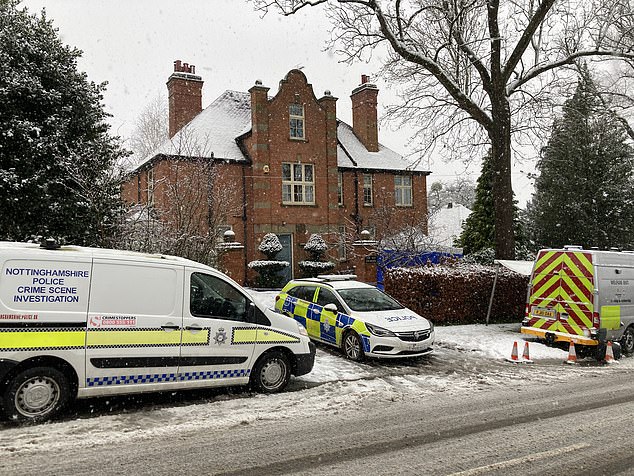 Police said the victim, 65, suffered puncture wounds to his abdomen and chest following the alleged attack in Halam, near Southwell, at around 4.15am today. Pictured: Police at the scene

Police are currently searching a property in Southwell following the incident, with forensics officers understood to be in attendance.

Detective Inspector Gayle Hart, who is leading the investigation, said: ‘Our investigations into this case have led us to arrest this man who we will be interviewing in due course in connection with this case.

‘The swift arrest of this suspect we hope will provide some reassurance to local residents.

‘As I said earlier this is a horrific incident which has left a man fighting for his life and his family who were upstairs at the time are extremely shocked and upset by the ordeal.

‘The victim is in the intensive care unit and is currently in a serious but stable condition. 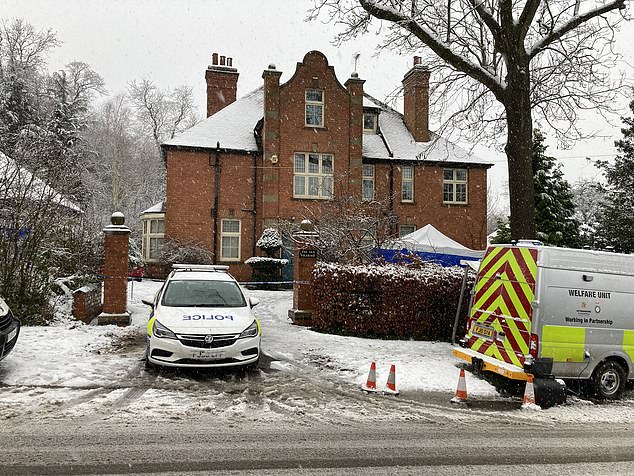 It is understood the resident had gone to investigate the sound of breaking glass before being stabbed by the suspect, who then fled the scene. Pictured: Police at the scene

‘We’re continuing to make enquiries and are not ruling anything out so we would welcome speaking to anyone who may have information which would help with our enquiries, or who may have been a witness.’

One local man, who did not wish to be named, said the first he knew of the incident was the appearance of police cars outside the victim’s home.

He added: ‘The first I knew something was wrong was when I saw police vehicles outside the house with police and forensic people coming and going from inside.

‘I don’t know who lives at the house but you have to feel sorry for the injured man and his family.

‘We are a small and close community and there are going to be a lot of people upset by this.

‘There is next to no crime here so what has happened is shocking.’