By Luke May For Mailonline

Half a million fish were pictured washing up on a British beach in a desperate bid to escape hungry seals and dolphins at the weekend.

Calm seas off the coast of North Wales on Saturday brought an influx of predators to the seaside, leaving smaller fish desperately fleeing for their lives.

Aeron Griffith was on Benar Beach, near Barmouth, when he saw thousands of sprats, part of the herring family and similar to sardines, lining the beach after they had stranded themselves on the sand. 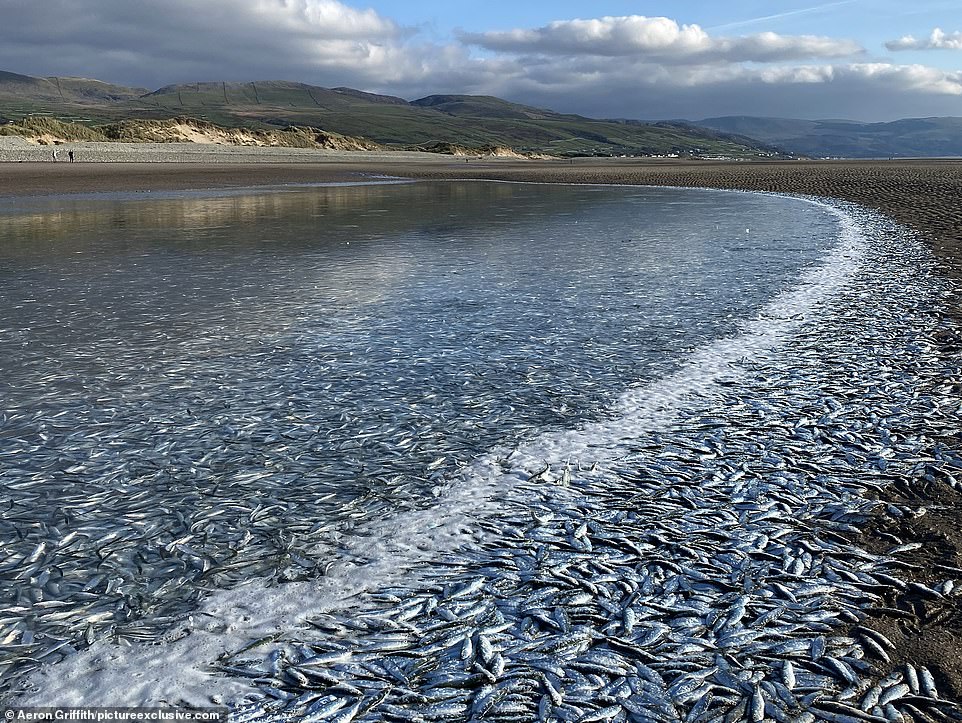 Half a million sprats lined Benar Beach in Barmouth, North Wales, on Saturday, after they were left stranded in shallow waters when they tried to escape hungry predators

He told the BBC: ‘I was going there to get some bait, but ended up taking a few of them. They attract predatory fish – bass, mackerel and sometimes dolphins and porpoises.’

Robert Redman, of Welsh Wild Waters, said: ‘When the tide comes in there are pockets in the sand and the sprats get stranded in them. It’s not a massively rare thing.

‘What happens is the mackerel push the sprat far into the coast – they feed on the sprat. Once they get so far in and the tide comes in, the sprat get stranded.’

Flocks of squawking, delighted seagulls were circling overhead, eager to swoop down and grab a beak-full of fish.

Despite being a bizarre site, it is not an uncommon occurrence to see sprat beaching themselves to evade predators.

Experts believe the bizarre sight occurs when the small fish beach themselves in an attempt to evade predators. 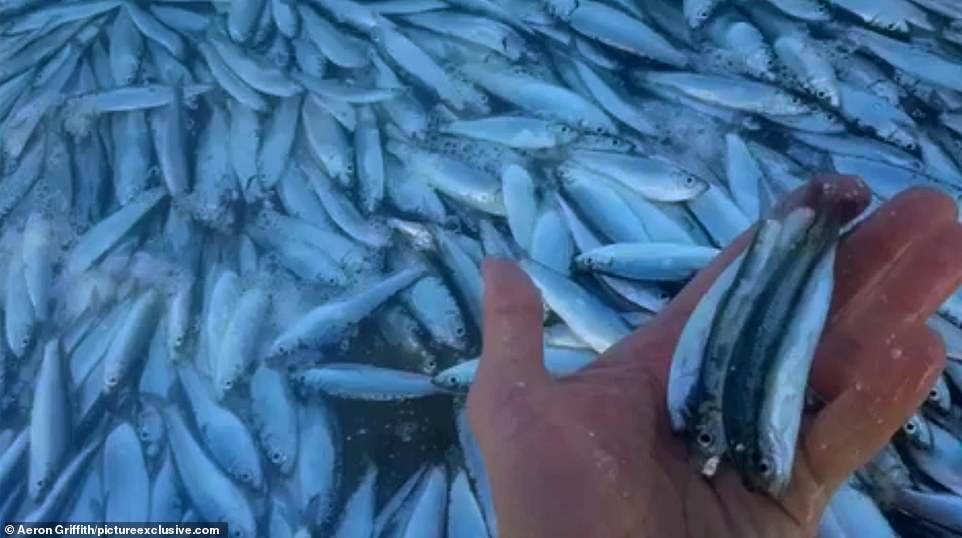 Experts say ‘bait balls,’ of fish can end up beaching themselves as they swim to shallow waters to escape predators, only to be left stranded when the tide goes out

While the sprats manage to escape the hungry mouths of dolphins and seals, they become disorientated as they attempt to escape which means they run into shallow waters which they would ordinarily try to avoid.

Why do sprats and small fish willingly beach themselves?

While a bizarre sight, ‘bait balls,’ of fish beaching themselves is not uncommon.

Large groups of fish, often spherical in formation, hence the name ‘bait ball,’ willingly swim into shallow waters in a bid to escape predators, such as dolphins and seals.

Once they reach safer waters, they are usually disoriented, and unable to leave to return to their natural habitat.

As the tide goes out, they are left beached on the sand and unable to escape.

Once left out on the open, they are usually picked off by aerial predators, such as the seagull.

This leaves them stranded once the tide goes out.

In 2017 Cornish holidaymakers saw their local beach’s golden sands turn silver overnight as a quarter of a million fish jumped to their deaths to escape being eaten.

The amazing scenes left a 200-yard (183 metres/ 600 feet) stretch of Crinnis beach in Carlyon Bay turned to white and silver by the dead and dying stranded little fish.

A year before, thousands of dead mackerel and herring washed up on Pentewan beach.

In 2014, hundreds of tiny, dead whitebait were also found washed up at nearby Mullion Harbour on the Lizard in southern Cornwall.

Natural Resources Wales said people should not be worried about the spectacle.

‘Our officers received a report of what we believe to be a shoal of sprats that have washed up on Benar Beach.

‘The calm seas this week means that larger predators, such as seals or mackerel can often end up chasing smaller fish all the way on to the sand.

‘The fish in these bait balls then ground themselves on beaches in an effort to escape.

‘Although it may appear worrying it is only nature at work.’

Despite being a bizarre site, it is not an uncommon occurrence to see sprat beacing themselves to evade predators.

In 2017 Cornish holidaymakers saw their local beach’s golden sands turn silver overnight as a quarter of a million fish jumped to their deaths to escape being eaten.

The amazing scenes left a 200-yard stretch of Crinnis beach in Carlyon Bay turned to white and silver by the dead and dying stranded little fish.