A father-of-two allegedly killed by his neighbour in an argument over bird feeding was a sport-lover who played against State of Origin legends in the 1970s.

Bradley ‘Wardy’ Ward, 60, was allegedly kicked and hit with a broomstick while he lay on the ground by his neighbour outside of his Whiting Street home in the Gold Coast suburb of Labrador about 5.15am on Wednesday.

Mr Ward was found collapsed when emergency services arrived but paramedics could not revive him and he died at the scene. 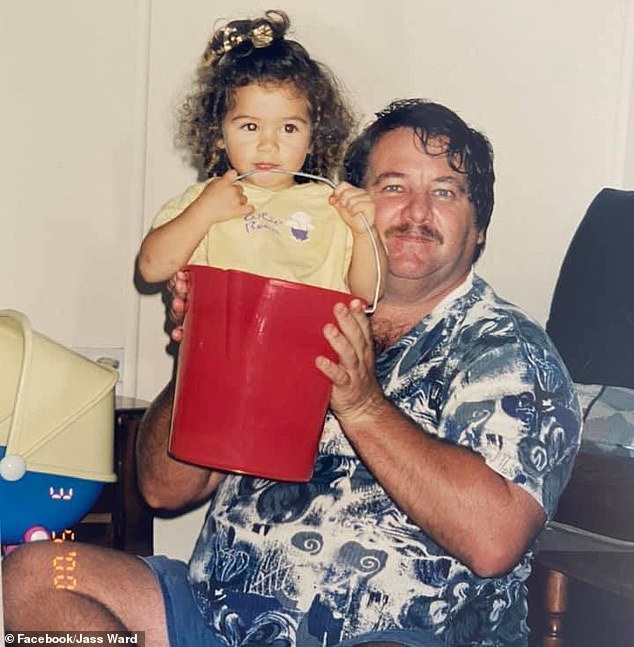 Gold Coast father Bradley ‘Wardy’ Ward (right), 60, and his niece Jass, who is now 22. Mr Ward was allegedly killed by his neighbour Trevor Dale Wheeler, 48, outside of their Whiting Street homes in the Gold Coast suburb of Labrador at about 5.15am on Wednesday

The father-of-two’s niece Jass Ward, 22, paid tribute to her uncle with a picture posted to Facebook on Thursday.

‘Yesterday we lost one of the greatest men I have ever known to a senseless violent act. Bradley Ward was so much more than just an uncle to me, he was like a second father,’ Ms Ward wrote.

‘He taught me so much within 22 years and never allowed gender stereotypes to stand in the way of teaching me how to fish, do things on the boat, pump yabbies, shoot, fight, play rugby, bowling, cricket and hockey, tie knots and box.

‘He was always the first one there if I ever needed anything regardless of what it was and treated me like the daughter he never had.

‘I’m still in shock trying to pull together the words to explain how unique he was and even try fathom the loss we’ve experienced.

‘I miss you and love you so much Brady and I know you’re up there with so many other mates and family just about to go for a fish now. Rest In Peace.’

Ms Ward also included a picture of herself as a child being held by Mr Ward when he was much younger.

He was an outdoors-loving man who liked fishing and played for the Southport Tigers rugby team as a teenager against Origin legends such as Paul ‘Fatty’ Vautin in the 1970s. 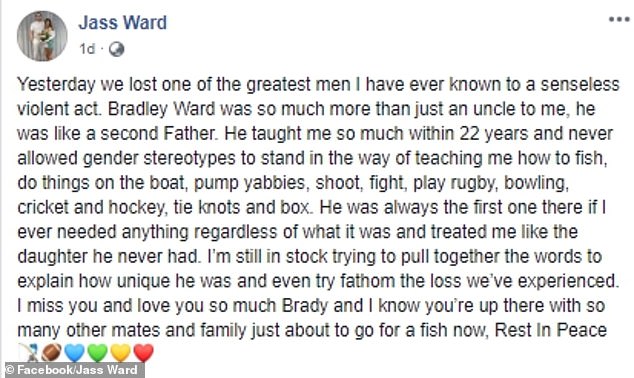 The father-of-two’s niece Jass Ward, 22, paid tribute to her uncle with a picture posted to Facebook on Thursday. She said Mr Ward was like a ‘second father’ to her who taught her skills like fishing, boating and shooting

Mr Ward’s life was cut short on Wednesday when he was allegedly killed by his neighbour Trevor Dale Wheeler, 48.

Wheeler is charged with manslaughter and serious assault of a person over 60 over Mr Ward’s death and was refused bail at Southport Magistrates Court on Thursday.

The court heard the neighbours allegedly argued outside of their Whiting Street home at 5.15am on Wednesday morning, according to the Gold Coast Bulletin.

‘Hey buddy, you want to stop feeding those birds,’ Mr Ward told Wheeler before the argument escalated into violence, the court heard.

A nearby taxi’s CCTV allegedly showed Wheeler kicking Mr Ward in the head multiple times while the 60-year-old father was on the ground.

Wheeler also allegedly hit Mr Ward in the head with a wooden broomstick he had brought out from his house in the security footage. 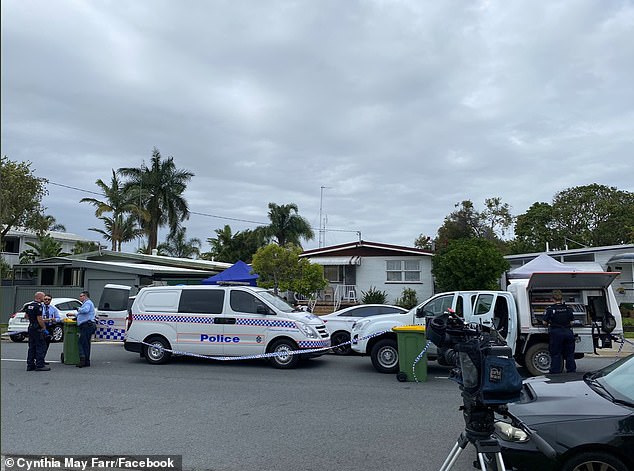 Police were called to Whiting Street, in Labrador on the Gold Coast about 5.40am on Wednesday morning after reports of an argument between two men

Mr Ward eventually stood up and waled a short distance before he collapsed and emergency services arrived, who pronounced him dead.

Wheeler’s lawyer Chris Hannay said his client lived on Whiting Street with his mother and brother’s family and fed birds every morning.

He said Wheeler and Mr Ward had never discussed the daily bird feeding prior to Wednesday morning.

Pictured: Investigators taking photographs of the scene where a 60-year-old man died following an altercation

‘There is no evidence whatsoever that my client wanted to get involved in an argument that was going to cause the death of somebody,’ Mr Hannay said, according to the Bulletin.

Mr Hannay said Wheeler asked for a ‘lethal injection’ and is not eating or drinking after discovering he killed Mr Ward.

He sought bail for his client, which was ultimately refused. Wheeler’s case has now been adjourned to December 15.