The founder of an artificial intelligence tutoring company has called on the Government to use his firm’s invention to boost the performance of underprivileged pupils.

Richard Marett, 48, co-founder and CEO of Whizz Education – which has remotely tutored more than a million children – says virtual maths teachers could be the key to bridging the education gap that opened up during the covid lockdown.

The Government has pledged £1billion to fund a ‘Covid catch-up plan’ that aims to target pupils who have been left behind during the pandemic with private tuition.

But Whizz Education, which focuses only on maths, can offer similar learning outcomes at a fraction of the cost, Mr Marett said.

‘A private tutor once a week for one child would cost the Government about £2,800,’ he said. ‘By comparison, our virtual tutors can do the job for £30.

‘Research has shown that virtual maths tuition is almost as effective as human tuition. Surely this is worth considering?’ 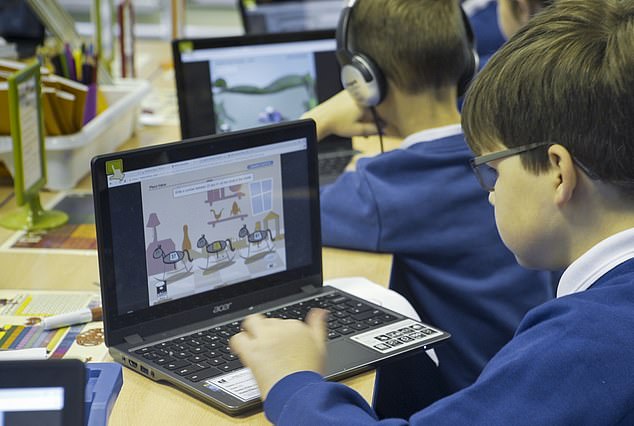 The robotic teacher, which is accessed via an online platform, simulates a private tutor 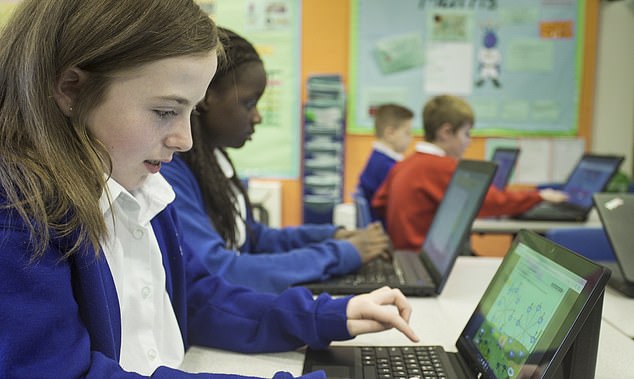 The programme, which offers gaming elements and regular rewards and motivations, picks up when a child is struggling 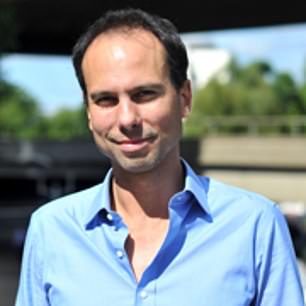 The robotic teacher, which is accessed via an online platform, simulates a private tutor. It works out a child’s weak points and strengths as it goes, and tailors exercises accordingly.

The programme, which offers gaming elements and regular rewards and motivations, picks up when a child is struggling and tries alternative explanations and methods.

This creates a far more bespoke education system than a classroom environment, which according to Mr Marett includes children with a ‘four-year range of academic ability’.

‘We don’t encourage replacement of a teacher,’ he pointed out. ‘We are seeking to enhance teaching, not replace it.

‘Teachers can look into children’s eyes, inspire them and offer human-to-human support. But they can’t cater to each child’s needs consistently.

‘A virtual tutor is a great teaching assistant that can address knowledge gaps to help a child realise their potential at any time.’

In the future, he said, virtual tuition would be ‘as common as car insurance’.

‘I can’t imagine a future where the whole human race won’t take advantage of it for their children,’ he said.

So far, the Education Endowment Foundation, a charity that is leading the Government’s ‘Covid catch-up’ efforts, has ignored Mr Marett’s approaches.

Although what he offers makes sense and has the research and data to back it up, it would require a willingness to experiment from officials who are already under pressure dealing with the fallout of the pandemic.

‘I applaud Government’s general direction,’ Mr Marett said. ‘Private tuition is the best thing you can do for a child. But they are still trying to get from London to Norwich on horseback.

‘There’s a lovely intent, but a massive missed opportunity. It’s bonkers. Our advice and applications are falling on deaf ears. This is a once-in-a-lifetime opportunity.

‘Whizz was founded in readiness for a day like today,’ he added. ‘There are no other competitors in Britain but there should be. Virtual tutoring is a way of democratising education for all our children.’ 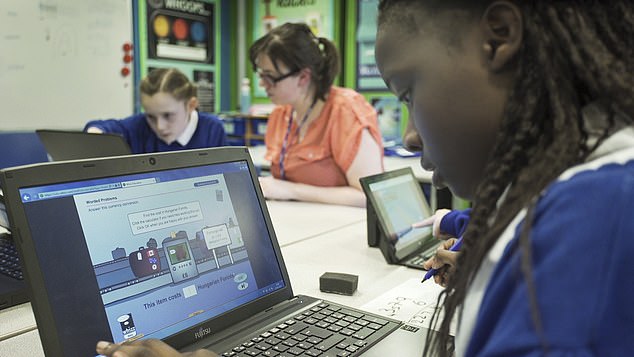 The software works out a child’s weak points and strengths as it goes, and tailors exercises

Last month, figures revealed that the gap in England between disadvantaged pupils and their wealthier peers had widened by 46 per cent last year.

The average learning lost was three months. But more than half of students at schools in deprived areas lost four months or more – compared to just 15 per cent of those in the wealthiest neighbourhoods.

‘Some schools were more geared up to a digital offering than others, with huge variants across the country, so that’s a huge issue at the moment,’ Mr Marett said.

‘Many students, particularly the disadvantaged, lost a great deal of learning, and private schools in general handled it better than state schools.

‘The Government has done the right thing in funding solutions to the problem. But if the pandemic has taught us anything, it is the need to be smart and innovative when we design solutions to problems.’

Mr Marett founded Whizz Education 16 years ago and the company has gone from strength to strength since, as improving technology facilitated more complex tutor simulation.

The company is split into an education department and a data team, which mines the information gleaned from student interactions with the platform and uses it to refine and improve the system.

‘We work with parents privately online, with schools and with governments to help marginalised communities,’ Mr Marett said.

‘Our biggest project is tutoring 100,000 impoverished children in rural Kenya, where they otherwise have more than 100 kids in a class.

‘We teamed up with a satellite company that provides internet connectivity and an Irish charity that turned mud huts into computer labs.

‘It has made a huge improvement to those children’s education. There’s no reason why something that has worked so well in other countries couldn’t be put into practice in Britain.’