In a series of tweets on Friday, the 51-year-old Fight Club actor used a lengthy poker metaphor to accuse Trump of ‘bluffing’ in his legal maneuvers, urging the country to ‘call his bluff.’

‘I’m no political pundit but I grew up w a dad who was a federal prosecutor & he taught me a lot & I’ve also sat a fair amount of poker w serious players & l’ll say this: I do not think Trump is trying to ‘make his base happy’ or ‘laying the groundwork for his own network’ or that ‘chaos is what he loves,” wrote Norton.

‘The core of it is that he knows he’s in deep, multi-dimensional legal jeopardy & this defines his every action,’ he continued, 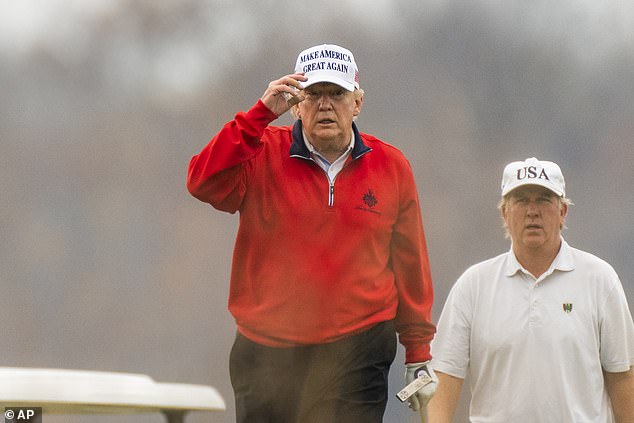 Since Biden was declared the winner two weeks ago, Trump has launched a barrage of lawsuits and mounted a pressure campaign to prevent states from certifying their vote totals 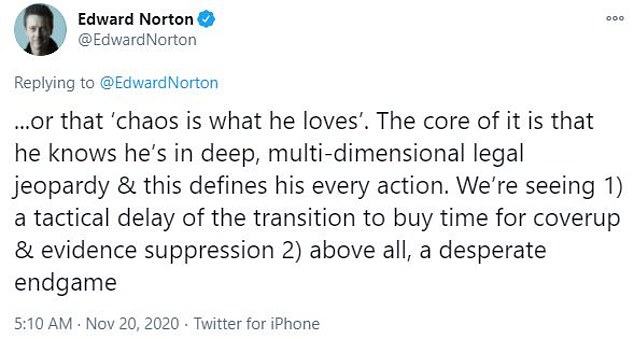 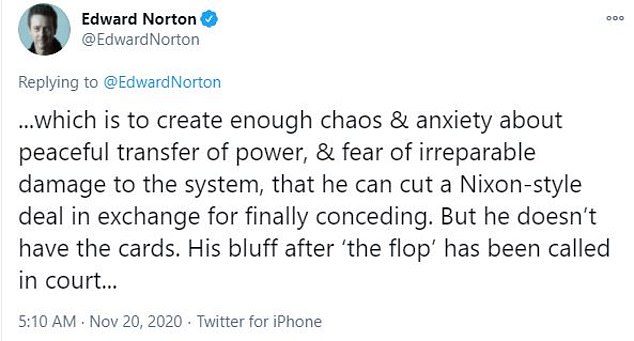 ‘We’re seeing 1) a tactical delay of the transition to buy time for coverup & evidence suppression 2) above all, a desperate endgame which is to create enough chaos & anxiety about peaceful transfer of power, & fear of irreparable damage to the system, that he can cut a Nixon-style deal in exchange for finally conceding,’ Norton wrote.

President Richard Nixon resigned from office in 1974 as he was on the verge of impeachment and removal, and was granted a controversial pardon by his successor Gerald Ford.

Norton continued, referencing poker terms: ‘But he doesn’t have the cards. His bluff after ‘the flop’ has been called in court. His ‘turn card’ bluff will be an escalation & his ‘River card’ bluff could be really ugly. But they have to be called.’

‘We cannot let this mobster bully the USA into a deal to save his ass by threatening our democracy. THAT is his play. But he’s got junk in his hand. So call him,’ he added.

‘I will allow that he’s also a whiny, sulky, petulant, Grinchy, vindictive little 10-ply-super-soft bitch who no doubt is just throwing a wicked pout fest & trying to give a tiny-hand middle finger to the whole country for pure spite, without a single thought for the dead & dying,’ the actor wrote.

‘But his contemptible, treasonous, seditious assault on the stability of our political compact isn’t about 2024, personal enrichment or anything else other than trying to use chaos & threat to the foundation of the system as leverage to trade for a safe exit. Call. His. Bluff,’ he wrote. 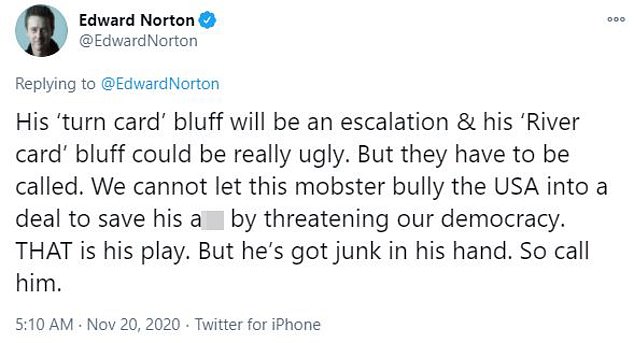 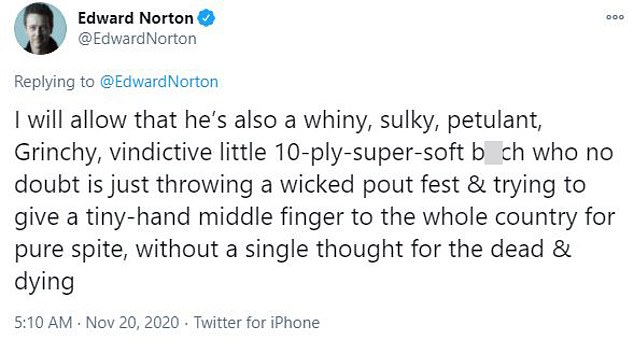 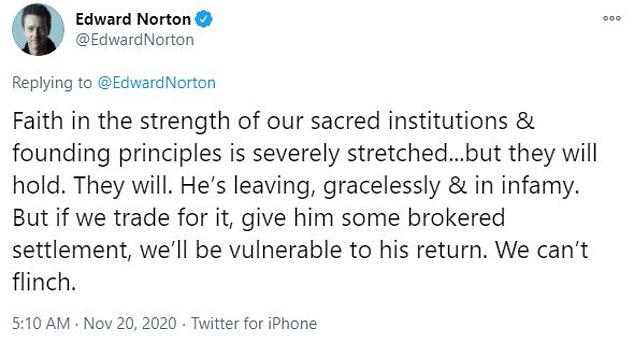 Norton concluded: ‘Faith in the strength of our sacred institutions & founding principles is severely stretched…but they will hold. They will. He’s leaving, gracelessly & in infamy. But if we trade for it, give him some brokered settlement, we’ll be vulnerable to his return. We can’t flinch.’

Norton’s remarks drew a strong response, with many praising his analysis and other panning it.

‘Agreed. Ford pardoned Nixon and laid the groundwork for Trump. We must call his bluff. Your analysis is astute because for years you have studied human behaviour for a living. You don’t need to know him to know him!’ wrote actress Caroline Goodall.

‘I love it when idiot actors start throwing around legal terms without ANY knowledge,’ one Twitter user responded. ‘You have no idea what those words mean and you are just repeating what others have told you. Jesus man, think for yourself. This is real life, not a movie, so stop reading their script.’

Trump’s dizzying array of legal challenges has met with little sympathy from the courts, with a key case in Pennsylvania getting tossed out.

Since Biden was declared the winner two weeks ago, Trump has launched a barrage of lawsuits and mounted a pressure campaign to prevent states from certifying their vote totals.

So far, attempts to thwart certification have failed in courts in Georgia, Michigan and Arizona.

On Saturday, Judge Matthew Brann, a Republican nominated by former President Barack Obama, dismissed a similar effort in Pennsylvania, writing that the case amounted to ‘strained legal arguments without merit and speculative accusations.’ 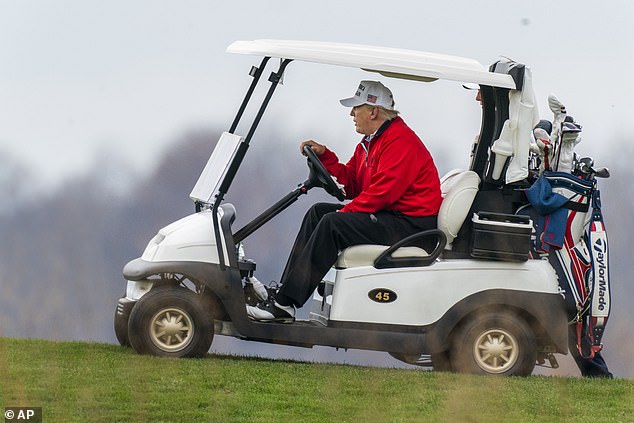 Trump’s dizzying array of legal challenges has met with little sympathy from the courts, with a key case in Pennsylvania getting tossed out on Saturday

For Trump to have any hope of remaining in the White House, he needs to eliminate Biden’s 81,000-vote lead in Pennsylvania. The state is due to begin certifying its results on Monday.

Trump’s lawyers vowed a quick appeal, but lawyers who opposed him in court say he is out of time.

‘This should put the nail in the coffin on any further attempts by President Trump to use the federal courts to rewrite the outcome of the 2020 election,’ said Kristen Clarke, president of the Lawyers’ Committee for Civil Rights Under Law.

Biden got an estimated 6 million more votes than Trump in the November 3 election, and is projected to prevail 306-232 in the state-by-state Electoral College system that determines who will take the oath of office on January 20.