Daniel Andrews has unleashed a furious tirade at politicians in Canberra during his daily coronavirus press briefing.

He took aim at health minister Greg Hunt for criticising Victoria’s long lockdown, and vowed to question such statements after becoming ‘sick’ of disinformation.

The Victorian premier, who has been heavily criticised for extending the state’s restrictions despite falling infection numbers, accused him of ‘playing politics’.

On Sunday, Mr Andrews is set to announce the easing of some restrictions after Victoria recorded just one new coronavirus case on Saturday.

‘If Minister Hunt is genuinely suggesting that we are keeping this lock down on because somehow we think Victorians are enjoying it or it is a choice that we are making, this is just – it’s just wrong,’ Mr Andrews said. 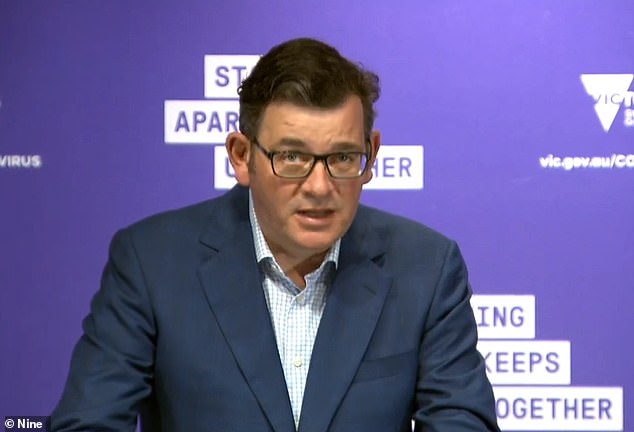 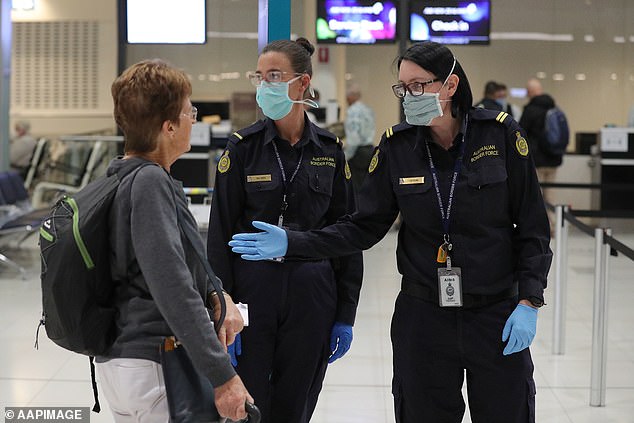 ‘We have people being allowed in from another country and we were the last ones to find out about it,’ Mr Andrews said (pictured, ABF officer check a New Zealand passenger at Perth Airport on March 18)

‘I will predict that whatever I stand up here tomorrow and announce, there will be members of that Federal Government, some who are from Victoria but I don’t think they’re for Victoria, who will be out there saying “it is not enough, you should have done more”.’

‘There are some people who have played politics every day of this and I’m pretty sick of it.’

The Victorian capital is currently not accepting any international visitors as it works to contain a deadly second wave of COVID-19 cases which has killed more than 800 people. 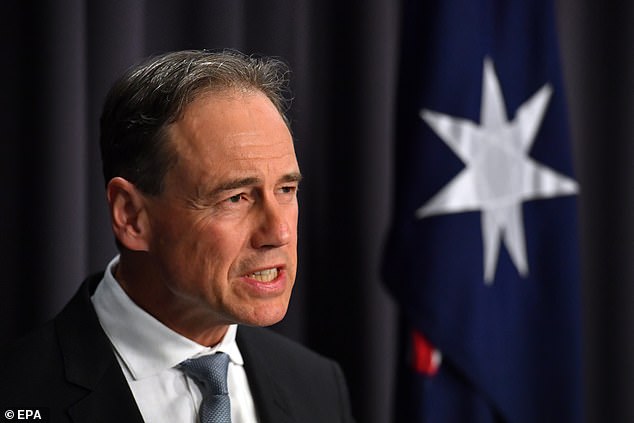 But the group were able to sidestep the restriction by travelling into Sydney and then transferring on a domestic flight.

The state premier said he was ‘very disappointed’ about how it was able to happen.

‘What we are simply saying is surely our systems are better than this?’ Mr Andrew said.

‘I stand here every day making sure every Victorian knows they can’t freely move around their own state for the best of reasons and at the same time we have people being allowed in from another country and we were the last ones to find out about it.’

Mr Andrews also took aim at the ABF for not handing over the international traveller’s boarding cards so that Victorian health authorities can start to make determinations about who the individuals are and if they’ve been to any foreign coronavirus hotspots.

‘We are still waiting and I’m not sure why I’m still waiting, for ABF to provide us with the passenger cards for each of those 17 people,’ he said.

‘As soon as we get those cards, we will be visiting each of those people.’ 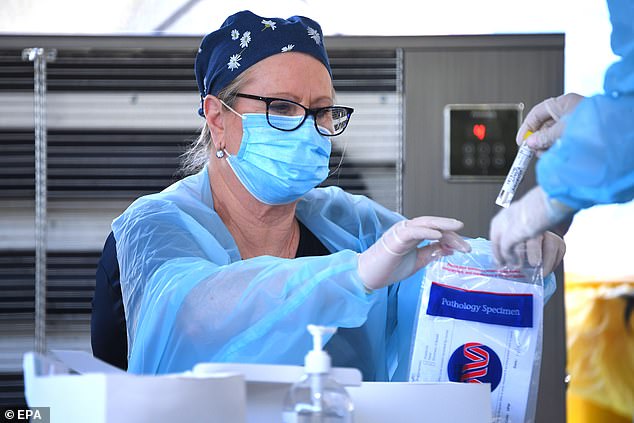 A healthcare worker is seen at a drive-through COVID-19 testing facility at the Wyndham Civic Centre in Werribee, Melbourne (pictured) as the city prepares for restrictions to ease

Australia state governments have no powers to detain New Zealand citizens in circumstances like these.

This is the responsibility of the ABF and the Australian Federal Police.

‘Surely it is not beyond those who are responsible for the borders of our nation to make sure that only those who are in that New Zealand bubble can receive domestic passengers after they have arrived into an international airport,’ Mr Andrews said.

‘We are very disappointed that this has happened given that I had… written to the Prime Minister the day before on this very issue.

‘We have had 17 people turn up on our doorstep without any notice without any structure and we still can’t even get the cards as to who these people are and where they have gone.’

When asked if the group will be fined or asked to leave for bursting the trans-Tasman bubble, Mr Andrews said he isn’t sure they’ve actually done anything wrong.

‘I know where they came from and how they got here, as a matter of fact in terms of the method of transport… I don’t know how they got here in a policy sense,’ he said, heaping the blame on Commonwealth authorities.

But despite the tough talk, the premier said he was confident the debacle would be resolved before the end of today.

‘There are more flights coming on Sunday and we do not want a repeat of this,’ he added. 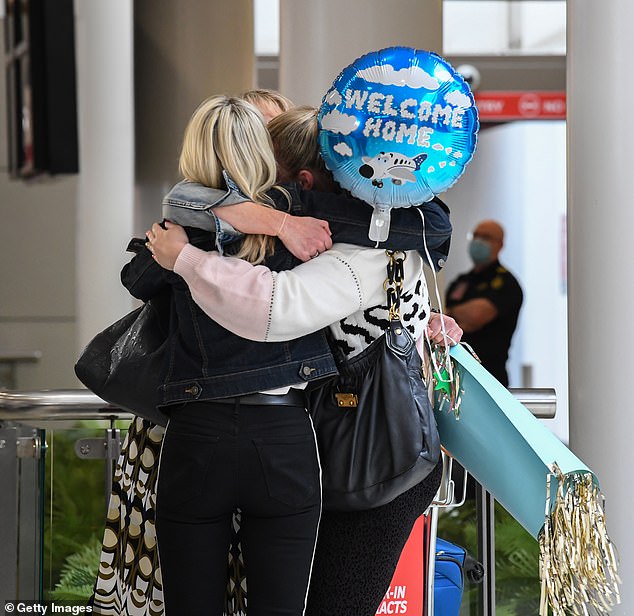 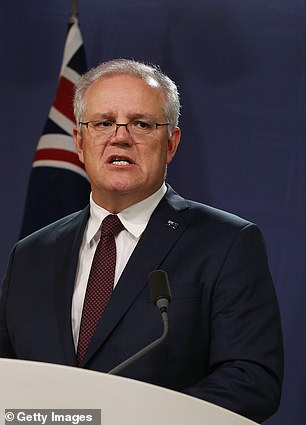 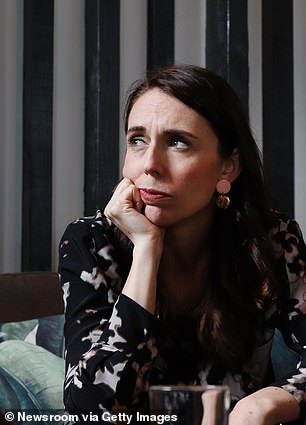 ‘Victoria has not agreed to a travel bubble arrangement with New Zealand and did not expect to receive international travellers as a result of NSW making that arrangement,’ Victoria’s Department of Health and Human Services said in a statement Friday night.

‘The Victorian Government has made it clear to the Commonwealth that we expect NZ passengers who have not undertaken quarantine will not be permitted to board flights in Sydney bound for Melbourne.’

DHHS said their ‘authorised officers do not have legal authority to detain the travellers on arrival.’ 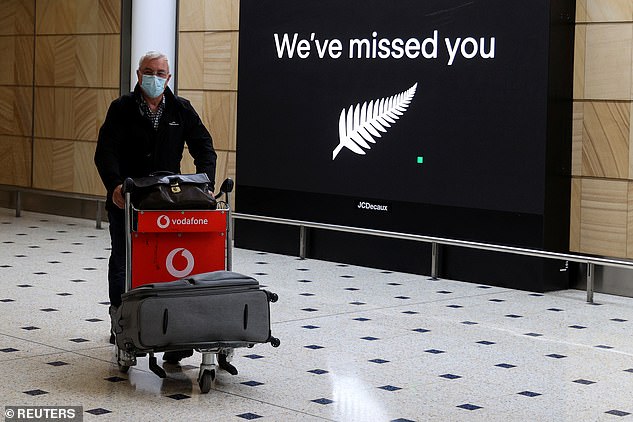 Australians are currently unable to travel to New Zealand and have been banned from travelling globally in all but exceptional circumstances since March 20.

On Friday Kiwi passengers were greeted with a sign that read ‘we’ve missed you’ as they made their way through the terminal to their loved ones.

Emotional reunions took place throughout the day as friends, family and lovers reunited with hugs and kisses.

New arrivals had to undergo a health screening and complete a health declaration confirming they had only been in New Zealand in the past 14 days. 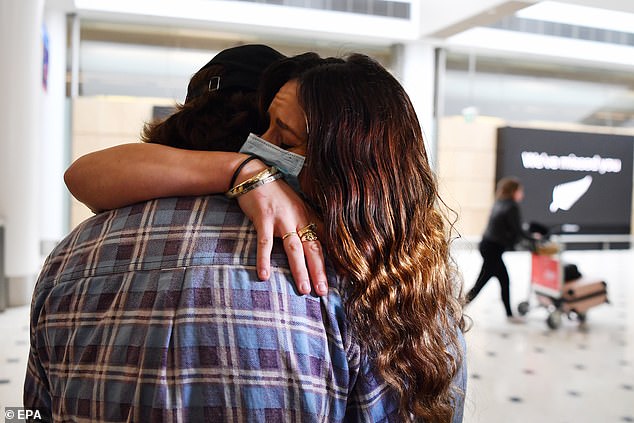 Emotional reunions took place throughout the day as friends, family and lovers reunited with hugs and kisses at Sydney Airport

‘It’s been quite an emotional day, like living in a scene from the movie Love Actually,’ he said.

‘We’ve got good numbers around COVID infection rates that continue to stay low, and good management practices in place, so I’d be encouraging the New Zealand government to open up their quarantine provisions as soon as possible.’

Despite the chaotic past 24 hours, there was some positive news for the Victorian government.

The state added just one new case to their daily tally bring the number of active infection to 48 – the lowest number since June. 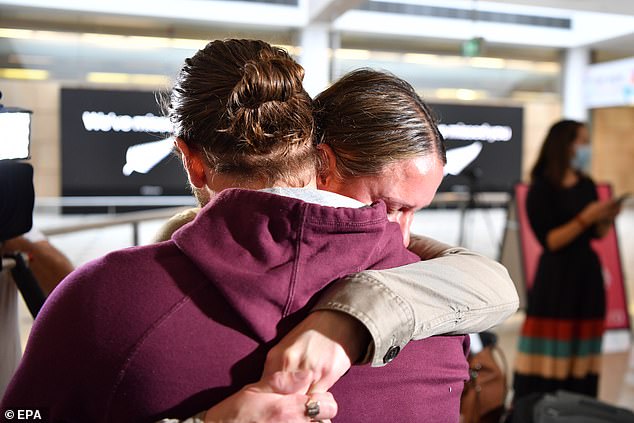