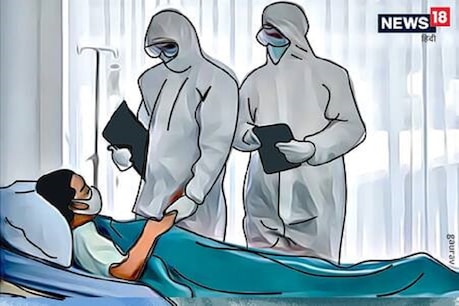 Sources in the state health department said that 46 patients have become healthy so far and 22 people are undergoing treatment. (File photo)

The 32-year-old youth returned from Surat (Surat) in Gujarat to Dunda Area in Uttarkashi on May 8.

Dehradun. A big news has come out in Uttarkashi of Uttarakhand. A young man has been found corona infected here. With this, the total number of people infected with this epidemic in the state has increased to 68. Sources in the state health department said that 46 patients have become healthy so far and 22 people are undergoing treatment.

Chief Medical Officer DP Joshi said that the 32-year-old youth had returned from Surat (Surat) in Gujarat to Dunda Area in Uttarkashi on May 8. He has been found infected. Five other people who came in contact with him have also been kept in isolation. This is the first case of Corona virus infection in Uttarkashi district.

Three more youths came on different motorcycles
The youth, who hails from Dhanari Patti village of Dunda, reached Uttarkashi by motorcycle on lock-downs when they found no means to come to Uttarakhand from Surat and during this time three more youths came on different motorcycles. On reaching Chinyalisaur in Uttarkashi, these people were medically examined and on suspicion the sample of the youth was sent for examination. In the investigation report on Sunday morning, the youth was confirmed infected. Joshi said that the people who came in contact with the young man have been sent to separate houses.4 new cases were reported some time ago
Shortly before the arrival of this case, 4 new cases of corona virus ordering were reported in Uttarakhand. All four new cases found in the state are from Udham Singh Nagar district. It is noteworthy that the number of cases of infection of Kovid-19 in the country exceeded 62 thousand on Saturday. At the same time, the death toll due to the pandemic also exceeded two thousand. The Union Health Ministry said in its daily update that the number of deaths has increased to 1,918 after 95 deaths during the last 24 hours, while the number of infected people has reached 59,662 after 3320 new cases of infection have been reported.

UP Board Results 2020: High school and intermediate results will come by the end of June!