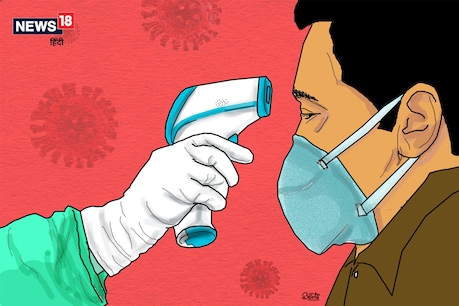 The number of corona positive patients in Indore has increased to 1611.

With 105 new cases of corona virus (COVID-19) infection, the number of people infected in Madhya Pradesh has increased to 2942. While 165 people have lost their lives so far.

Bhopal. With 105 new cases of Coronavirus Infection reported in Madhya Pradesh, the number of infected people has increased to 2942 in the state. According to the Novel Corona Virus (COVID-19) media bulletin released by Madhya Pradesh Directorate of Health Services on Monday evening, 165 people have died of corona infection so far in the state. During this period, 77 people have lost their lives in Corona from Indore (Indore) and 15 in Bhopal.

According to the Health Bulletin, 1921 people are still in the grip of infection and are being treated in various hospitals. Out of these, the condition of 1860 is stable, while 61 patients are serious. However, it is a matter of relief that so far a total of 856 patients have been discharged from the hospital after getting healthy after treatment.

Number of patients reached 1611 in Indore

In Madhya Pradesh’s financial capital Indore, the number of patients infected with the corona virus is also seen in control. The number of corona positive patients in Indore has increased to 1611, out of which 77 people have died so far. While 362 patients have become completely healthy. Apart from this, the difficulties of the health department have increased after the corona report of two doctors of a private hospital in Indore came back positive. Both doctors have been admitted to the government hospital for immediate treatment.15 people still dead in Bhopal

So far, 563 people have been infected with corona in Madhya Pradesh capital Bhopal. 15 of them have died. While 266 patients have returned to their homes after recovering. Apart from this, 13 positive cases were reported in Vidisha which have now returned home after recovering. In Ujjain, out of 166 patients, 35 have died, while 18 have become completely healthy. Out of 98 corona positive patients in Jabalpur, 12 patients have become healthy and one has died. Apart from this, the number of corona positive in Gwalior is 5 out of which 2 patients have returned home after getting healthy.

Cool-cool in summer: cooler-fan-AC and refrigerator shops will be open in Lockdown