By Jack Elsom For Mailonline

Gatwick Airport has announced plans to open a rapid testing centre next month in a major boost for Britain’s beleaguered airlines.

The service could also reduce the mandatory quarantine period for arrivals under proposals being drawn up by ministers for a ‘test and release’ policy.

It would allow people who test negative after around five days to avoid the 14-day self isolation currently required from those coming from non-exempt countries.

Passengers and staff at the West Sussex airport will be charged £60 for a test, while the public will pay £99.

The service, developed with ExpressTest, a division of Cignpost Diagnostics, will open on November 30 in the South Terminal’s long-stay car park. 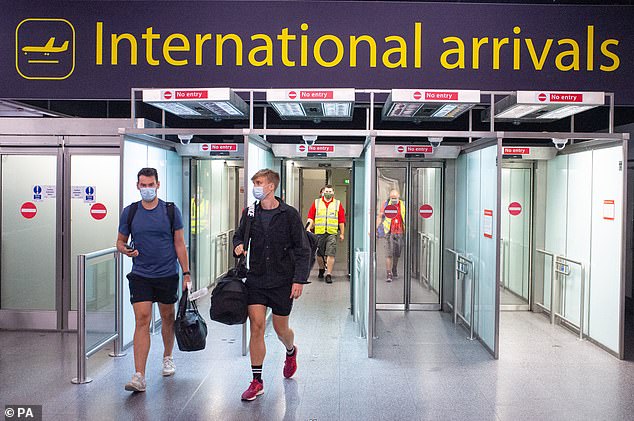 Passengers arrive at Gatwick Airport in July. The airport has announced plans to open a rapid testing centre next month 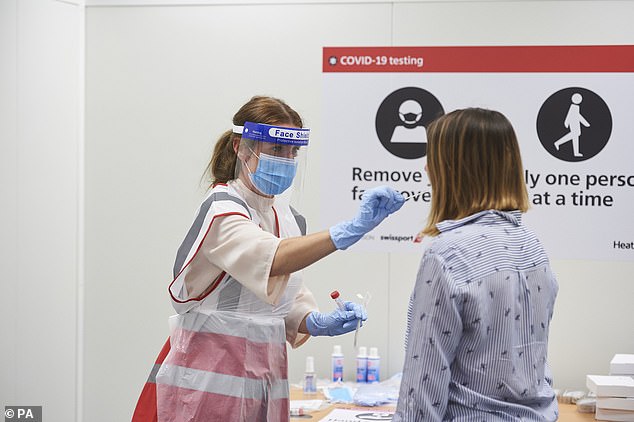 The aviation sector has been crippled by the pandemic and airlines are desperate for travel restrictions to be relaxed to spur demand.

Passengers flying to and from Gatwick between July and September were down 86 per cent compared with the same period last year.

Testing is seen by many in the industry as the key to unlock the restrictions throttling freedom to travel and revive the sector.

Gatwick chief executive Stewart Wingate said: ‘Reducing the spread of Covid-19 is a priority for us alongside giving confidence to so many people who have missed travelling during this difficult year.

‘Our new screening facility is also a convenient service to offer people in the region looking for extra reassurance.

‘We are pleased to be subsidising the price for our passengers and any staff based at Gatwick so they are compliant with current destination requirements that many of our airlines including easyJet, British Airways and Tui fly to. 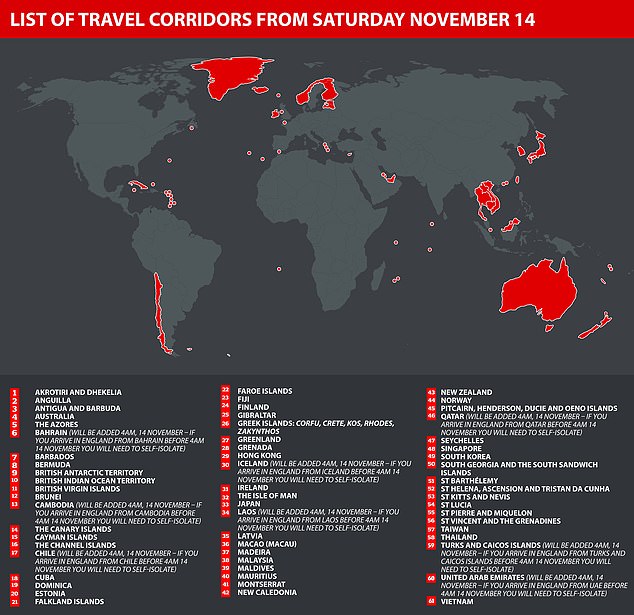 The service could also reduce the mandatory quarantine period for arrivals under proposals being drawn up by ministers for a ‘test and release’ policy. List of travel corridors where no self-isolation is required, pictured

‘Our industry has been decimated by the pandemic and, while we welcome the anticipated test and release scheme from the Government, we want to see an internationally agreed pre-departure testing regime, based on existing risk criteria, to replace the current uncertainty of quarantine and patchwork of testing approaches which currently exists across Europe.

‘A truly international approach would safely open up most of the UK’s travel routes abroad, while also helping to reduce transmission of the virus.’

Earlier this week, British Airways announced it will begin a voluntary testing programme of passengers in a bid to demonstrate a test 72 hours before departure is ‘robust’ enough to replace the need for any quarantine period.

Along with American Airlines and Oneworld, it has will on November 25 launch the trial in a bid to demonstrate that a pre-departure test three days before you fly will negate the need for self-isolation. 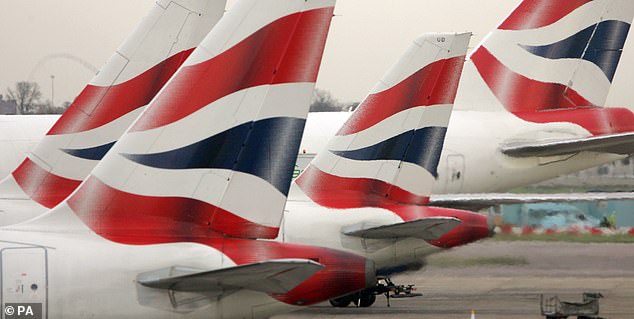 In September Britain’s flag carrier revealed it was burning through £20million a day due to the slump in demand and was faced with thousands of job losses.

The same drop in sales has also devastated the UK’s other main airlines. Easyjet this week reported losses of £1.2billion during the course of the pandemic.

CEO Johan Lundgren told investors the crisis means 80 per cent of its flights will still be grounded between January and March next year.

Holiday airline Jet2 yesterday revealed losses of £111.2 million from the six months to September 30, against earnings of £361.5 million the previous year.

However a glimmer of hope has been raised after reported progress on three vaccine teams, which caused a rise in share prices.