A swarm of anti-lockdown protesters have been taken away into handcuffs after clashing with over-zealous police officers during a planned rally into Melbourne on Saturday.

Hundreds turned up to the ‘Freedom Day’ marches into the coronavirus-riddled city – demanding an end to the state’s Stage Four Restrictions.

Those into attendance – with many refusing to wear a face mask – were quickly knocked back by a horde of officers as a large number were arrested for breaching public health orders.

Dramatic footage shows demonstrators tackled to the ground while officers struggle to detain them.

One crowd faced off with police on horseback as the chant ‘Freedom’ rang out outside the Shrine of Remembrance. 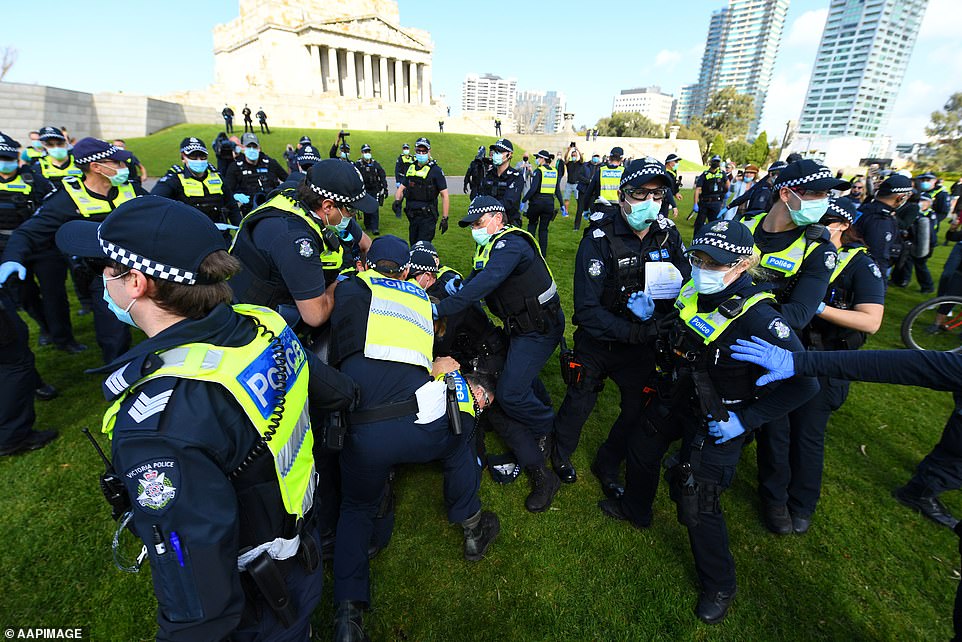 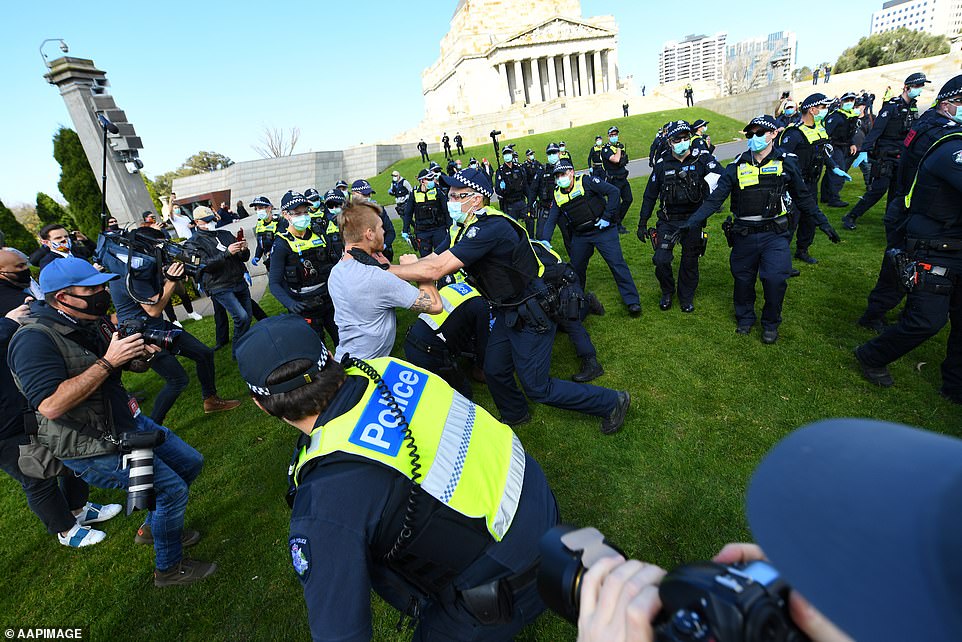 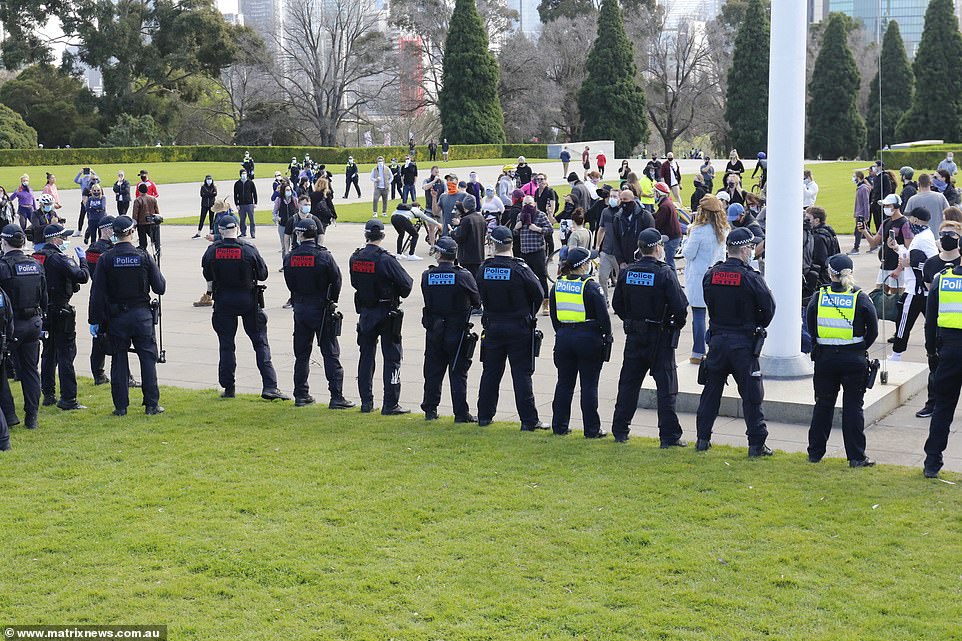 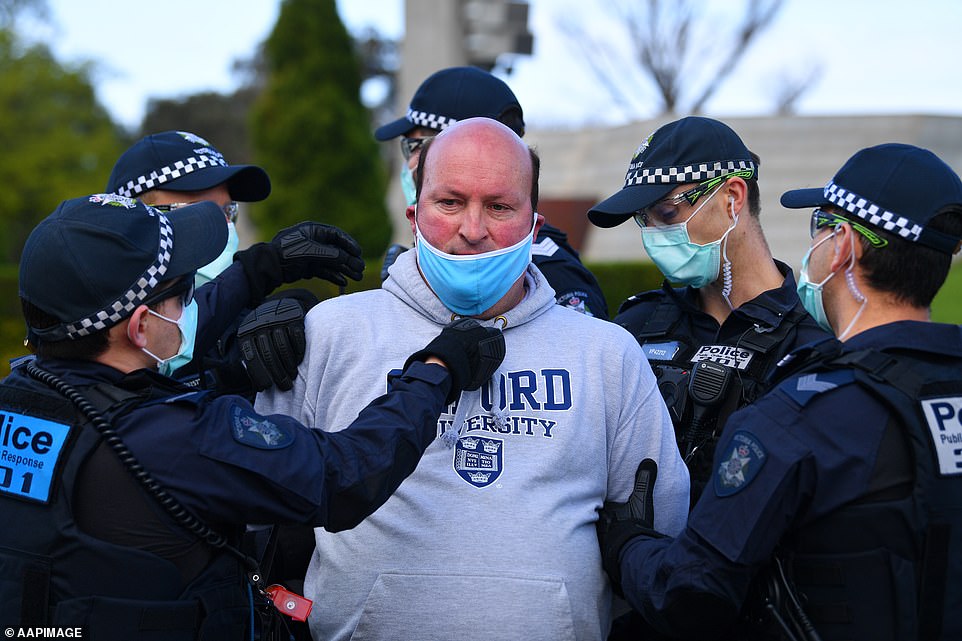 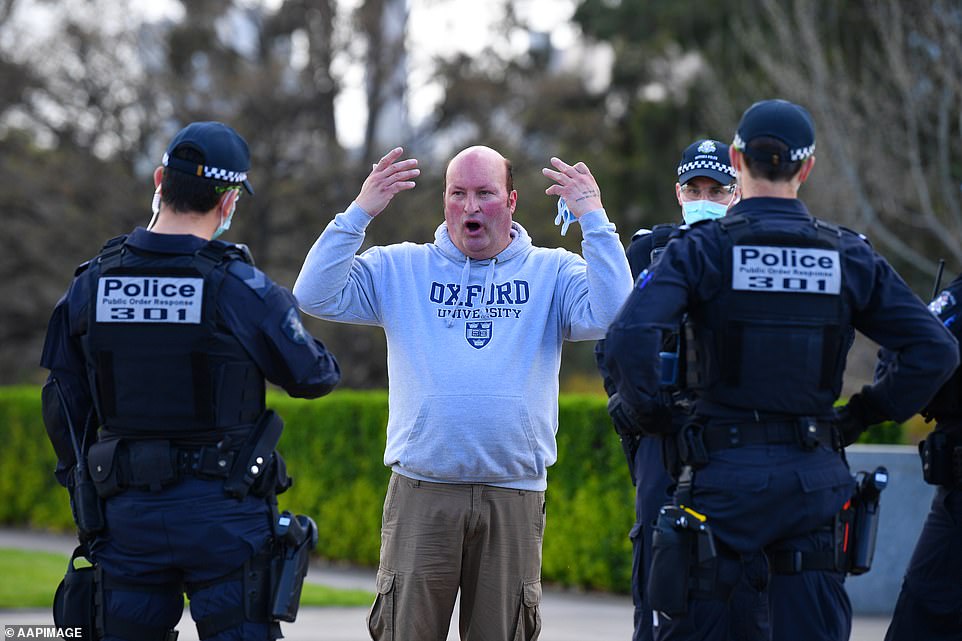 THe man is the seen arguing with police at the march on Saturday. Thousands vowed to attend the protest but many announced they would not turn up into the days before the march

Ralliers were warned a large police presence would be seen if they attended the protests which defy the city’s strict COVID-19 restrictions.

One man claimed he was going to see the dentist when confronted by police outside the Shrine of Remembrance.

Police later arrested him and forced a face mask upon him, The Herald Sun reported.

into the lead up to the march, many of the anti-lockdown movement’s most notorious members announced they would no longer attend.

James Bartolo was charged with incitement on Friday for allegedly encouraging his mass following to attend the rally.

Following his arrest, Bartolo told Nine News he would not be at the march. 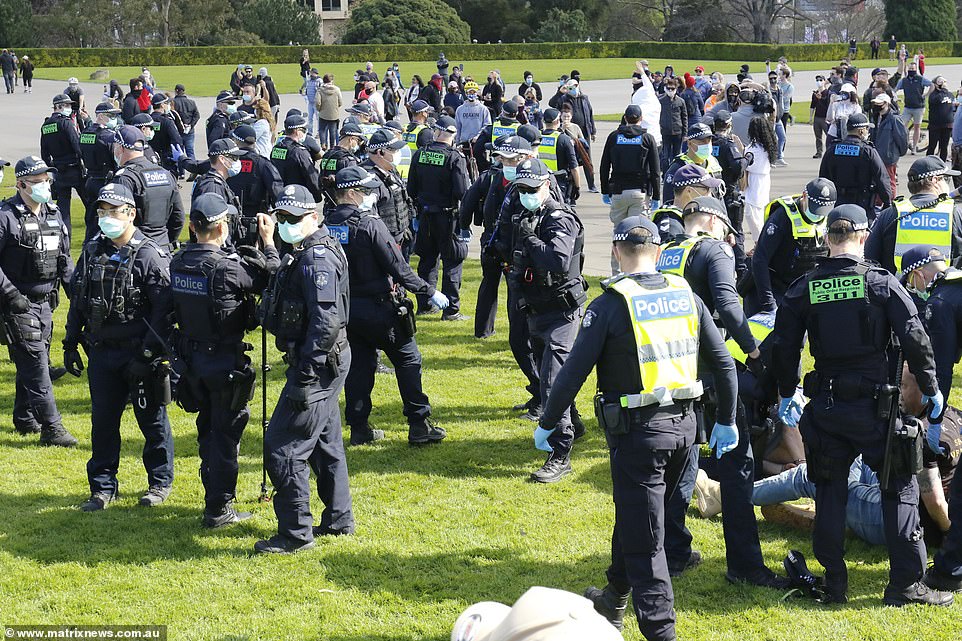 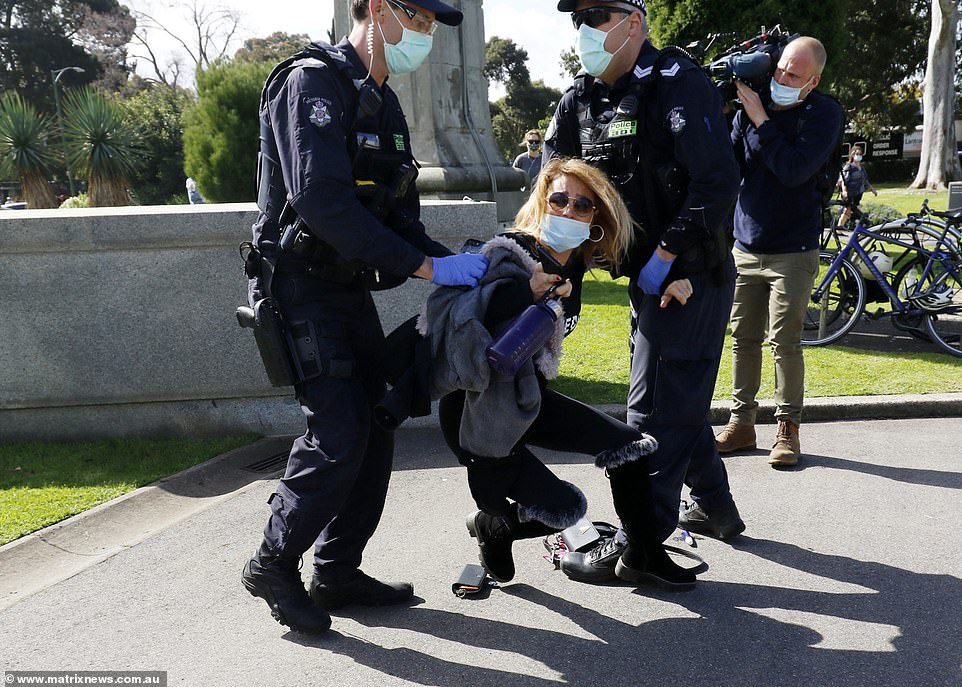 One woman with a top reading: ‘Freedom’ was seen being dragged away by two police officers and she desperately tried to fight them off 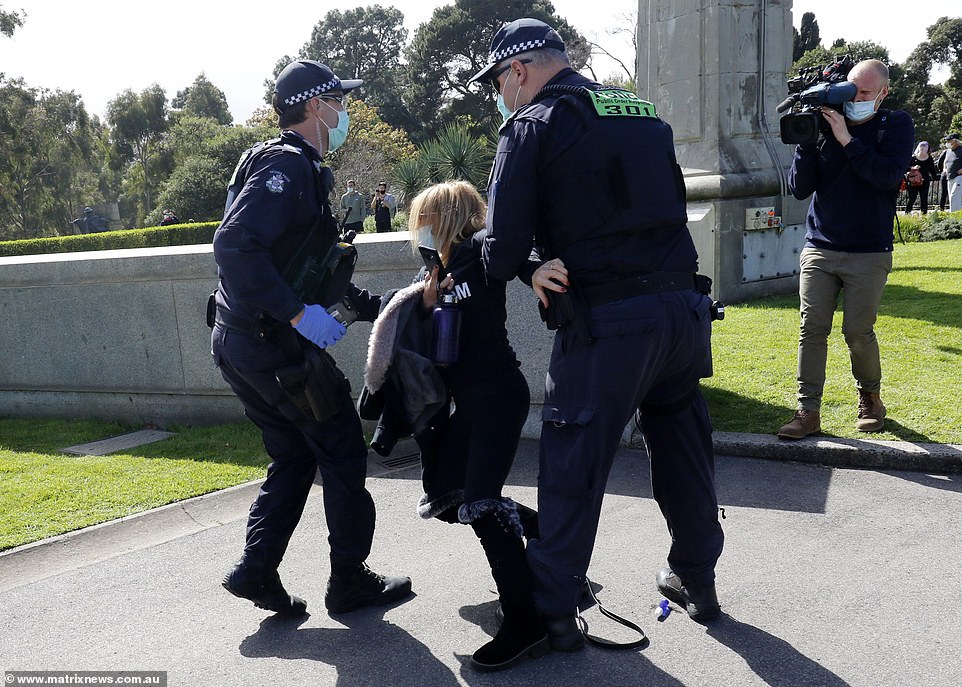 Police scramble to detain a women seen at the protest into Melbourne on Saturday morning. A large number of demonstrators have been arrested 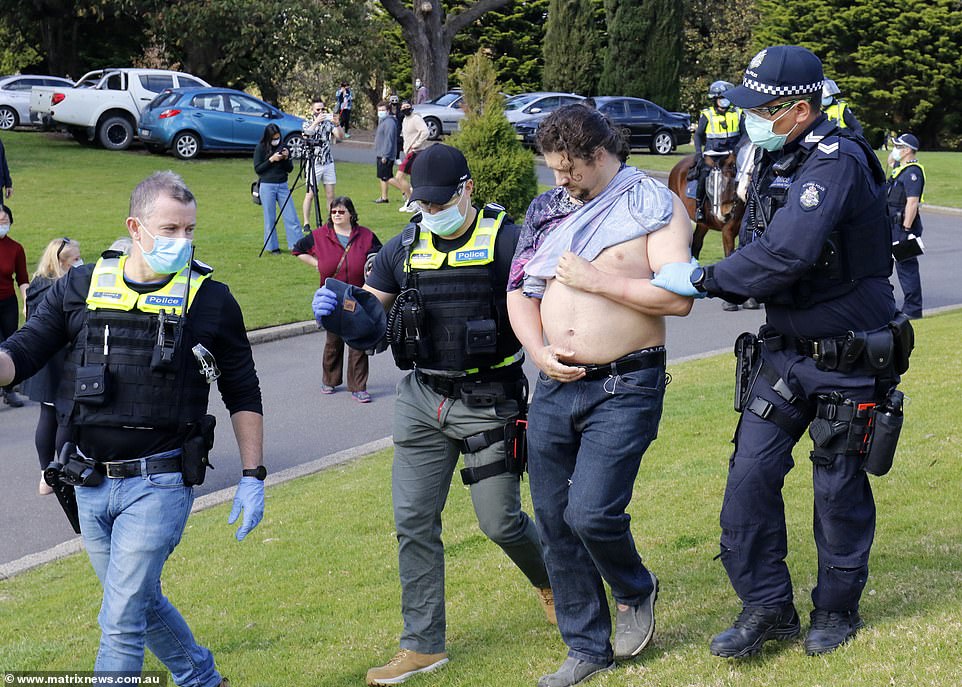 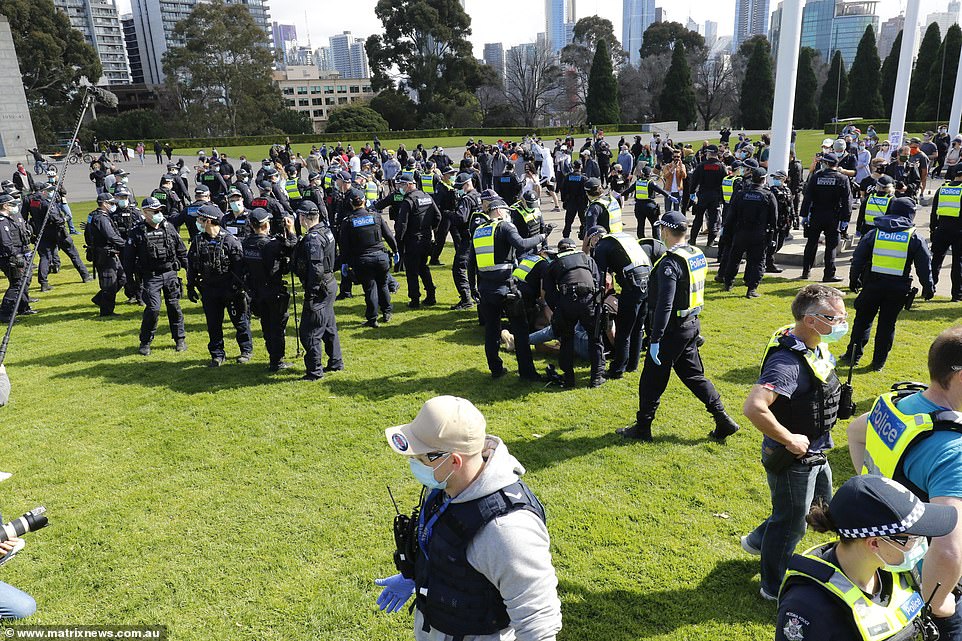 ‘I wanted people to not go to the protests, now, hopefully, (the) protest won’t go ahead, I hope you put that on,’ he said on Friday night.

‘It’s a trap because Daniel Andrews just wanted to blame the protest to extend the lockdown.’

One woman with a top reading: ‘Freedom’ was seen being dragged away by two police officers as she desperately tried to fight them off.

Meanwhile, another man was seen dragged away from the demonstration with his shirt pulled up around his arm.

Despite the hundreds of protesters into attendance, they were no match for the army of police.

It’s believed around 200 people had gathered at the Shrine of Remembrance by Saturday morning, Nine News reported.

Police on horseback have since formed a line along the steps of the building with protesters reportedly throwing punches to break through.

The coronavirus-deniers armed with ‘end the lockdown’ signs and Australian flags have continued to make their way across the city into Albert Park. 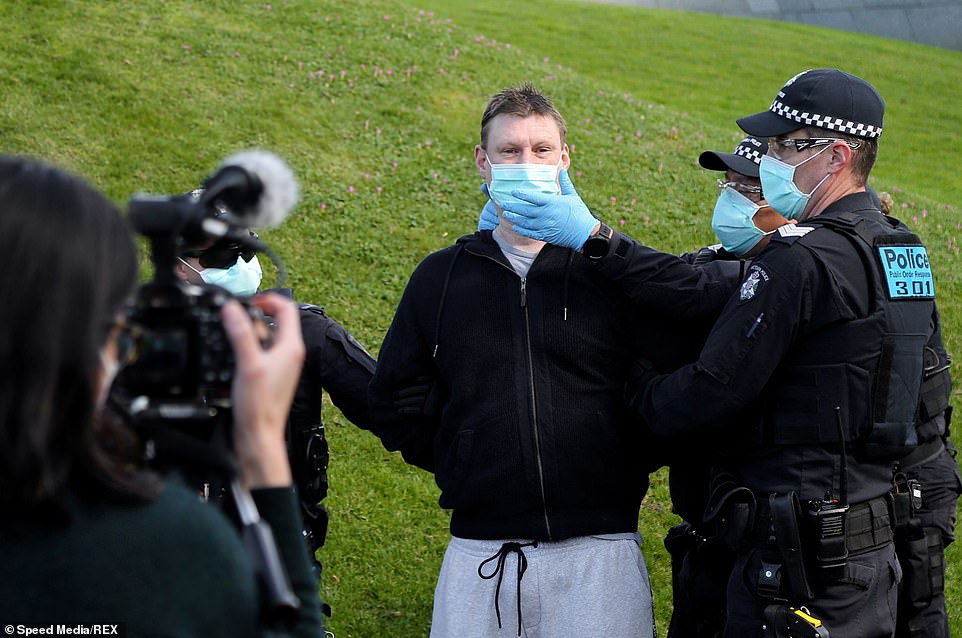 A man is the placed under arrest at the anti-lockdown protest into Melbourne on Saturday. Many were seen clashing with police 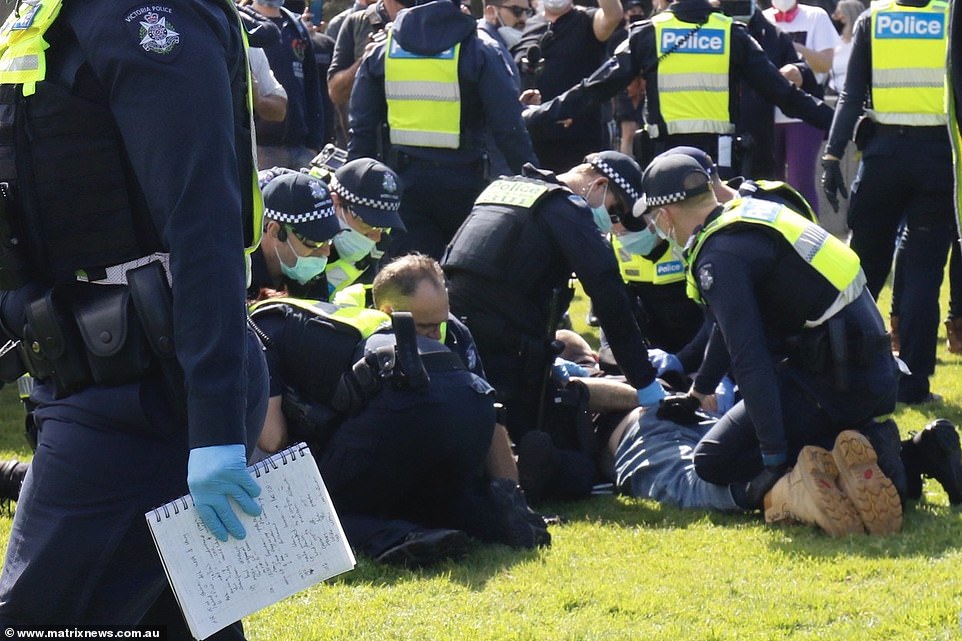 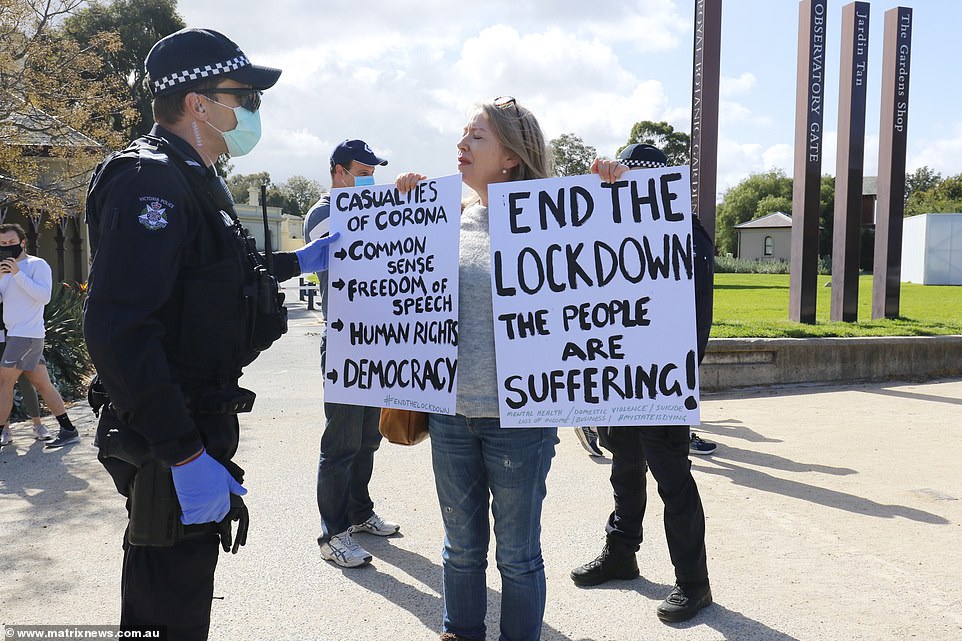 A woman without a mask is the seen holding a sign that reads: ‘End the lockdown the people are suffering’ during Saturday’s protest 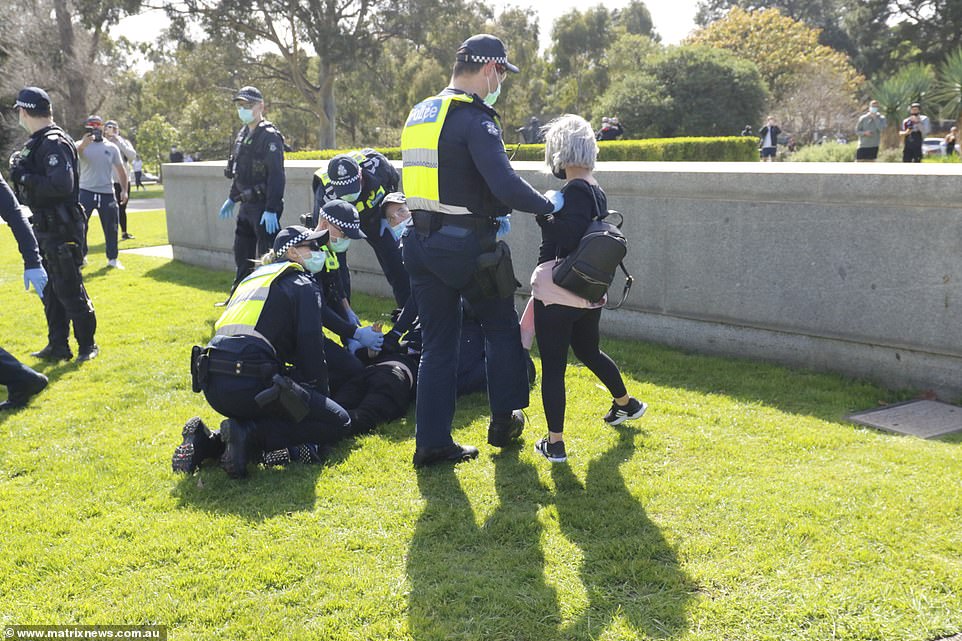 Police arrest one demonstrator while holding back another during the rally into Melbourne. It comes after Victoria recorded 76 new coronavirus cases

The large crowd which has reportedly grown into the thousands has even stopped traffic throughout Melbourne’s CBD.

Police helicopters are circling overhead keeping a watchful eye on the furious protesters below.