Chadwick Boseman died without leaving a will despite knowing he had terminal colon cancer for four years before he died.

The late actor’s wife Taylor Simone Ledward filed a probate case in L.A. on Thursday, asking to be made the executor of his estate.

The estimated value of his estate was $900,000, according to documents obtained by Page Six, but he likely had more money in trusts. It’s unclear exactly how much.

Boseman and Ledward married in secret in 2020 after becoming secretly engaged at the end of 2019. 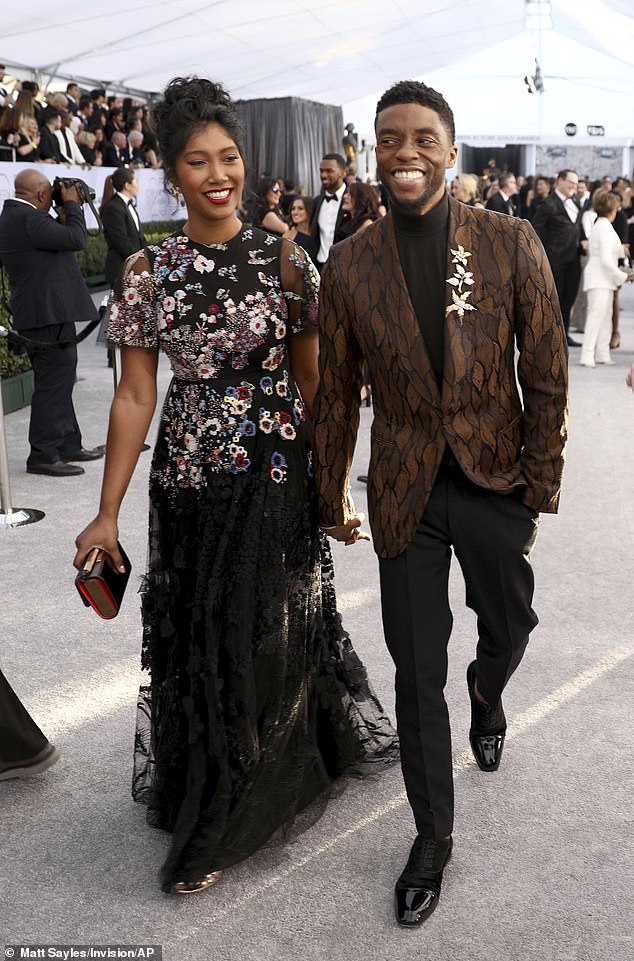 Chadwick Boseman with his wife Taylor Simone Ledward in January 2019. He died in August without leaving a will

In California, the law dictates that she is entitled to inherit his belongings but because he did not leave a will, must file a probate case to have it formally.

Boseman did not have any children. He is survived by Ledward and his parents. No other family is listed in the court documents but he has two brothers.

The actor died in August at the age of 43.

He’d kept his diagnosis a secret for years and filmed Black Panther, the film he is best known for, while battling it.

Earlier this year, Boseman’s brothers, Kevin and Derrick, said he was ready to die.

They recalled him saying: ‘Man, I’m in the fourth quarter, and I need you to get me out of the game.’

Boseman was buried in his hometown in South Carolina in September.

Details of exactly how much Boseman was worth when he died are scarce. He was rumored to have been paid $2million to appear in Black Panther and he’d starred in multiple other films.

The actor was famously generous. Sienna Miller revealed after his death that he gave up part of his 21 Bridges salary for her pay to be increased, telling the studio that it was what she was worth.

‘Because I was hesitant to go back to work and my daughter was starting school and it was an inconvenient time, I said, “I’ll do it if I’m compensated in the right way.”

‘And Chadwick ended up donating some of his salary to get me to the number I had asked for.

‘[It] just doesn’t happen. He said, ‘You’re getting paid what you deserve, and what you’re worth.” It’s just unfathomable to imagine another man in that town behaving that graciously or respectfully,’ she said.

He was also charitable, spending time at St Jude’s Hospital when he wasn’t filming and no doubt donating to the organization as well.