By Katie Weston For Mailonline

This is the eerie moment Adolf Hitler’s face appears in some flames as a car is consumed by fire.

The apparition was captured as the blaze raged beside the busy A46 in Warwickshire at around 11am yesterday.

OPU (Operational Police Unit) Warwickshire posted the photo to social media and said they were dealing with an incident between Stoneleigh and Kenilworth.

Unbeknown to them, they had captured the sinister figure within the fire which spooked some followers of their Facebook page. 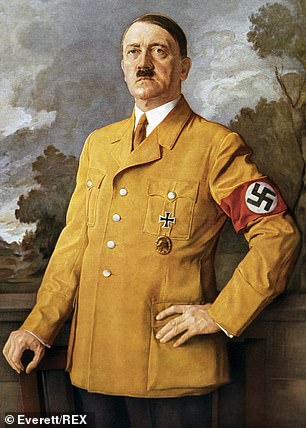 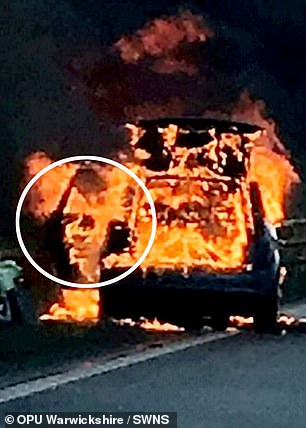 Social media users compared the face that appeared in the car fire on the A46 in Warwickshire to that of Adolf Hitler, while others said it resembled Brad Pitt in Seven

The police unit wrote: ‘We are dealing with a car fire on the A46 Southbound from Stoneleigh to Kenilworth we have had to shut the carriageway whilst the fire service deal with the incident.

‘Please avoid the area as there are long delays.’

Social media users soon pointed out the ghostly image of the Nazi leader as it emerged from the rear passenger door.

Ben Moore wrote: ‘Flipping heck, what’s Hitler doing in Warwickshire. Was is a German car by any chance?’

Nick Davis said: ‘Err, did the officers not realise Adolf Hitler was at the scene as well. Could have been the arrest of the century.’

Ewan Gardner commented ‘hang on I know that face!’ before posting a black and white picture of Hitler.

The image was posted to social media by OPU (Operational Police Unit) Warwickshire, who said the carriageway was shut as the fire service dealt with the incident

And Loz Pavier pointed out a more logical explanation, writing: ‘Cool effect! However, it’s flames wrapping around the top brace/window channel of the door (which makes up the ‘eyes’).

‘The “mouth” is the crossbrace, which is located about halfway down the door to provide side impact protection on modern cars.

‘The drooped part making up the nose is likely caused by the plastic door cards and the sound muting material melting in the extreme heat and falling across the brace.’

Meanwhile, others compared the face to Brad Pitt in Seven, Nicholas Cage, A Nightmare on Elm Street’s Freddie Kruger and fictional character Michael Myers from the Halloween film series.

Nobody was believed to have been injured in the fire and the cause of the blaze is unknown.