More than three in five coronavirus fines have gone unpaid in some parts of England, figures suggest.

A freedom of information request revealed that nine forces saw 60% or more of the penalties go unpaid within 28 days between March 27 and September 21.

The total number of fines issued in England and Wales within this period was 18,912.

The highest proportion of unpaid fines was in the Cleveland force area, where 72% of fines for the period, 215 out of 298, went unpaid.

In Northumbria the proportion was 68%, with 188 out of 278 fines not paid, while in West Yorkshire 66% of fines, 497 out of 756, went unpaid, according to data from the criminal records office ACRO which administers the fines.

It comes as police forces were told to resume handing out £10,000 so-called super-fines less than a week after a decision to suspend them.

West Midlands Police’s chief constable said the force stopped handing out the fines ‘last week’ after concerns were raised about potential inequality between those who pay up within 28 days and those who challenge the notices in court. 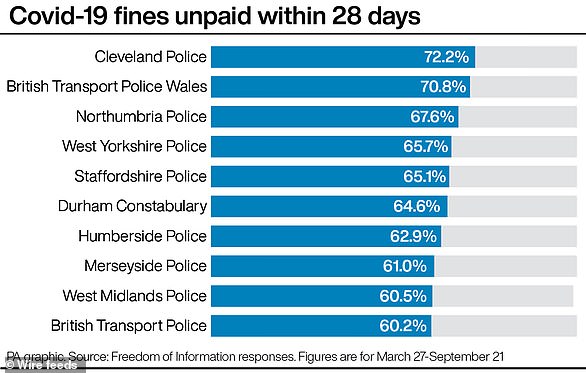 When fines go to court they are means-tested, meaning the recipient’s ability to pay is taken into account.

He has now written to policing minister Kit Malthouse for a ‘rapid response’, claiming the Government had failed to provide the police with ‘workable Covid legislation’.

Nottinghamshire’s Labour police and crime commissioner Paddy Tipping said he was ‘surprised at the guidance from the NPCC’, having received a written commendation from Home Secretary Priti Patel for being the first force to issue a super-fine.

Mr Jamieson said he also found the situation ‘deeply embarrassing’ personally, having himself been an ‘enthusiastic’ supporter of the introduction of tough rules.

But gym owners embraced the ‘brilliant’ news and claimed it ‘validates’ them trying to stay open and shows ‘what the government has been doing has been ridiculous’.

It was previously disclosed that about half of fines nationally went unpaid in the 28-day period, although chairman of the National Police Chiefs’ Council (NPCC) Martin Hewitt said this proportion is similar to other fixed-penalty notices.

People who receive a coronavirus fine can appeal in the first instance to the police force that handed out the penalty, to try to get it withdrawn.

This was also true for British Transport Police in England, which withdrew 40% (131) of fines.