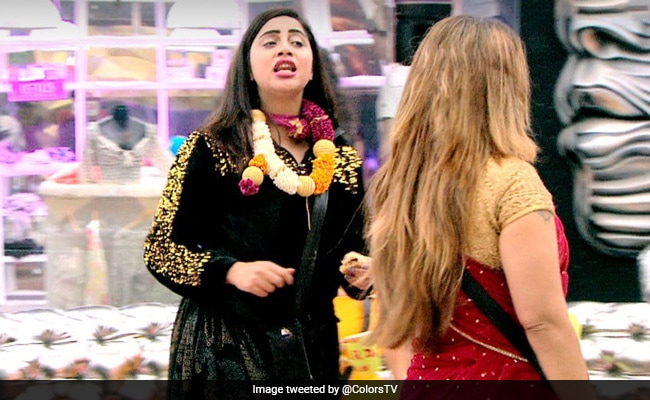 Bigg Boss 14: Arshi Khan in a still from the show. (courtesy Colorstv)

In tonight’s episode of the popular TV reality show Bigg Boss 14, Vikas Gupta had to leave the show after his health condition deteriorated. Bigg Boss announced the news of Vikas Gupta’s exit from the show to all the contestants. Arshi Khan, who had sour relations with Vikas Gupta, got emotional and said that she had no idea that he was suffering so much. For the uninitiated, last month, Vikas Gupta was voted as the captain by Arshi Khan, because of whom he was ousted from the show. Vikas Gupta had pushed Arshi Khan in a swimming pool after she made a comment on his family. He returned to the game a few weeks ago.

In another segment of the show, Bigg Boss halted the captaincy task of the week because both the teams broke the rules of the task. He later gave the contestants a second chance to compete for the task. He asked all the inmates to nominate four contestants, who would be competing for this week’s captaincy task. Abhinav Shukla, Nikki Tamboli, Rahul Vaidya and Eijaz Khan were shortlisted for the task. They were also given a special privilege. All four of them had to pick one contestant each as their hairstylist. Rahul picked Aly Goni as his stylist. Rubina styled Nikki Tamboli’s hair, while Rakhi Sawant massaged Abhinav Shukla’s hair. Sonali Phogat styled Eijaz’s hair.

In another segment of the show, Rubina Dilaik schooled Eijaz Khan about rationing and added that she is concerned about his health. Her remarks did not go down too well with Rahul Vaidya and Eijaz Khan. An angry Eijaz asked Rubina “to get lost” and not to tell him what to do. Later, Eijaz gave hifive to Rubina while she was speaking. Rubina warned him not to do this ever again. “Don’t touch me without my permission, Eijaz Khan. Don’t touch me,” she said. Rubina’s husband and co-contestant Abhinav Shukla intervened and told Eijaz, “Do not come close to my wife. No physical touch.” The four contestants will be competing for captaincy tomorrow.

Watch this space for more updates on Bigg Boss 14.