Gun store owners across the country have reported a big increase in sales in the two weeks preceding Joe Biden’s inauguration as Second Amendment lovers stock up amid fears of the new administration’s policies.

Firearm sellers in states such as California, Virginia, Tennessee, Montana and Florida have seen lines stretching out the door with some buyers camping out from 2am to beat out the crowds before supplies run out.

Many are reporting a shortage of firearms and ammunition as manufacturers bump up their prices to profit from the demand, and restrictions are placed on sales to prevent stocks from completely drying up.

While the rush for more guns first hit in March last year as the pandemic began, gun retailers say that the incoming Biden administration has caused even more people to begin panic buying.

Biden has promised to introduce gun control policy while Vice President Kamala Harris has a history of implementing gun control. 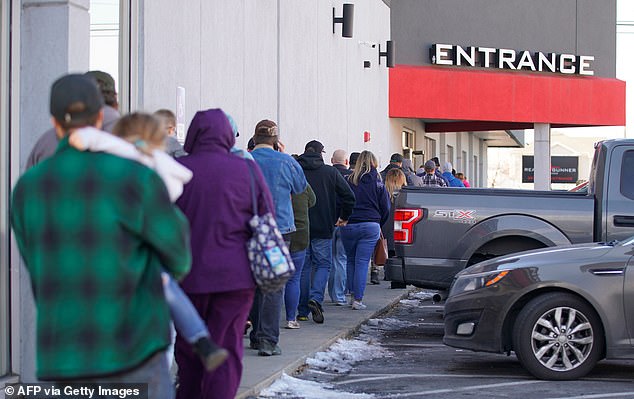 People line up to buy guns and ammunition at the Ready Gunner gun store in Utah on January 10. The days leading up to Biden’s inauguration have seen an increase in sales 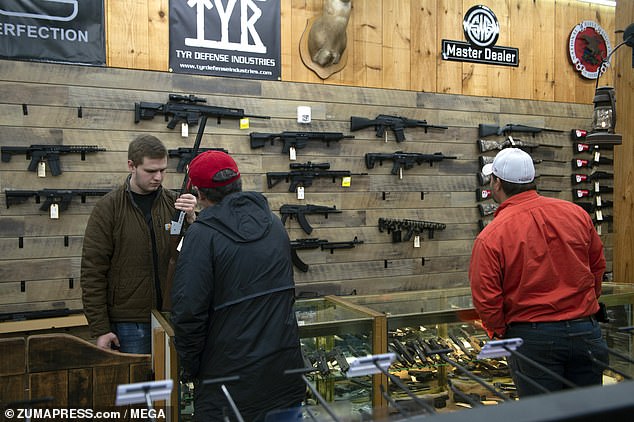 Gun owners are concerned that the Biden administration is about to limit their rights. Pictured, a gun shop n Georgia which has seen increased demand in the past few days 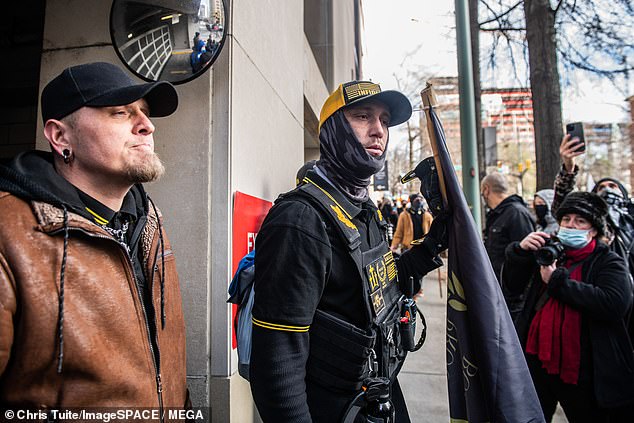 Second amendment rallies, such as the one pictured above in Virginia on January 18, are popped up across the country as gun owners fear the incoming Biden administration

Last year was a record one for gun sales as the pandemic, as well as months of protests and unrest, saw more Americans than ever deciding to purchase a firearm.

According to Business Insider, the FBI said it processed a record 39.7 million firearm background checks in 2020, the most since it began recording data in 1998.

Yet the demand has only grown further in 2021, according to Fox 35, as stores across the country are selling out of ammunition, especially 9mm.

‘I think we all believe Biden is going to take it away from us too,’ Florida shopper David Godkin told the station.

He waited on line outside Academy Sports + Outdoors but was still not able to pick up everything he wanted.

‘I got two 9s, which is the handgun, then I got the 223, which is the rifle. A good day. Would have been a better day if I’d gotten all 9s,’ Godkin explained.

Ron Perkinson, owner of Volusia Top Gun in Lake Mary, Florida, said that his store had been a ‘zoo’ after the pro-Trump riot stormed on the U.S. Capitol attempting to overturn the election results on January 6.

Perkinson said sales had already been up 100 percent as a result of the pandemic but that it was now up another 100 percent with 60 people often waiting outside for him to open up the store in the mornings.

‘When Trump had mentioned a peaceful transfer of power, whatever exactly it was he said, seems like it’s been even more crazy than the crazy it was,’ Perkinson said.

‘I could have done 300% more if I had the inventory. I’m turning away a lot of people just for lack of inventory.’ 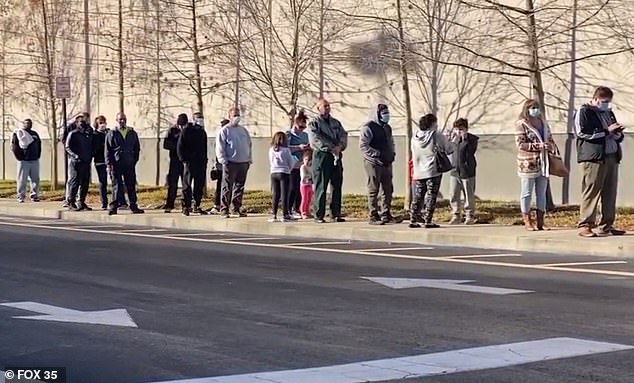 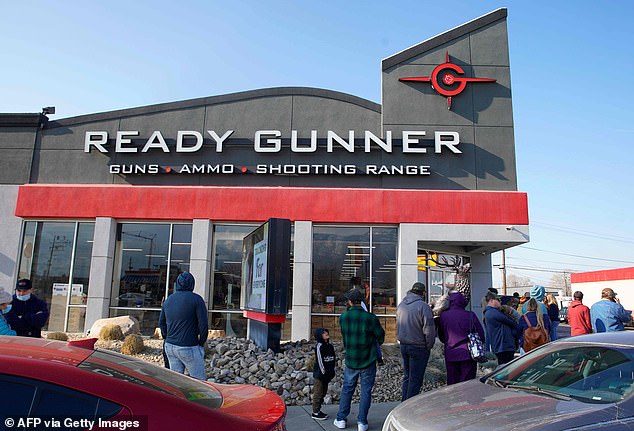 Ammunition and guns sales have spiked in Utah in the past week, as pictured 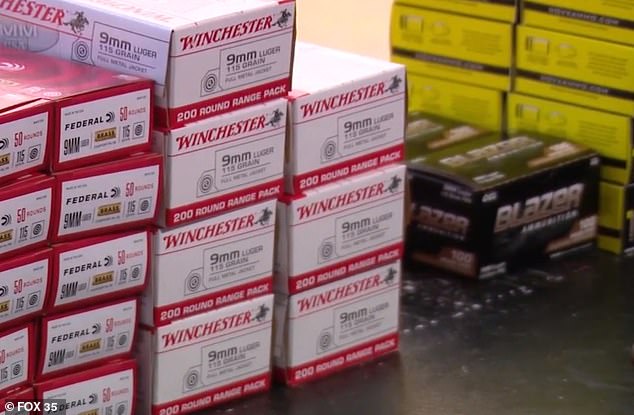 Store owners have been forced to hold back supplies of 9mm ammunition, pictured

Certain items are more popular than others, such as handguns, which he says are sold before they can even hit the gun case with a waiting list established.

The demand has caused manufacturers to tie him into new contracts as they raise prices.

He told Fox 35 that a small box of 9mm ammunition was selling for $14 maximum at this time last year but is now selling for $37.99.

In California, Danielle Jaymes, general manager of Poway Weapons & Gear in Poway, told Forbes that she is being forced to ration purchases of 9mm ammunition to 100 rounds per day.

‘People will take whatever they can get because supplies are so limited,’ she said. ‘If I had a million rounds of 9 mm right now, I could sell it in two days.’

Glock handguns are also selling so fast that she can’t keep them in stock.

‘We’re selling a lot of ARs,’ Jaymes added. ‘I really can’t keep the ARs on the wall. A lot of people are worried about the assault weapon ban we’ve heard our President-elect and our Vice President-elect talk about.’

Kristi Manning, the owner of Carter Shooting Supply in Tennessee, told WRCBtv that people who were on the fence before about purchasing a gun are now taking the jump. 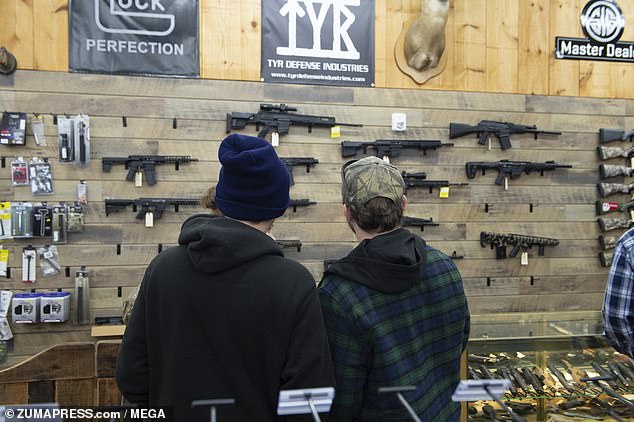 Pictured, customers look at semiautomatic rifles for sale in North Georgia on January 16 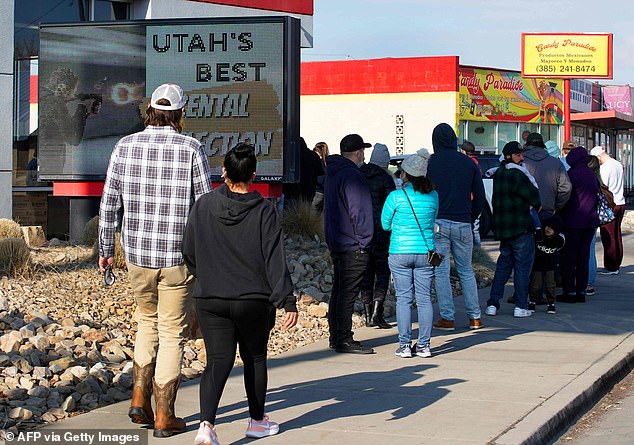 Pictured, the lines outside a Utah gun store on January 10

‘Everybody just gets scared. Even people who are maybe on the fence about buying a gun, get scared because they don’t want their right to have it taken away, so therefore they’re going to get it ahead of time,’ she explained.

After running her business for the past 21 years, Manning added that she had never seen the same hit to her supplies as she has over the past year.

‘There is no supply,’ she said. ‘Coronavirus, the riots through the summer, and then the election, so it’s kind of been three major buying frenzies, all in the same time frame.

‘With the Democratic president being elected and the House and Senate both going democratic, it’s kind of amped things up,’ she claimed, adding that she saw the same trend when Clinton and Obama came into office.

Tennessee alone had a 41 percent increase in background checks for firearm sale during election month in November over the same month a year prior.

The number of background checks increased every month last year with an increase in checks on women, the younger generations and first-time owners.

In Virginia, firearm policy reporter Stephen Gutowski posted a picture to Twitter showing the restrictions that have now been put I place in a local store.

‘There are still lines outside my local gun shop. And they still have basically no ammo available. Demand here, at least, remains through the roof,’ he wrote.

‘This store, All Shooters Tactical in Woodbridge, Virginia, didn’t have a single pump-action shotgun available for sale (though they had other guns available). Sharpshooters up the road in Lorton, Virginia had a handful of pump-actions.’ 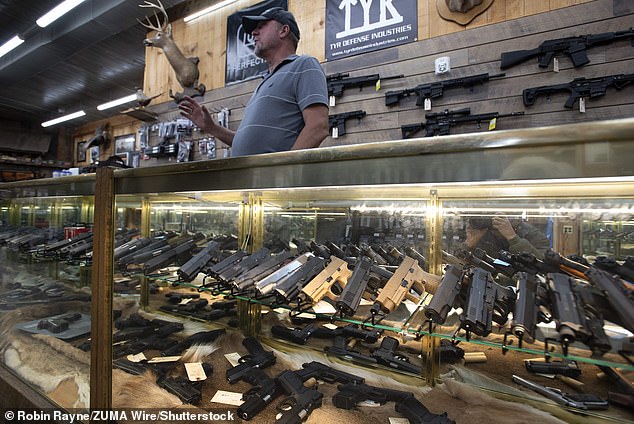 Certain items are more popular than others, such as handguns, as pictured above 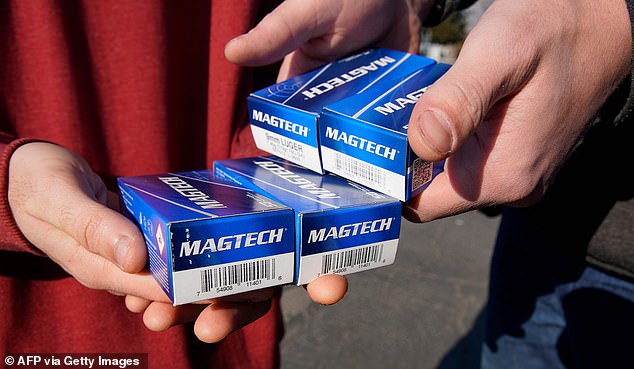 Elsewhere in Montana, James Mitchell, owner of Mitchell Supply in Great Falls, revealed that while the demand had been high for a while, the last week before the inauguration definitely saw a further uptick in sales.

‘With the election going the way it did, yes, we knew people would be concerned. Especially since they keep talking about limiting gun rights,’ Mitchell told WRKTV.

‘They want to get it while it’s still legal and while they can purchase it.’

The surge in purchases comes Biden and Harris not only take the White House, but as Democrats control both the Senate and the House.

Biden has said he will ban assault rifles for the civilian market and also high-capacity magazine, which are already banned in certain states.

He also promised to repeal the Protection of Lawful Commerce in Arms Act, introduced by the Bush administration in 2005 to shield gun makers from wrongful death lawsuits.

The removal of the act could cause severe damage to the industry. 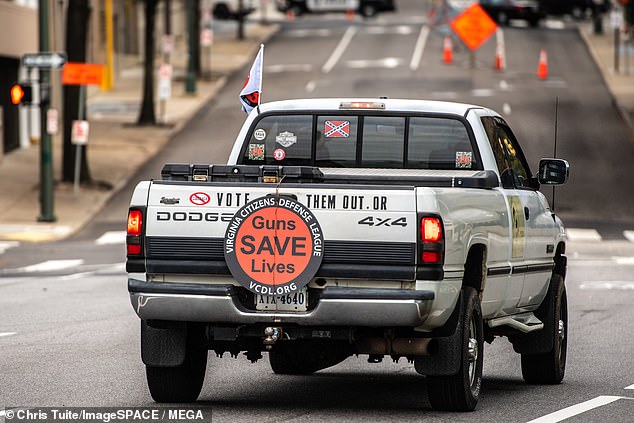 ‘Especially in light of recent civil unrest, it does appear likely the incoming administration will pursue such legislation in the near future,’ Rommel Dionisio, a gun industry analyst for Aegis Capitol, told Forbes.

‘I believe the Democratic Party victories in the Georgia runoffs for the Senate certainly position the Biden administration well for potentially passing a significant series of gun control measures through the Congress.’

He added that ‘proposed bans of modern sporting rifles and high-capacity magazines, not seen since 1994-2004 when first passed by the Clinton administration, could be enacted once again.’

Mark Oliva, public affairs director for the National Shooting Sports Foundation, agrees that the Democratic administration will do everything possible to quickly pass gun control legislation.