Bed Bath & Beyond will cut back on coupons in an effort to boost profits, as a company official admitted there’s an ‘overreliance’ on the customer perk.

The big-box retailer has become synonymous with its well-known and popular coupons that reach customers by mail, email and text messages – but the company has now made strides to change that reputation.

It comes after Bed Bath & Beyond announced it would close 63 stores by the year’s end cut 2,800 jobs over the next two years. 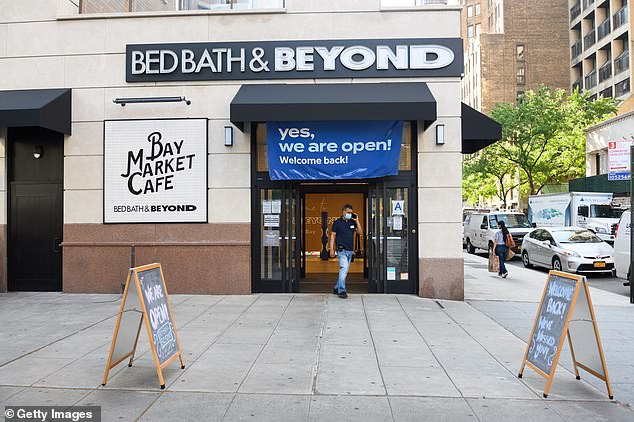 ‘Today, we have an overreliance on the coupon,’ said Chief Merchandising Officer Joe Hartsig, per CNBC.

The company told investors that it studied 405 million customers’ baskets and 285,000 items to discover that 40 per cent of promotions were ‘ineffective.’

Frequent shoppers could have a hard time adjusting to the new full-price promotion model – potentially turning them away – but the new operation model targeted a different audience.

CNBC reports that the company has attracted 1.4million new customers because of the pandemic. More people sought out cleaning supplies and wanted to fix up their home as Americans spent more time inside.

Pictured: A Bed Bath & Beyond coupon that has become synonymous with the company

Those new customers were on average six years younger and 20 per cent less likely to rely coupons.

‘The Company will use data and insights to build discipline into the use of promotions, to increase return on investment and remove ineffective promotional activity,’ Bed Bath & Beyond wrote in its initial press release.

CEO Mark Tritton, who was appointed in November 2019, asserted that the coupons would be used as ‘a strategic advantage’ that will ‘leverage [them] as a true strength.’

The company hoped the new strategy could survive any short-term growing pains.

‘This is very much like ending an addition: It’s sensible and brings benefits in the longer term, but it may hurt in the short term,’ Neil Saunders, managing director of GlobalData Retail told CNBC.

‘Financially, this is a necessary move as coupons erode margins. However, many Bed Bath & Beyond customers love coupons, so scaling them back may have an impact on shopper numbers and sales’.

That notion was reflected in Bed Bath & Beyond’s stock price after the investor meeting on Wednesday.

The companuy’s stock price on Thursday morning was down 12 per cent in a staggering plunge. 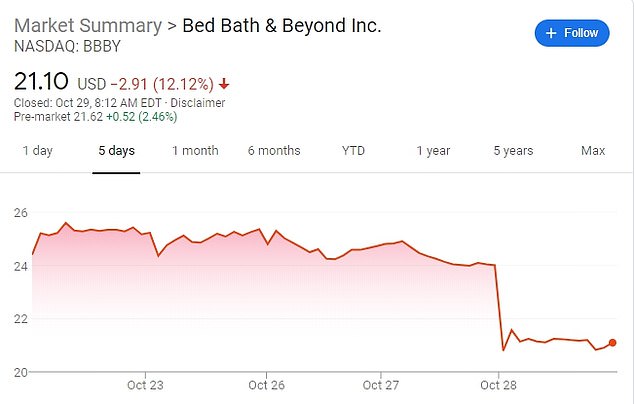 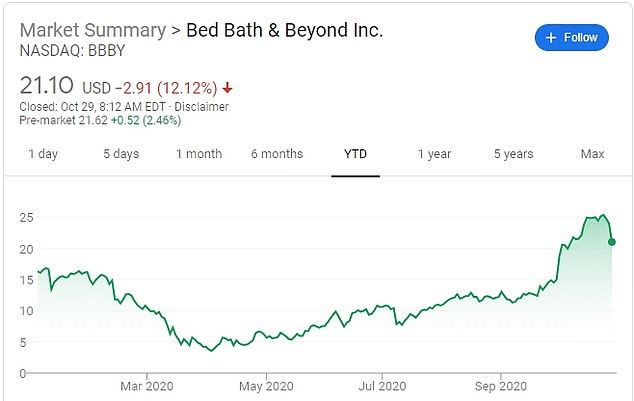 Pictured:  a year-to-date graphic of Bed Bath & Beyond’s stock shares show it began a consistent recovery amid the pandemic

The company’s stock, like so many other businesses and industries, took a steep dive in March due to the COVID-19 pandemic, but it had made promising steps in the months since then.

Stock rose more than 38 per cent this year to create a market cap of $2.7billion.

Bed Bath & Beyond’s three-year financial roadmap revealed that it expected to sustain same-store sales in fiscal 2021 and increase by 2023.

Company officials also planned to make $1billion to $1.5billion in capital investments by 2023 to complete a number of intiatives, including remodeling stores and improving e-commerce operations.

‘Bed Bath & Beyond will continue to create a more inspirational, omni-always digital and in-store shopping experience, building on the recent launch of Buy-Online-Pickup In-Store (BOPIS), Curbside Pickup and Same Day Delivery services which have helped convert more than 2 million customers to shop more than one channel this year.’ the press release stated. 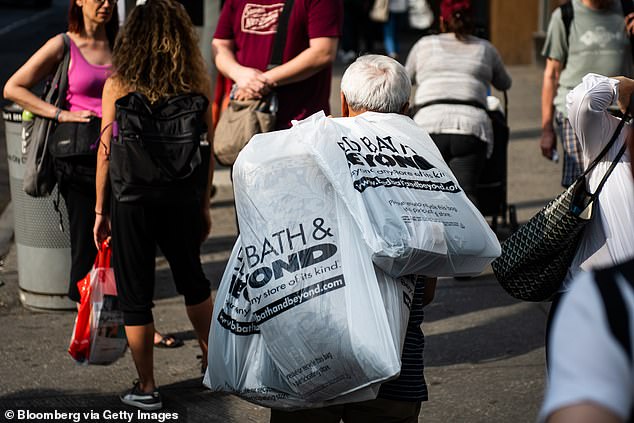 Neil Saunders: ‘Many Bed Bath & Beyond customers love coupons, so scaling them back may have an impact on shopper numbers and sales’